Good morning from another brisk morning in Asti!

Between the Beastie Boys’ Sabotage thundering in my head and yearning for an old board game, this Nordstream episode beats the band.

Before I begin, let’s check in with your friend and mine, Jim Rickards: 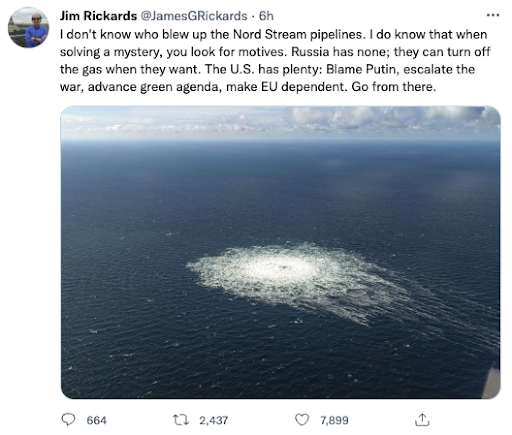 As sensible as ever, so let’s start there.

Yesterday, some state or non-state actor blew three holes in Nordstreams 1 and 2.

Nordstream 1 was operational, but the Russians took it offline for “maintenance.”  Then they shut it down for good over Western sanctions.

Nordstream 2 never received the German license it needed to become operational thanks to the Russian special military operation (SMO) in Ukraine.

This is a picture the Danish military took of the leak.  It’s about a kilometer wide. 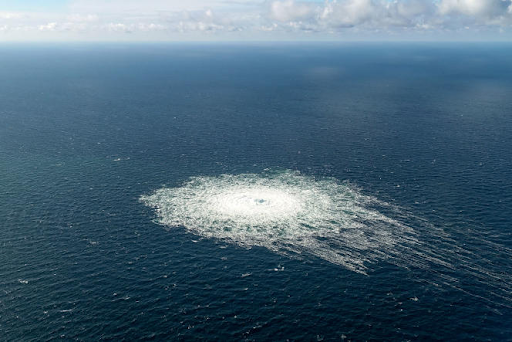 Both pipelines still contain gas under pressure, which explains why they’re leaking.

But they weren’t delivering any fuel to Europe.

If there’s one thing everyone agrees on, it’s that the act was deliberate and not “of God.” 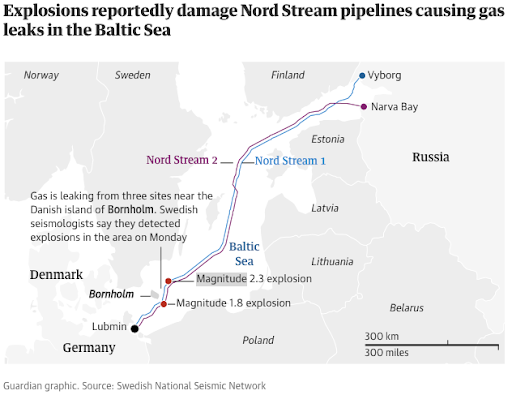 The pipes are thick and deep, as well.

The pipelines have a constant internal diameter of 1.153m, according to Nord Stream.

So sabotaging Nordstream isn’t the act of amateurs.

We have one obvious candidate in Russia that would do something this dastardly, at least in Western eyes.

And I'll take this opportunity to look at a few of the other candidates.

Everybody in the west automatically assumes Russia did this.

And why is that?

Ukraine is completely innocent, and the United States is just helping the helpless.

That's the narrative that the MSM and the West have been feeding everybody since this war started.

But Russia doing this doesn't make any sense. 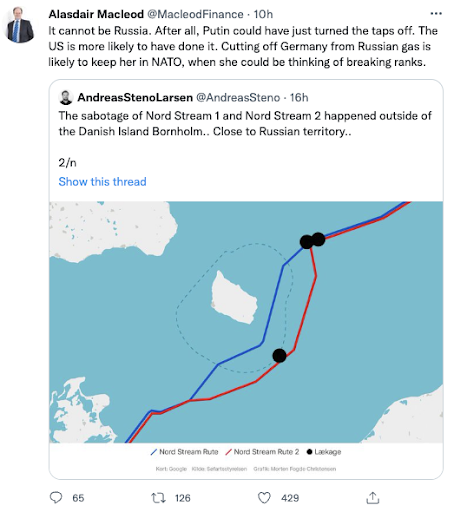 All Russia must do is turn off the taps, which is what they did anyway.

Let me remind you that Nordstream 2 was not activated because the Germans wouldn't issue a certificate allowing it to come online at the behest of its DC Masters.

And Nord Stream 1 was down to a trickle, before the explosions.

Thanks to my friend Swedish Yo, I can see one motive Russia had to do this.  They can claim they were attacked and can move naval assets into the area.

With that said, Russia blowing up its own pipelines seems a bit fatuous to me.

Now, could they have done it to frame the United States?

And if that's the case that they've done a hell of a job because the United States looks guilty as sin.

Here is President Biden talking about how Nordstream 2 is never going to happen if Russia invades Ukraine.

Here is a video of America's Sweetheart™ Victoria Nuland, telling the world that Nordstream 2 was “one way or another” not coming online. 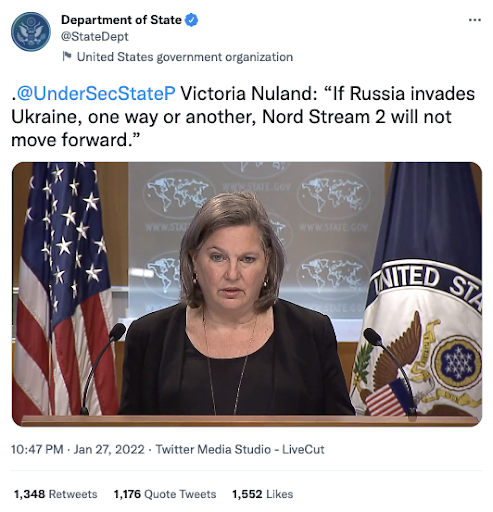 Here is Gonzalo Lira in this fantastic Rumble video explaining why it's actually in America's interest to blow up Nordstream 2.

Of course, I don't know if they actually did it.

But thanks to the high-level threats issued by the President and his Under Secretary of State for Political Affairs, it looks like America had plans to do this.

And if you want a full explanation of America’s motives, watch this video of Condi Rice from back in the day.

What really didn't help was Poland's former foreign minister thanking America on Twitter. He's been married for 30 years to Anne Applebaum, who is a Pulitzer Prize-winning writer for The Atlantic.  And a fierce Putin critic, of course.

It's a really bad look.

Of course, the American “elite” would be high-fiving because now American LNG will have to go to Europe somehow, some way to keep the place warm.

And, Norway will have to pump more gas through the pipelines into Europe.

Denmark will have to do the same.

Russia pretty much now is cut off from Europe.

But here's the thing, Russia doesn't really care because Russia is selling oil to China and India who desperately need that oil and gas.

What about the Ukrainians?

The Ukrainians certainly could have had a hand in it, but these explosions were so far beneath the water's surface that you need a proper navy to do it.

So that rules them out, other than playing a bit part, perhaps.

Let’s face it: America benefits massively from this.

If you look at the Heartland Theory of Halford Mackinder, America is on the periphery right now.

Eurasianism is on the rise.

And that is the main point of this argument.

America is on the verge of obsolescence.

It’s ironic because the very thing that allowed America to breathe and to grow in its infancy, its geographic isolation, is now its Achilles' foot.

And you wouldn't think that geography matters that much in our highly interconnected world.

But this version of our interconnected world is not terribly globalized and raw materials matter.

So, he who has the raw materials runs the world.

America, bountiful and rich with its amber waves of grain, is not the only player in town, especially when it comes to rare earths, potash, and oil.

Conclusion: Europe now requires American LNG and it keeps the US in the game.

So, this is either a Russian operation or an American operation, or even a British operation.

Nah… the Brits wouldn’t dare do something like this without American approval and help.

I don't know for sure who did it.

Likely, we won’t find out for another 10 years, when someone accidentally unlocks a file.  Or there's a new Julian Assange or a new Edward Snowden who blows a whistle.

But it looks bad for all sides, and it's an intense escalation of the conflict.

In the words of Indiana Jones, “Now you're getting nasty.”

With the world like this, I miss the old days, where my biggest problem was figuring out if Colonel Mustard did it in the study with the candlestick.