I wished you a Happy Hump Day yesterday, even though it was a Thursday.

Sorry about that… you can lose track of time in paradise.

But the good news is Friday’s here - and it’s indeed a happy one!

I’m starting to think this conflict will get resolved sooner rather than later.

In yesterday’s not-Hump-Day edition, I wrote about how Europe kept making bad decisions about everything.

In today’s, I can talk about a country in Asia that is making the right decisions for itself and its people.

And that might hasten the end of this conflict.

The fact is, we have to deal with Russia and its abundantly cheap energy.

I’ve covered how India makes tons by buying Russian crude at a discount.

But now we’ve got another winner.

It’s a country very close to Russia, at least distance-wise.

Let’s talk about Japan and why it may hold the key to a Western policy review.

Japan is a collection of giant lava rocks formed on the Ring of Fire arc.

It’s a gorgeous country, easily the most beautiful in Asia.

Japan is also the most technologically advanced country on that continent.

But that’s not because Japan is resource-rich.  In fact, because it’s just a bunch of rocks, it’s got little to no natural resources to exploit.

So Japanese foreign policy simply must be one of trade - and the freer, the better.

And that indeed was Japanese policy from when they decided to modernize in the 19th century.

In the late nineteenth century, Japan's economy began to grow and to industrialize rapidly. Because Japan has few natural resources, many of its burgeoning industries had to rely on imported raw materials, such as coal, iron ore or steel scrap, tin, copper, bauxite, rubber, and petroleum. Without access to such imports, many of which came from the United States or from European colonies in Southeast Asia, Japan's industrial economy would have ground to a halt. By engaging in international trade, however, the Japanese had built a moderately advanced industrial economy by 1941.

On the start of World War II, he continues:

The Roosevelt administration, while curtly dismissing Japanese diplomatic overtures to harmonize relations, accordingly imposed a series of increasingly stringent economic sanctions on Japan. In 1939, the United States terminated the 1911 commercial treaty with Japan. "On July 2, 1940, Roosevelt signed the Export Control Act, authorizing the President to license or prohibit the export of essential defense materials." Under this authority, "[o]n July 31, exports of aviation motor fuels and lubricants and No. 1 heavy melting iron and steel scrap were restricted." Next, in a move aimed at Japan, Roosevelt slapped an embargo, effective October 16, "on all exports of scrap iron and steel to destinations other than Britain and the nations of the Western Hemisphere." Finally, on July 26, 1941, Roosevelt "froze Japanese assets in the United States, thus bringing commercial relations between the nations to an effective end. One week later Roosevelt embargoed the export of such grades of oil as still were in commercial flow to Japan."8  The British and the Dutch followed suit, embargoing exports to Japan from their colonies in Southeast Asia.

Roosevelt and his subordinates knew they were putting Japan in an untenable position and that the Japanese government might well try to escape the stranglehold by going to war.

In short, the Japanese have seen this horror movie before and have moved to secure their energy supply by importing Russian oil and gas.

This is of paramount importance because the Japanese people have no appetite for nuclear power.

I was living in Singapore on March 11, 2011.  Pam and I had just moved into our new apartment on Fort Road, and we just had a home cinema installed.

It was my pride and joy.

I realized the 90” HD screen and an HD projector were the same price as the swanky television I wanted.

So we went with the screen.  My goodness, it was so much fun to watch sports on that screen.

But on that fateful Friday, news broke of a monstrous wave hitting the east coast of Japan.

Pam and I watched on our new massive screen with horror as the wave completely overtook the shoreline and encroached on the land.

Our friends who lived in Japan at the time said they had never felt shaking like that in their lives.  And that was in Tokyo, hundreds of miles away.

While I bash Germans who have moved to abolish nuclear power in their home country, I feel great sympathy for the Japanese.

I still think their thinking is wrongheaded, but I understand the fear.

Be that as it may, Japan refusing to use nuclear power puts them at greater risk of energy disruption.

And that means they need Russian energy now more than ever.

Reality Bites Both East and West

So it should come as no surprise that the Japanese have resumed importing Russian oil.

From The Economic Times (India):

In June, imports fell to zero as local refiners started to phase out Russian crude amid Ukraine-related sanctions.

While the ministry did not disclose the exact volume, it said July oil imports from Russia were 65.4% lower than the same time last year. The volume of liquefied natural gas (LNG) imports from Russia also decreased by 26.1% compared to July 2021, while coal imports dropped by 40.1%.

Now get this: despite the decline in physical volumes, the value of Russian fuel exports to Japan increased by 45.1% compared to last year due to rising global commodity prices.

That’s what idiotic sanctions do for you!

Not only that, but Japan had never stopped importing Russian natural gas.

From the Financial Times:

“We cannot use many nuclear power stations therefore the supply and demand balance of the power industry is quite tight,” he told the Financial Times.

“Nowadays, the spot market of both LNG and coal is quite expensive. That is one of the reasons why Japan is so reluctant to stop the LNG imports from Russia.”

This makes perfect sense, as Japan isn’t willing to put its economy at risk for misguided Western policy.

(Though it should, and hopefully will revise its nuclear energy stance.)

It also makes sense from a geographical perspective.

As I wrote in the Rude edition, “Got Rubles?”:

The “what’s happening” I’m referring to is the shift away from the USD and USG dominance of policy.

But it contradicts its stance as a US ally.

It’s too early to say whether its days as a US ally are numbered.

But we can be sure the Japanese aren’t going to take one for the team like Europe does.

I thought Europe would cave first on policy simply because I thought winter would get here before anyone blinked.

But the Japanese have put paid to that theory.

They smartly moved to secure their energy supplies, putting their people first.

It’s a shame Western governments refuse to do the same.

Before I sign off, this tweet is quite interesting.  It appears President Putin will attend the G20 meeting in Jakarta: 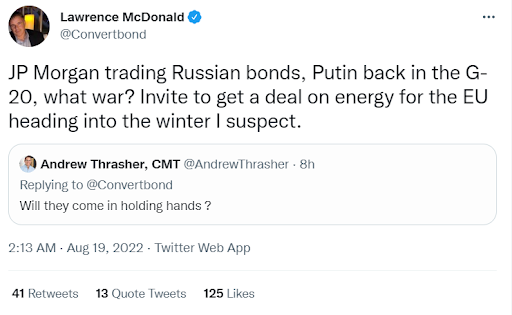 Deal or no deal?

Finnish PM Fights… For Her Right… To Party!

Happy Monday! You may not have even heard the rubbish I’m about to relay to you, but I think it’s important to understand what a bunch of snowflakes the Europeans have...