I returned to Italy last night and was promptly robbed in Milano Centrale railway station.

I’m fine; I wasn’t mugged or held at knife- or gunpoint.

But my passport, keys, and laptop are gone, probably off to Syria to feed a family.

But that does mean I’m back on my Mac after months of using my late, lamented Dell PC.

My chubby digits are trying to get used to my Magic Keyboard again.

But my phone was in my pocket, thank heavens, and it alerted me to Putin’s nuclear threat.

It’s a subject that deserves serious and sober reflection.

So if we’re all here tomorrow, I’ll have a comment ready for you.

In the meantime, I’ll stick to nuclear power.

But from the view of heat and warmth rather than mass destruction.

My most excellent colleague, Rick Barnard, sent me the below question from one of his top subscribers:

I have a question stemming from a recent article done by Sean Ring (he's so entertaining to read by the way). The title of the article was 'Japan Resumes Buying Russian Oil' posted on the 19th of August.

The article gave the impression that Japan had 'no appetite' for nuclear power. I have been listening to a few different people, including Rick Rule, and got the clear impression from him and others that Nuclear is indeed welcomed and is set to play a large role in the Japanese Energy Sector moving forward into 2023.

Could you clear up this confusion for me? Perhaps I misread the article.

Many thanks for all that your team does, a treasure trove of analysis.

First, many new Rude readers have come from our sister publications.

I’m flattered and grateful that any stick around to read my daily scribblings.

Second, thank you for the kind words, R.

Third, no, R, you didn’t misread my article at all.

But it’s time to update my position, and I thank you for alerting me to this.

In short, the Japanese have seen this horror movie before [Fukushima] and have moved to secure their energy supply by importing Russian oil and gas.

This is of paramount importance because the Japanese people have no appetite for nuclear power.

It seems I was a bit hasty.

To be fair, this opinion poll on “Opinion on nuclear power generation in the future in Japan as of October 2021” came out firmly against nuclear: 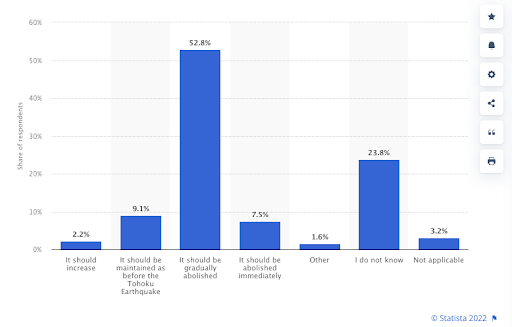 In October 2021, 52.8% of respondents wanted nuclear power in Japan to be abolished gradually.  7.5% wanted it abolished immediately.

Only 11.3% thought it should either increase or be maintained before the big quake.

Nearly a quarter wasn’t sure.

This is what was in my head when I wrote my piece.

But I should’ve known better.

Even the Japanese don’t want expensive energy in the name of “safety.”

But a poll that came out in March 2022, which I missed, showed a very different answer: 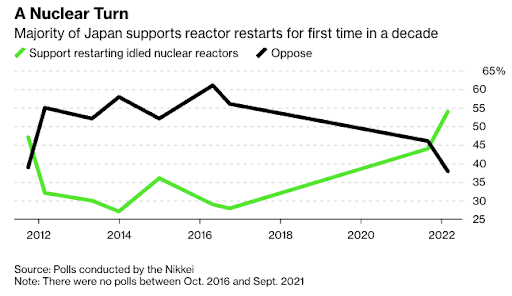 To be fair, only a slight majority (53%) want nuclear restarted.

But it’s a big move from 45%, as Japan’s energy costs skyrocketed.

“There are no solutions. There are only trade-offs.”

But the Japanese seem to be saying that they’re willing to incur the “risk” of nuclear power rather than be dependent on Russia for its energy imports.

Luckily, their Green lobby isn’t as powerful as Germany’s.

The German Greens are anti-nuclear, anti-natural gas, and anti-oil.

They just need more unicorns pooping out omnipotent rainbows, and the energy problem would be solved!

My Mac Protects Me

I don’t know if my computer is protecting me, but most of the articles on Google’s page 1 about Japan going back to nuclear are dated after August 19th, when I wrote that article.

Except for this one, which I clearly missed:

That article is dated August 17th.

Prices are important not because money is considered paramount but because prices are a fast and effective conveyor of information through a vast society in which fragmented knowledge must be coordinated.

They’re not as bad as Europe’s, but they were expensive, to begin with.

Being an island with few resources, Japan simply can’t take hits like this.

So We’re Ready to Go?

Unfortunately, Japan’s reactors aren’t getting turned on that quickly.

Only last week, Japan’s the head of Japan’s nuclear watchdog shut that down.

In an interview with Bloomberg News, Toyoshi Fuketa, chairman of the Nuclear Regulation Authority, said the following nuggets:

Determining natural-disaster risk at nuclear power plants “intrinsically takes a long time,” making it difficult for operators to make management decisions on how much time and money they are willing to invest.

“Utilities are being asked to prove something extremely difficult, which is that their facilities are able to bear forces of nature. The process isn’t something that can be dramatically sped up.”

“Our job as a regulator is to not be influenced by an ongoing debate on whether to use or not use nuclear power.”

That leaves Japan a bit more dependent on Russia than it would like.

Japan was forced into attacking the United States in World War II over resources and doesn’t want the same situation arising again with Russia.

From libertarian writer and historian Robert Higgs in the earlier Rude piece on the start of World War II:

The Roosevelt administration, while curtly dismissing Japanese diplomatic overtures to harmonize relations, accordingly imposed a series of increasingly stringent economic sanctions on Japan. In 1939, the United States terminated the 1911 commercial treaty with Japan. "On July 2, 1940, Roosevelt signed the Export Control Act, authorizing the President to license or prohibit the export of essential defense materials." Under this authority, "[o]n July 31, exports of aviation motor fuels and lubricants and No. 1 heavy melting iron and steel scrap were restricted." Next, in a move aimed at Japan, Roosevelt slapped an embargo, effective October 16, "on all exports of scrap iron and steel to destinations other than Britain and the nations of the Western Hemisphere." Finally, on July 26, 1941, Roosevelt "froze Japanese assets in the United States, thus bringing commercial relations between the nations to an effective end. One week later Roosevelt embargoed the export of such grades of oil as still were in commercial flow to Japan."  The British and the Dutch followed suit, embargoing exports to Japan from their colonies in Southeast Asia.

Roosevelt and his subordinates knew they were putting Japan in an untenable position and that the Japanese government might well try to escape the stranglehold by going to war.

Japan won’t risk this happening again with the Russians.

A special thanks to R for a stimulating look at Japan’s energy situation.

But I simply don’t think nuclear will get back online by 2023.

There are too many hoops to jump through before then.

That’s what regulators are there for, though I suspect the Japanese public wants energy price relief much faster.

Nevertheless, I’ve updated my view and am grateful for R’s input.

Have a wonderful day!