Why I’m Still Bearish on the Broad Market

Someone turned on the AC in Asti!

Good morning from freezing Northern Italy, where temperatures have dropped precipitously over the last few days.

That should goose energy prices, which is one of the few things I’m bullish about. I’ll leave that happy dust until the end, though. That way, you can go on about your day with some optimism.

But first, coffee and misery.

Yesterday we had our midweek editorial call, and it was fascinating. There are the usual extroverts like Dan Amoss, Byron King, and me yapping away. That’s the standard operating procedure.

But yesterday, in the red corner, was Paradigm’s publisher Matt Insley. And in the green corner was the inimitable Alan Knuckman, whose Yankee enthusiasm surprised even me.

Matt was on the verge of committing seppuku. Remind me not to let him enter any contests whose prizes include a set of steak knives.

To him, there’s just no good news out there.

As a Rude reader, you’d think I’d naturally side with Matt… and you’d be correct. I’ve been down on the markets for all of 2022 and into this year.

But Alan scolded - yes, “scolded” - us for being too pessimistic.

Alan said, “There’s lots to be bullish about! How are we going to make money today?”

I realized two things at that moment.

One was I am bullish on some things. But if those things aren’t reflected in the equity indexes, it’s certainly possible to be both bullish and bearish while remaining consistent.

The second thing I realized is that I may miss opportunities by having my horse blinders on.

If a pessimist is an optimist with better information, then I ought to be better at finding opportunities.

Keep that in mind as we go through the points in this edition of the Rude.

A Quick Look at the Broad Market. 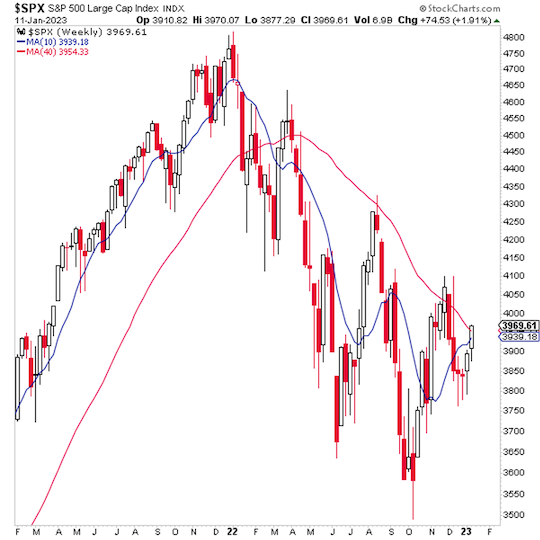 I look at it and say, “Mostly lower highs and lower lows.”

If we zoom into the SPX daily chart, the SPX price has snuck up above the 50-day moving average. We’ve also had two higher lows lately (November and earlier this month), and that’s positive.

But we’re still not above the 200-day moving average.

Until we are, we must remain cautious. 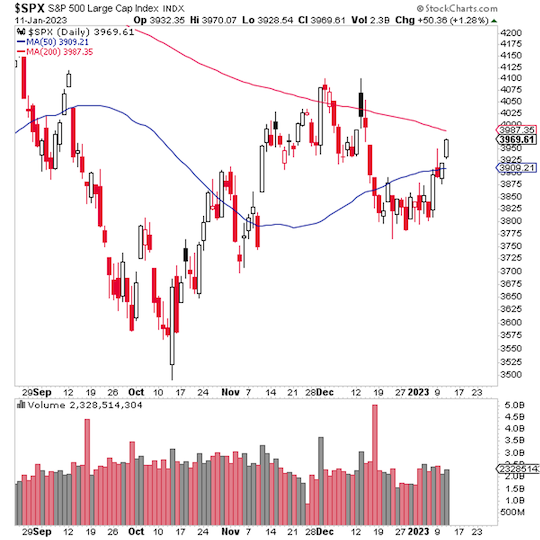 The Nazzie is even worse off vis-a-vis the 200-day moving average.

Although you can argue the FAANNGs have mostly recovered or have at least bottomed out. 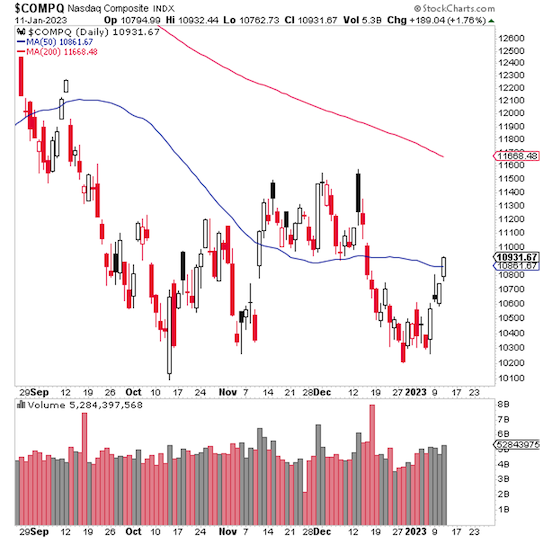 Although you can argue the FAANNGs have mostly recovered or have at least bottomed out. 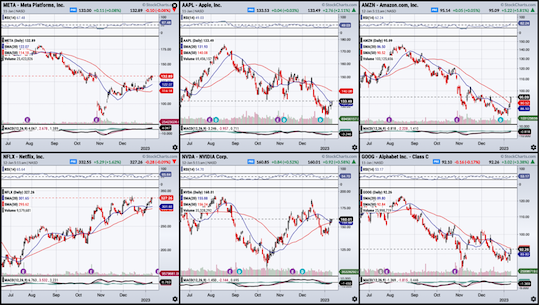 The only equity index story that looks good overall is the Dow.

That index is unambiguously bullish.

But the charts are only part of the story.

A Look at the Macro Environment: All Eyes on the CPI.

I think we’ll surprise to the downside. That’s not because I think the inflation story is over - far from it.

We’re at a part of the cycle where we’ve had a bit of a recovery, and the prices of raw materials like natural gas and oil are down.

The other big number coming in today is initial jobless claims. Last time, it was 204,000. This time, they expect 210,000. Any surprise to the downside is terrible because the Fed will interpret it as a tight labor market. That makes it more likely the FOMC will keep hiking.

But it’s not all bad, so let’s get to the bullish news.

It’s Not All Bad - 3 Things to Be Bullish About.

I mentioned earlier that it’s possible to be bullish and bearish simultaneously while maintaining consistency.

Specifically, I’m bullish about energy and metals, which barely appear in the broad market indexes.

Let’s take each in turn.

Now that I’m freezing again, I think we’ll need some gas to heat us up in Europe.

There’s no way the upward trend was going that way forever, which is part of why we’ve had such a terrible six months.

But this may be the bottom.

I see us heading back up to $6 from here. 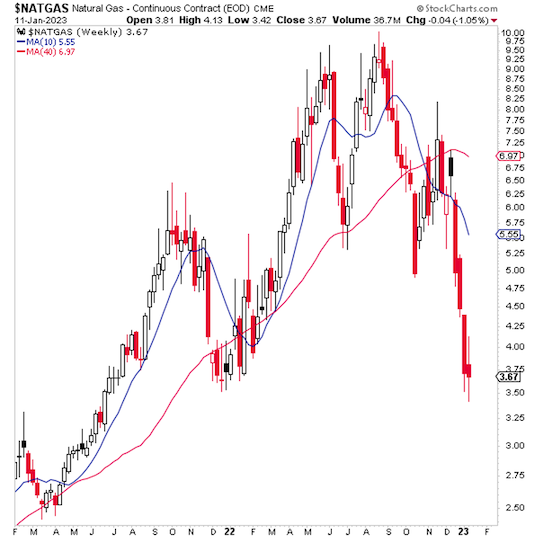 Industrial metals as a whole usually go up during expansions and down during recessions.

But this time, we’ve had supply shortages driving the prices up, not demand pushing prices up.

You can see from the below chart that industrial metals as a whole look good. 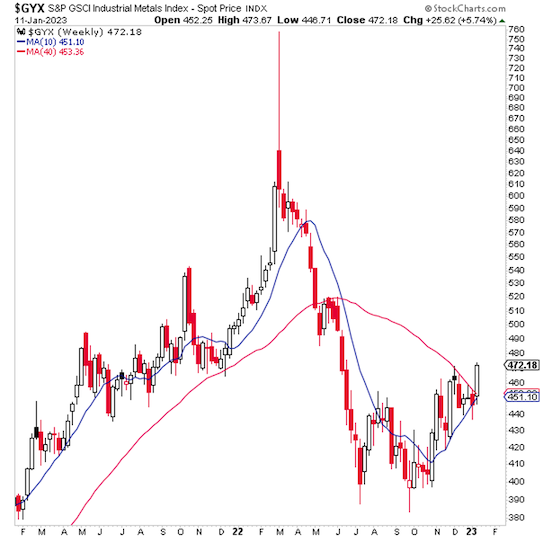 But there are two metals in particular that we like.

Let’s not call it “Dr. Copper,” as its diagnostic powers have waned.

But thanks to supply shortages, copper has re-entered the range I used to highlight on the monthly asset class reports.

You may remember copper was as rangy as anything could be. 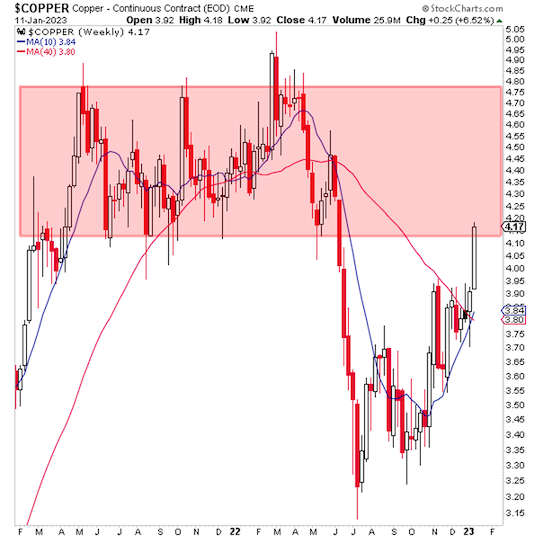 Another base metal that’s looking great is aluminum.

Its chart is in rude health, as it has rallied over $17 just this week.

Aluminum has all sorts of industrial uses, including transportation, construction, packaging, electrical, and consumer products. 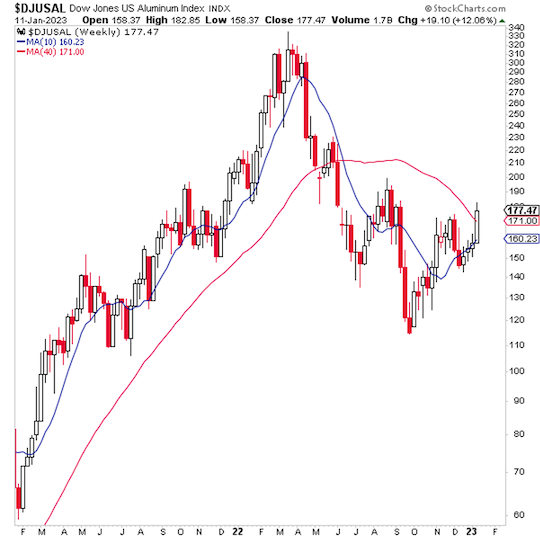 So, there you have it.

I like natural gas, copper, and aluminum. But since none of those companies show up in the equity indices, I’m bearish on those.

If you agree, I’d start researching companies that are “pure plays” on those commodities. We may see each other at some point!

I’m still not sold on equity indexes, but that’s just me.

Have a wonderful day ahead!

A Perfect Bullseye: The CPI Splits the Arrow.

It’s almost too good to be true, but the CPI didn’t surprise.