Good morning!It was a glorious weekend here in Asti. I hope yours was, too.Swiss friends are heading over the Alps to Northern Italy for lunch.Thats one thing I love about Europeans. Theyre happy to travel and visit, even if its just for a few hours.So pizza, pasta, and gelato are on the menu for today. Some wine, too, Im sure.Austrian Economics will creep into the conversation, as well.The Swiss know a thing or two about wealth protection. Protecting the value of the Swiss franc used to be at the top of the list.Unfortunately, even their elite have fallen prey to silly money printing schemes.As I think about inflation and its horrific consequences, I believe were living through an experiment manifesting these effects right before our eyes.In this edition of the Rude, Ill define inflation and show how it diverts your money from buying what you want to buying things you dont want.Like war.

The Country and The State

The great libertarian economist and theorist Murray Rothbard wrote The Betrayal of the American Right.Its a great bit of history we dont get taught in school.The book details how The New Right of William F Buckley usurped the right wing from The Old Right of America, which included HL Mencken and Albert Jay Nock.At this point in history, Americas right-wing went from laissez-faire individualism to the interventionist quasi-socialists we unfortunately know today.In this book, Rothbard quotes intellectual Ralph Bourne from his book, Untimely Papers:

Crying, War is the health of the State, Bourne declared:

Country is a concept of peace, of balance, of living and letting live. But State is essentially a concept of power. . . . And we have the misfortune of being born not only into a country but into a State. . . .

The State is the country acting as a political unit, it is the group acting as a repository of force.

International politics is a power politics because it is a relation of States and that is what States infallibly and calamitously are, huge aggregations of human and industrial force that may be hurled against each other in war.

When a country acts as a whole in relation to another country, or in imposing laws on its own inhabitants, or in coercing or punishing individuals or minorities, it is acting as a State.

The history of America as a country is quite different from that of America as a State. In one case it is the drama of the pioneering conquest of the land, of the growth of wealth and the ways in which it was used and the carrying out of spiritual ideals.

But as a State, its history is that of playing part in the world, making war, obstructing international trade punishing those citizens whom society agrees are offensive, and collecting money to pay for it all.

And collecting the money to pay for it allBut how does The State do that?

John Q Publics definition of inflation may be the best: 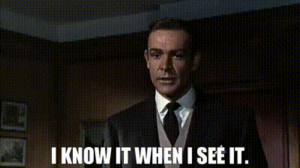 Inflation, as this term was always used everywhere and especially in this country, means increasing the quantity of money and bank notes in circulation and the quantity of bank deposits subject to check. But people today use the term `inflation' to refer to the phenomenon that is an inevitable consequence of inflation, that is the tendency of all prices and wage rates to rise.

Mises was referring to John Maynard Keynes, whose definition of inflation was a sustained rise in the average price level.But to Keyness credit, he also disliked inflation (while simultaneously referring to the gold standard as a barbarous relic, unfortunately).From Keynes on Inflation, by Thomas Humphrey:

Keynes argues that inflation is a method of taxation which the government uses to secure the command over real resources, resources gained by ordinary just taxation as real as those obtained. What is raised by printing notes, he writes, is just as much taken from the public as is a beer duty or an income tax.

Inflation is a way for the government to make you pay for their policies.

What Dont You Want?

Sure, no one wants war except for the neocons.

But the neocons cant pay for it all by themselves.

So they need to steal the money.

There are only two ways to finance the war.

One way is direct taxation.

Can you imagine a further surcharge on your tax bill?

So governments resort to the other more insidious method of taxation.

By inflating your currency.

And this inflation comes at the expense of what you do want.

Its the very definition of economizing.

You spend more on the stuff you need, such as food, shelter, and water.

You spend much less on what you want, like shopping and holidays. Those things the warmongers consider frippery.

What Are the Results?

We all know energy stocks have roofed it.

Thats one way of you paying for whats going on.

And whats also not a surprise is less talked about but plain as a pikestaff: consumer discretionary stocks are getting crushed.

The consumer discretionary sector comprises businesses that sell nonessential products and services that consumers may avoid without any major consequences to their well-being.

Unlike consumer discretionary goods, consumer staples products, such as food, beverages, and tobacco, are goods that consumers tend to buy regardless of where the economy is in its business cycle. 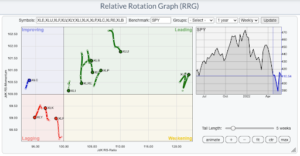 We intuitively know this is terrible news.We want cheap food, shelter, and energy. Were happy to pay a bit more for the stuff we want.But weve got the opposite situation now.On Saturday, Stanberry and Associates Steve Sjuggerud posted in his Daily Wealth newsletter a tweet by Steven Strazza, who works for JC Parets at allstarcharts.com:

He also showed the chart Strazza posted, following up on this tweet: 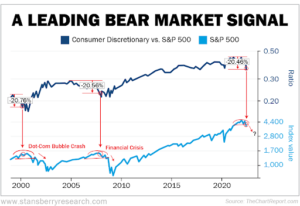 Not great, is it?And I hasten to add Strazzas boss is far more bullish than he is.But as more of a hybrid macro chartist, I think theres a lot more pain ahead.Suckers rallies will undoubtedly abound, but well head down from here.

The government is robbing you via inflation to pay for the stuff they want (war) instead of what you want.Its an awful situation.Now, these effects are plainly appearing in stock prices.And this type of pricing foretells a huge correction and recession.The American people need to get a grip on their government before this gets out of hand.But it may already be too late.Until tomorrowAll the best,Sean

Amazon’s Stock Split and What It Means For Investors