With the recent upheaval in China education stocks and other Chinese stocks that are listed on the New York Stock Exchange, I thought I'd break down the structures which make it so easy for the CCP to take American money and just set it on fire.

Little did I know, and perhaps I'm very much at fault here for not recognizing this, but the structure of Chinese internet stocks on the New York Stock Exchange are not in the form of ADRs (American Depositary Receipts), they are in the form of variable interest entities (VIEs).

Perhaps youve heard of them...

That may or may not mean something to you, but the last entity that famously used SPVs was a little company called Enron.

It's amazing how this works.

The reasons why VIEs are used are because China forbids foreign ownership of many of its companies and US investors want access to Chinas growth rates.

It's the most ridiculous deal of all time.

But Wall Street has this unbelievable penchant for coming up with solutions to these issues.

After all, Chinese companies need American capital and American investors have been chasing yield for years now so they need are Chinese equities that are roofing it again.

By one estimate, more than 100 VIE companies now command about US$4 trillion of capitalization in MSCI China Index. US-based investors could hold as much as US$700 billion worth of them, according to a government report in July.

So they came up with this ridiculous structure. Heres a schematic of it: 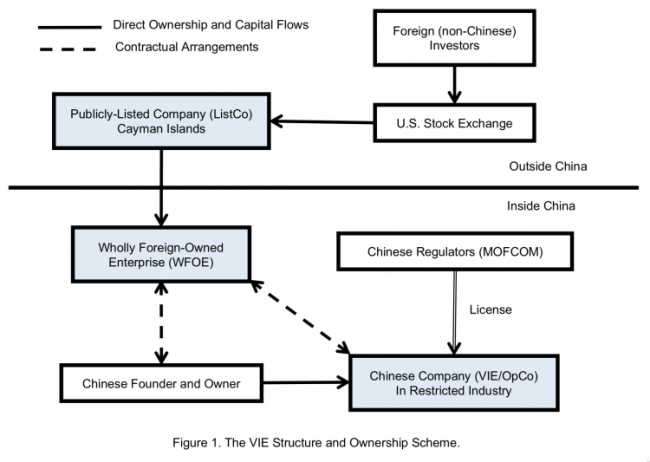 What happens is that American investors buy that stock on the New York Stock Exchange during its IPO phase. Then that company takes that money and it deposits that to the wholly foreign owned enterprise inside China.

The Chinese founder and owner and the Chinese company in that restricted industry have contractual arrangements with that wholly foreign owned enterprise.

But American investors don't actually own the company in China.

Of course, the CCP is very happy about that because they don't want foreign ownership, but they want the capital. So they make out just fine.

But of course this blows up spectacularly when China turns its very profitable companies into non-profits overnight by government decree.

Not only are regulators ignoring this, but the global accounting community is, as well. According to both IFRS and US GAAP, when you look up the listed VIEs, you get the Chinese companies financial statements.

You may have heard of the American depositary receipt, but let me explain them quickly.

It's actually quite understandable to think that these Chinese companies were in the form of ADRs, because we have many American depositary receipts.

ADRs are dollar-denominated claims on foreign assets. As you can see from the diagram below, a UK company like Vodafone, which does have an ADR on the New York Stock Exchange, decides it would like access to American capital.

Its important to note ADRs were developed at a time when really the most free capital in the world was America's.

(The only thing more embarrassing than America being as rich as it was, is how it lost its lead in being the world's richest nation.) 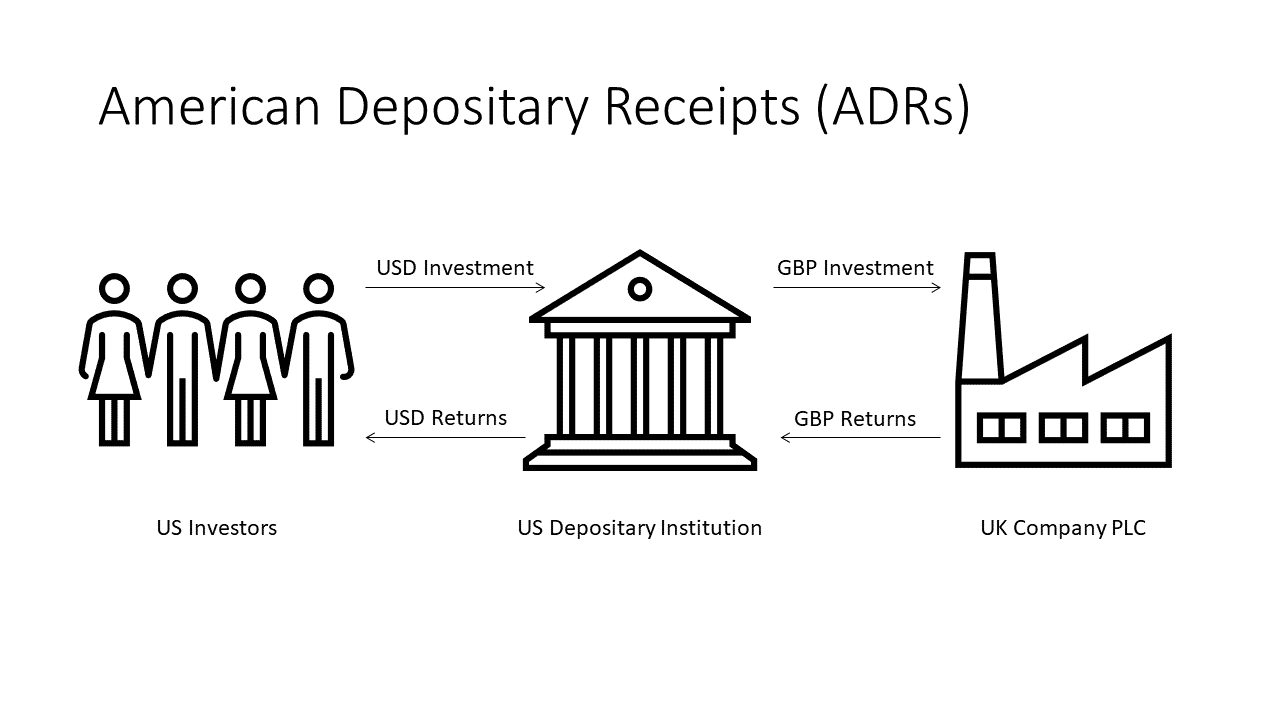 US depository institutions such as Bank of New York Mellon, Bank of America, or State Street took a lead role.

Those banks are very good at custodial activities.

So they would actually purchase the London-listed shares of Vodafone.

Then theyd issue on the back of this, a paper called the ADR that says, 10 shares of Vodafone equals 1 ADR.

So legally you do in fact own a piece of Vodafone and you get your capital gains and dividends that'll get converted over into USD.

Of course, you have FX risk, but the structure is very legal, very tight. And you do indeed have a claim on those assets in the form of ownership.

With variable interest entities, you simply do not.

And it's funny because this is exactly the same kind of shell game that Enron played before it blew up. It used to just park its losses offshore and no one could see their financial statements because they weren't consolidated in their company financials.

In this situation, however, and this is a huge failing on the part of the regulators, the Chinese stock is actually registered as ownership even though you don't actually own anything.

You just kind of have a stock that is a VIE that is not ownership. It's all very frightening, to be honest with you.

While I'm at it, we've just talked about VIEs and ADRs, let's talk about SPACs.

I don't want to confuse you with acronyms today, but you would have read about SPACs already.

A special purpose acquisition company (SPAC) is a corporation formed for the sole purpose of raising investment capital through an initial public offering (IPO).

Once the company is formed, it has another 18-24 months to buy another company.

Now, again, this is another ridiculous structure. We're seeing a lot of lawsuits here lately because the company has no history.

The only thing it really has is a management team.

It has no track record for it to run on.

You're just asking investors to give you money, to make an acquisition later on.

By the way, those investors don't even know what that acquisition is going to be.

Investors like Chamath Palihapitiya are big fans of this structure.

Yes, if you get in early and people don't know what's going on, you're going to make a lot of money.

But now there are a lot of lawsuits with regards to SPACs because SPACs don't return anywhere near the money that investors expect them to return. 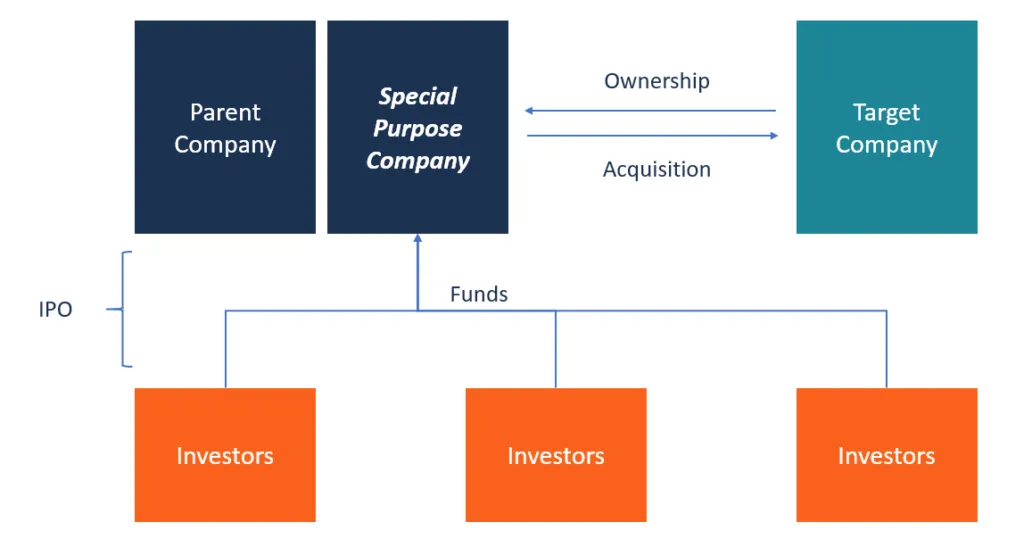 So between variable interest entities, American depositary receipts, and SPACs, we have an alphabet soup of potential fraud if you don't know what you're dealing with.

Stay safe out there because it is very dangerous and your regulators currently are not protecting you.

Have a great day.

The Red Passport and the Blue

Its Thursday - just one more to go.My blue passport arrived. Im feeling good, but not as thrilled as I used to.I love Europe, not the EUAs you Rude readers...