Good morning on this fine Tuesday!Now that most of our bureaucratic paperwork is done, I start my Italian language lessons in earnest today.Itll be nice to give my brain something new to chew on.At my age, keeping the intellect from going stale is job one.I tend to love any subject that gives me an unexpected brain boost.And boy, did Stuart Kirk smack me in the chops yesterday.Unlike most of the whiners and criers out there - including his CEO, Im sure - I watched Kirks entire presentation on the idiocy of investors worrying about climate risk.The talk was 16 minutes and 25 seconds of substantiated opinion from a man who clearly ran the numbers.Kirk is - for the moment - the Global Head of Responsible Investing at HSBC Asset Management.His gutless CEO Noel Quinn suspended Kirk for the speech, probably based on the footnotes his sycophantic underlings provided him.For what?What could Kirk possibly say at a conference his bank was sponsoring that would get the woke crowd baying for blood?

Kirk Gets Truthy - And Worse For the Woke Mathy

Before I get started, all the slides Im showing are from Kirks speech, screenshot from YouTube.The title of the presentation was Why investors need not worry about climate risk.That shouldve given his higher-ups a clue about his views.After all, Kirks presentation was approved internally two months before he gave it.He started his speech with particularly pointed words for former Bank of England Governor Mark Carney, whos become the new Al Gore.Unsubstantiated, shrill, partisan, self-serving, apocalyptic warnings are ALWAYS wrong, was that slides title.He noted that climate change hysterics like Carney must out-hyperbole others to lengthen their careers, fly around to conferences, and get funding for their pet projects.Ouch.Kirk then points out that asset prices have gone up while the warnings have gotten more frequent. 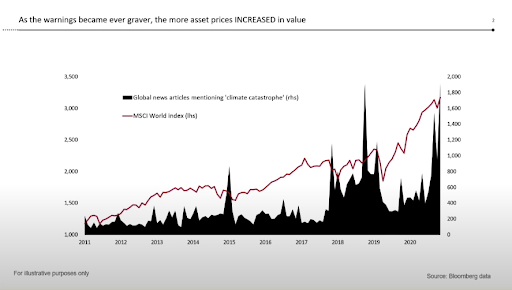 Of course, correlation doesnt imply causation.Idiotic central bank policies and reckless fiscal stimulus are responsible for a great deal of asset price inflation.But Kirk asked if the world were genuinely ending, wouldnt asset prices have collapsed by now?Who cares if Miami is six meters underwater in 100 years? Amsterdam has been six meters underwater for ages, and thats a really nice place, Kirk said.An Australian newspaper (who else?) said his numbers were incorrect.For fun, I ran the numbers.Amsterdam is only 2 meters below sea level.But the lowest point in the Netherlands is indeed 6 meters below sea level.Lets not split hairs.Kirks point is that well adapt and cope with the changes.The Dutch certainly have.Anyway, Miami real estate prices may give you a clue about how investors down there feel about climate risk.

Miami property investors look about as nervous about climate change as the Obamas did when they spent $11.75 million on their Marthas Vineyard estate.But more immediately, Kirk pointed out the average bank loan length was only six years.So why would climate change - which theoretically would be disastrous in 20 or 30 years - even factor into the loan assessment? 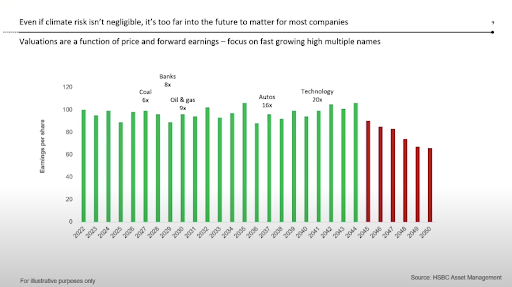 Kirk also pointed out in the above slide that climate change risk - even if its not negligible - is too far into the future to matter to valuations.But of course, its not negligible, you say?Thats another point that drew the ire of the professional worrying class.Kirk pointed out that central bank climate change models had to factor in an unrealistic interest rate rise to make the numbers look truly apocalyptic.His slide demonstrating that point was titled, Its easy to show that climate change is an investment risk if you engineer a bond market collapse. 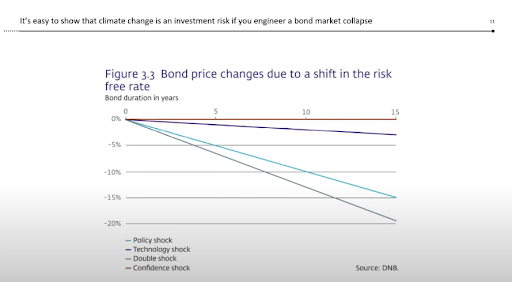 Kirk ended his presentation with this slide: 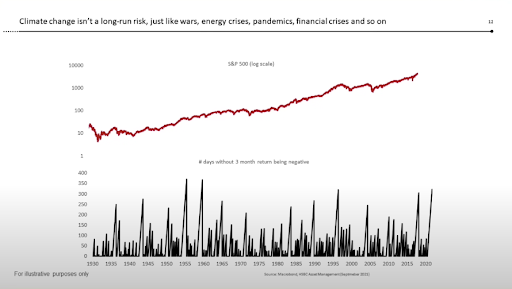 He remarked that we dont know what innovations will happen in the future to mitigate climate change risk.It seems Kirk is an anti-Malthusian.

Malthus Was Wrong The Second He Printed His Pamphlet

Malthus is catnip to quants.His 1798 An Essay on the Principle of Population proves to those ignorant of later economists findings the earth is always on the brink of destruction.Why?Because Malthus alleged that geometric population growth would outstrip arithmetic food supply growth.Quants love words like geometric and arithmetic.Theres just one problem: Malthus was wrong on both counts.Malthus never provided calculations for the arithmetic growth of food and the geometric growth of populations. It was a blind guess.Experts have pointed out that the current growth rates are inconsistent with Malthuss predictions.The great economist Joseph Schumpeter destroyed Malthus in his History of Economic Analysis by writing that Malthus held:

that population was actually and inevitably increasing faster than subsistence and that this was the reason for the misery observed.

The geometrical and arithmetical ratios of these increases, to which Malthus seems to have attached considerable importance, as well as his other attempts at mathematical precision, are nothing but faulty expressions of this view which can be passed by here with the remark that there is, of course, no point whatever in trying to formulate independent "laws" for the behavior of two interdependent quantities.

The performance as a whole is deplorable in technique and little short of foolish in substance.

Weve escaped the Malthusian trap in three significant ways.Population growth has slowed so much men like Elon Musk think population collapse is more of a problem than growth.Food production has dramatically changed.In many cases, the food production rate has increased more rapidly than the population growth rate.For instance, in the 1930s United States, a quarter of the population worked in the agricultural sector, and the total GDP was less than $100 billion. But today, less than 2% of the population works in the farming sector, and the total GDP is more than $14 trillion.Dwarf wheat comes to mind.And thanks to global trade, we can move food around the world. Were not constrained to our own land.The big conclusion is that were not aware of the innovations our successors will come up with to combat any future issues and we cant predict them.So Kirk urged the powers that be to concentrate more on the here and now.

Im sure Kirk upset the central banking elite - an oxymoron if there ever was one - by claiming they spend too much time on climate change and not enough on managing inflation.Gee, I wonder where he got that idea! 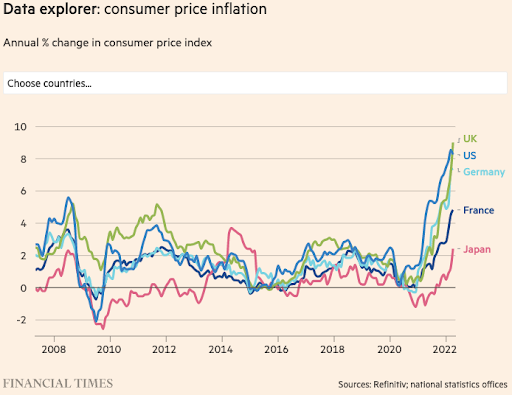 Credit: ft.comKirk also blamed regulators for giving him too much climate change paperwork to deal with.Unfortunately, that was a part of the Faustian Bargain of 2008.We bail you out. Youre now part of the civil service.

I cant encourage you enough to watch Kirks presentation on YouTube.Its 16 minutes and 25 seconds of raw, honest, and considered analysis.How would the other team put it? It speaks truth to power.Id also encourage Noel Quinn, his hapless CEO, to grow a pair.Not backing your man is such bad form.Now everyone at HSBC knows what happens if you have a different opinion.Even Standard Chartereds CEO, Bill Winters, said everyone should be free to speak their mind on environmental issues, even if executives disagree with them.Who would you rather work for?In the meantime, lets give Stuart Kirk three cheers for very publicly saying what needed to be said.Until tomorrow.All the best,Sean

An Old Man Desperate to Get Into Heaven

Former US Secretary of State and all-around awful creature Henry Kissinger has called for Ukraine to cede territory to Russia to end the war. Kissinger reminded Europe that Russias...