The Solitude of the Midnight Oil

Happy Tuesday!Its about 1 am on Tuesday morning my time as I start writing this, which is Monday afternoon your time, most likely.Ive had a few glasses of champagne and a few pints of beer.A few hours ago, a minor miracle happened.Everyone went to bed before I did.That, combined with my delicious libations, gave me a reason to stay up.And my goodness, am I enjoying it!I reclaimed ownership of my remote control.I poured another beer.And then I thought of you and figured I should start writing early.Like really early.Despite what the lamestream media tells you about giving the shirt off your back to some cause or another, I will continue to encourage you to use this time to build your resources, businesses, and income streams.While others deliriously support the current thing, you ought to worry about yourself.Its the contrarian in me, I suppose.Thats not to say you shouldnt donate to charity or support your cause.Its just about keeping at least one eye on the ball. 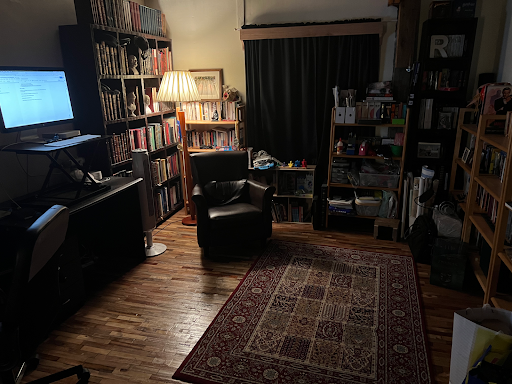 Credit: Sean RingThe above is a picture of my office nook (with my beloved chair) in my parents-in-laws new house.Its positively delightful.And its given me a great idea of what I want for the house in Italy.Theres something about the cool darkness that gets my brain going.So with this in mind, Ill start musing.

Yesterday, I indeed ate caribou tripe and testicle soup.They call it Soup No. 5 here in Calbayog.I thought Id have an immediate increase in energy.Nope.Nothing.Either my testosterone is massive already, or my guts couldnt process the soup.Ill go with the former reason for my sanity.The funny thing was that it tasted delicious!

Karaoke With the Locals

My in-laws have gone out of their way to make our stay as comfortable and fun as possible.So last night, as Soup No. 5 was simmering on the stovetop, my brother-in-law, Rommel (pronounced ro-MEL, not ROMM-el) and his buddies carried over the karaoke machine.I wont post pictures of us singing - and believe me, the videos would be worse - but it was a brilliant time.After I had a few Emperador brandies, I was more than happy to strangle the cat, myself.So, Piano Man, it was.Though Billy Joels singing range is as wide as the Grand Canyon, I gave it my best shot.Of course, everyone started to sing along, and we got suitably soused from the booze and fun.

Sitting on the Porch

Theres nothing in the world better than a bunch of men sitting around telling stories.Whether Im in an English pub drinking pints, sharing red meat and red wine in Spain, or sitting on the porch here in the Philippines, its heaven on earth to get the boys together.I think men being able to talk to each other is a lost art.Ive noticed in Hollywood movies, the heroes are also fighting each other.Really?Is that how things work?Not if you know how to talk to each other.Maybe those little whiny screenwriters in California dont know how to do it, but I think the rest of the world groks the pleasure and importance of the exercise.My good friend, the Duke of Omata, once parted this brilliant nugget:I always pay for the first round.Genius.Sure, if there are other Alphas around, you may not be able to.But at least always put your hand in your pocket first.Thats a good start.And then, just let it flow.The boys here are a hoot, with the same fortes, foibles, desires, and goals as the rest of the planet.And they are hilariously funny, as well.All that got me thinking

As I lived in five countries for at least three years each and visited another 60 or so, naturally, the boys would have lots of questions for me.One friend is trying to move his family to Canada, as that has long been viewed here as another land of milk and honey.Hes already a remote worker making good money while his kids are sleeping. He also babysits them during the day when his wife works!Canada would be my last choice in the western world, so we discussed other possibilities.And, of course, as the Ukraine situation evolves, Im curious to see how digital nomads adapt.But theres one thing Im sure of: coders, writers, content creators, and other experts will start moving around in droves.As I was thinking of this piece, I looked at my bookshelf and saw Parag Khannas Second World.I had read that book about 12 years ago.Khanna is a WEF guy and isnt a Trump fan, just to warn you.But his thoughts are interesting because he actually gets on the road.Too many writers write about places they have no clue about.Im not saying Khanna knows everything, but I trust travelers more than cubicle dwellers.Ive just read a thoughtful piece by Khanna for Time magazine this past January.There are many political points I disagree with, but the main thrust of the article is this:Location independence is the way to go.To wit:

Thats not a small number of people, and its easy to see why.The article is titled, The Brain Drain That Is Killing America's Economy.Later in that article, Khanna writes, From Tulum, Mexico, to Athens, Greece, to Phuket, Thailand, entire colonies have sprung up catering to mobile youth in search of sunny, low-tax hubs.My interpretation of this is, If you have a brain, you want to enjoy Vitamin D and low taxes.Perhaps thats a bit harsh on most of the working population.Then again, 80,000,000(!) people voted for Joke Biden.But I also think this applies not just to youth, but anyone, of any age, with some modicum of talent for which he or she can charge.In fact, I think experience will really matter in the coming years when rates rise, and unsatisfied customers punish companies by depriving them of profit.Pie in the sky stuff will be out the window.Itll be show me the money timeAnd thats where you can come in.If youve been reading the Rude for a while, you know one of our four pillars for financial freedom is to start your own online business.There has never been a better time.Whether its Covid or Ukraine, your guardian angel is sending you a message.Prepare now, so come what may, youll be alright.In the same Time article, Khanna also alleges:

A generational shift has occurred that Boomers and even older Gen-X dont quite grasp: Todays young professionals dont identify themselves by their nationalitythey identify as talent. Millennials and Gen-Z are content with portfolio careers and working abnormal hours, even for less pay, in exchange for less work and more time for travel and passion projects.

I disagree.If I, an older Gen-X dude, can write you at 3:12 in the morning with a huge, Heinken-soaked smile on my face, why cant you do the same thing in your chosen field of endeavor?I tell you such tripe as Age is just a number.But I think age has not only not become irrelevant, but your aged experience may also be an enormous advantage.

The ideas remain consistent.Get a second passport or residency, start an online business, buy a bit of crypto, and get healthy.The great copywriter Gary Bencivenga once said, Wealth is an income stream.Start creating your income streams via location-independent online businesses.Until tomorrow.All the best,Sean

Redundancy at the Expense of Efficiency

Boeing, along with many other companies, stopped doing business in Russia. Yesterdays horrific crash in China couldnt come at a worse time. If China looks more to Airbus, that...