Good morning from another windswept day in Asti.

I just can’t shake this cold. My left sinus is packed like a can of sardines.

I never thought I’d have such a tough time adjusting to the seasonal changes in Europe.

As the Aussies say, “I need to harden the f*ck up.” And that’s true.

But not until after my latest round of medicine.

Before I get into the report itself, I will give you an oversight of what private banks do.

They’re here for a reason, though many intelligent, rich folks wouldn’t use them.

However, a certain cache comes from walking around with an ATM card from a fancy Swiss bank.

Most people are after the prestige associated with owning an offshore account.

This is just a short section on ordinary folks, who comprise most accounts.

Let’s say we’ve got a college graduate named Sophia. She just graduated with a Bachelor’s in Finance and became a junior banker in the Big City.

Sophia doesn’t need all the bells and whistles a more established person needs.

Sophia only needs a checking account to deposit her paycheck and pay her bills, a savings account, an ATM card to withdraw funds, and a credit card for larger purchases.

That will start her off fine.

Sophia’s side hustle is going so well that she expands her business with five other developers and quits her banking job.

Now she’ll need a commercial or corporate account to separate her business and personal activities.

But Sophia’s ambition doesn’t stop there.

She realizes she’s excellent at digital marketing and expands her business to the point that its revenue is a few million dollars per year.

After a few years, Sophia has a robust nest egg she built for herself.

So, she starts to receive calls from private bankers who’d like to offer her more services.

Those problems are much better than poor people's problems.

But they are problems, nonetheless.

To keep it simple, I’ll explain those problems and show how a private banker would try to help Sophia.

With people in office like Joe Biden, Justin Trudeau, Rishi Sunak, and Jacinda Ardern, the entire Anglosphere and its governments are not only broke but spending ever more of other people’s money. Let’s not even get into the EU...

They'll never admit to this. So, where will the State get this additional loot to spend?

They need to go and raid your coffers. Governments will do anything to get their hands on your money legally... or questionably.

So, the most important thing a person must do when they get to this level of wealth - we'll call it over a million dollars - is to secure that wealth.

Think of it as building a digital fortress around your booty.

And how do you do this?

You do this with trusts, foundations, and companies. Sophia already owns a company. So that’s good. But her banker may advise her to move her personal wealth offshore into a trust.

Some private banks are excellent at setting up trusts for you. But many other people can.

The important thing is to make sure that your wealth is out of the government's reach.

The second thing Sophia must do is figure out where to stick all that money.

Portfolio management takes on a new meaning when you have oodles of cash.

This is where it’s good to get a feel from an expert on where to allocate that cash, whether it's in equities, bonds, commodities, real estate, or alternative investments, such as private equity or venture capital.

Much will have to do with Sophia’s time horizon. Time horizon is how long she needs to invest: is it retirement, college education, or buying a chalet in France?

Does she feel ill when you’re down 0.1% on the day? Or is she happy with investments that swing around like TSLA stock?

She needs to answer those questions honestly.

Risk ability is different in that it’s the quantification of the risk you could take on.

Questions like, “How long will your wealth last if you never work another day in your life?” and “How much of this wealth is already allocated towards plans, commitments, and liabilities?” are fundamental to answer.

Next is the management of Sophia’s tax liabilities. Growing up in a middle-class household, I never understood the difference between how rich people think and middle-class and poor people think.

For rich people, their most significant liability every year is the tax they pay.

You must ensure that you have competent accountants and lawyers that will put your money in places where they won't inadvertently trip off tax liability.

Most are excellent at this.

But she’s got to ensure their competence, so she doesn't have an unforeseen bill that would take a good chunk of her wealth away.

The third thing Sophia must worry about is succession planning.

This is one of the funnier parts because when you think about succession planning, you think, “As long as I don't go through probate, I'll be okay.”

Probate is the legal process of reviewing a will to determine its authenticity and validity.

During the probate period, the deceased person's will or the estate of a dead person without a will is administered.

Going through probate can cost you up to half the estate, depending on which country you live in.

This is why you need to put your wealth into trusts.

When Burt Reynolds died, he left nothing for his son in his will.

Not because he disowned him - far from it.

Burt had already taken care of his son through trust structures to avoid probate.

If you also own a company, you must consider who runs it after you’re gone.

Do your children want to manage it?

Does one of your kids want to manage it, and the rest want to live off it?

We’ll assume Sophia doesn’t have to worry about this yet.

I have listened to hilarious conversations about high-net-worth individuals concerning this.

For instance, in Hong Kong, a banker might talk with a high net worth individual about their “Tai Tai,” the principal wife or “Supreme of the Supremes,” who lives on the peak with his first three kids.

Then, he’s got a girlfriend in Kowloon, who no one knows about, but who’s living in an apartment the rich guy set up for her.

And then, there’s a secret second family living over the Shenzhen border.

A private banker must manage these things.

And it's challenging for them to do that because they need to figure out who wants to own what.

This becomes a crucial question and often degenerates into a ridiculous discussion between the children about who will be the company’s CEO first.

Philanthropy is vital to rich people because they've got to bribe their way into heaven.

There have been some extraordinarily generous souls in our time and the past.

David Barclay, the founder of Barclays Bank, was revered as a banker in his time because he gave so much money away to charity. He wasn't hoarding his wealth; he gave it away while he was alive, and he wasn't distasteful about it. Barclay was a model worthy of emulation.

I wish more affluent people would act like this instead of using charity as a marketing gimmick.

It's paramount for someone who's made a lot of money to figure out how they want to give it away.

All charts below come from Credit Suisse’s Global Wealth Report 2022.

First, let’s look at the level of wealth that constitutes high net worth individuals (HNWIs): 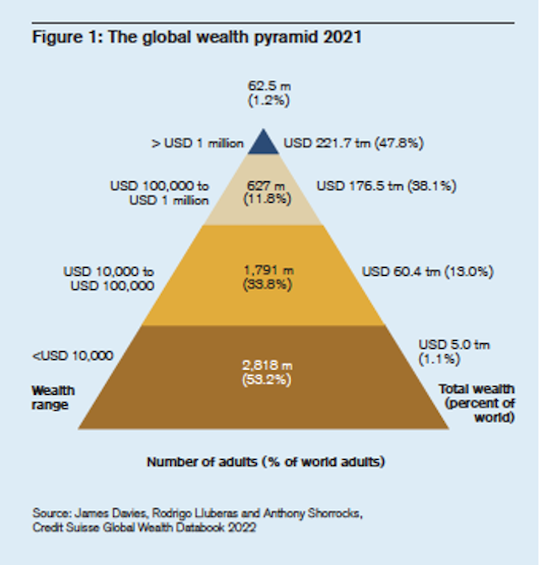 Only 1.2% of adults on the planet have a net worth of over USD 1 million. 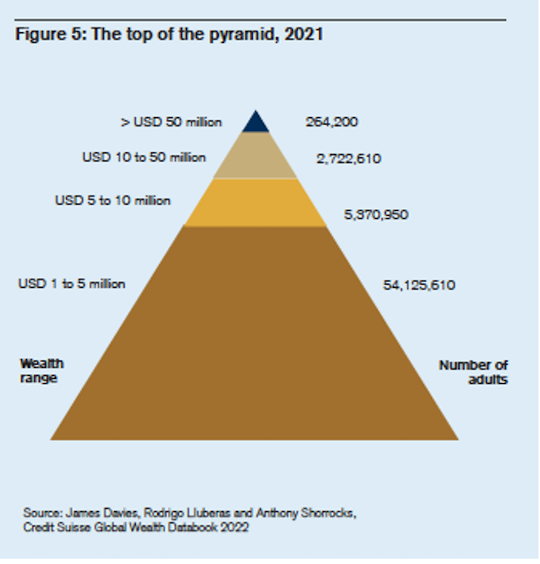 But if you break down that 1%, you can see the wildly varying amounts of wealth at the top.

Over a quarter of a million people planetwide have a net worth exceeding USD 50 million.

And most of those people live in America. 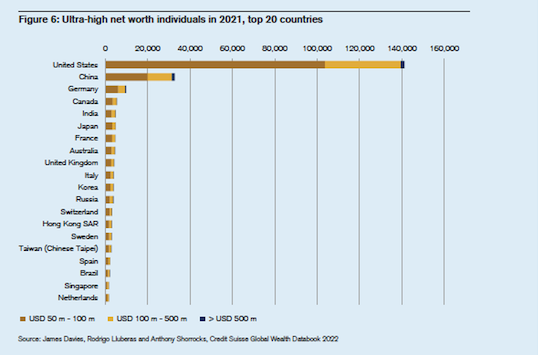 Ultra-high net worth individuals - those with a net worth exceeding USD 50 million - are mainly found in North America. 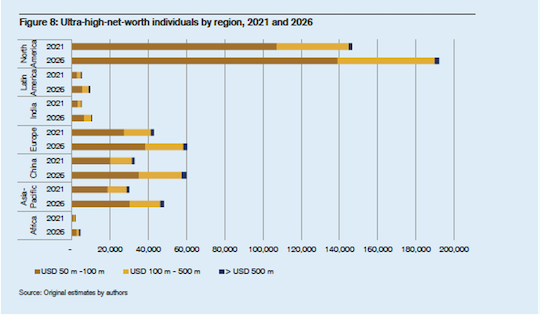 Rich people may have rich people problems, but they’re worth having!

Imagine being in a position to think about how best to manage all your money.

Those are the kinds of problems to be invited.

And I must tell you. I wish those problems on you.

Have a great day today.