I’m a nervous father, as my son, lovely though he is, isn’t exactly housebroken.

He’s an only child, spoiled in ways most rich kids aren’t, and he’s got to play nice with the other kids today.

And speaking of prayers, have you noticed the yen lately?

In this edition of the Rude, I will show you why I think US Treasury Secretary Janet Yellen may be about to pull a Robert Rubin.

Inflating the Yen Away

My goodness, the Bank of Japan may have finally accomplished what it’s seemingly been trying to do all these years: destroy its own currency.

I’ve never understood why Kuroda-san and his buddies over at the BoJ are dyed-in-the-wool Keynesians, and I never will. 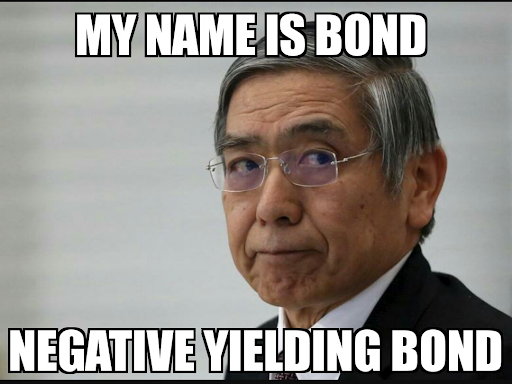 Japan has no natural resources and has to import everything.

Not only that, but Japan has a big problem: demographics.

The most beautiful country in Asia is filled with young people who don’t have children… and old people who never die.

Japan’s demographics are just dire.  In fact, Japan’s population is the only thing that isn’t inflating.  Have a look: 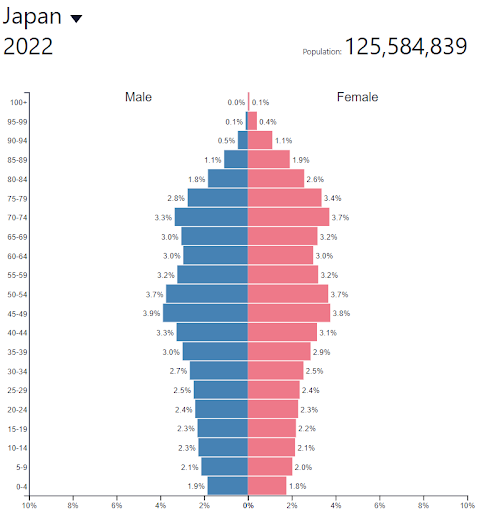 Call me crazy, but when your country is a bunch of lava rocks with nary a resource to be found and no labor force, you should be aiming for a strong currency, not a weak one.

But, no.  Not the Japanese. 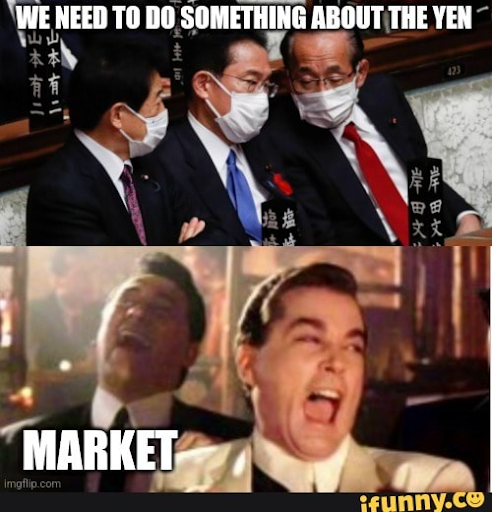 And this is where the Yanks come in.

Much to my shame, I used to subscribe to Time magazine.

In my salad days, when I was green… and all that.

When this cover came to my house, I nearly framed it: 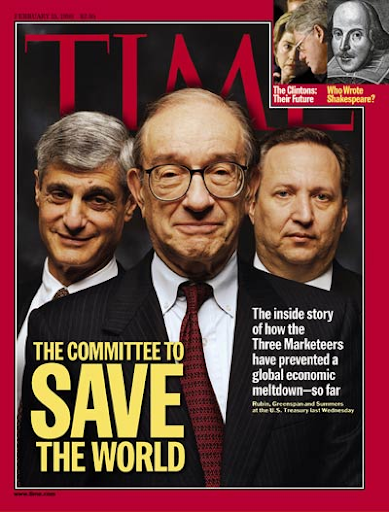 Ah, those were the days.

Such youth and stupidity.

I think most of us loved Greenspan back in those days.

The Cold War had ended.  Productivity was through the roof.

Hell, maybe it *is* different this time…

Of course, it wasn’t.

In fact, who I loved the most was Robert Rubin, the debonair ex-Goldman Sachs trader Treasury Secretary.

Pictured with Rubin on the Time cover are Greenspan, at a sprightly 72 years old, and Larry Summers, then Deputy US Secretary of the Treasury, just before he ate his wafer-thin mint.

Rubin had, and has, the complete opposite personality of me.

He spoke softly and carried a big stick.

Before I get into what he did to the dollar-yen pair in 1998, see what’s happened to that currency pair lately.

It ain’t a pretty picture for the Japanese. 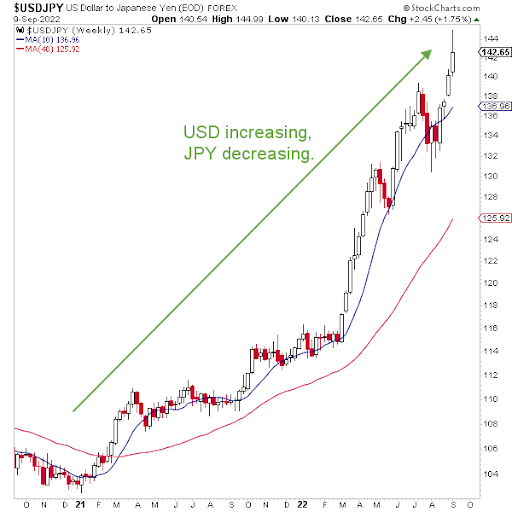 For those of you who aren’t foreign exchange aficionados, let me quickly explain.

The USD is the base currency in this pair.  The JPY is the variable currency.

It’s important to know which is the base currency, so you can speak like FX traders do and not get the pair backward.

On the chart, you can see the pair is going from the bottom left to the top right.  It’s a massively positive trend.

What’s going up is the USD.

And if the USD is going up, the JPY is going down.

Since Joke Biden took the reins in the States, the USD has rallied hard against most other major currencies.

But it’s destroyed the yen.

That’s primarily due to the Bank of Japan being a more feckless central bank than the Fed, Bank of England, or even the European Central Bank.

It’s a ridiculous dislocation in the currency markets, and most are wondering when it will stop.

Back to 1998 and The Reluctant Secretary

By all accounts, Robert Rubin was an immensely successful trader at Goldman Sachs.

He amassed a nine-figure fortune and was an easy choice for Bill Clinton at the Treasury.

As Thomas Sowell once said, “There are no solutions, only trade-offs.”

Rubin embodied that sentiment in an unemotional, intelligent demeanor.

The Japanese yen was getting destroyed. 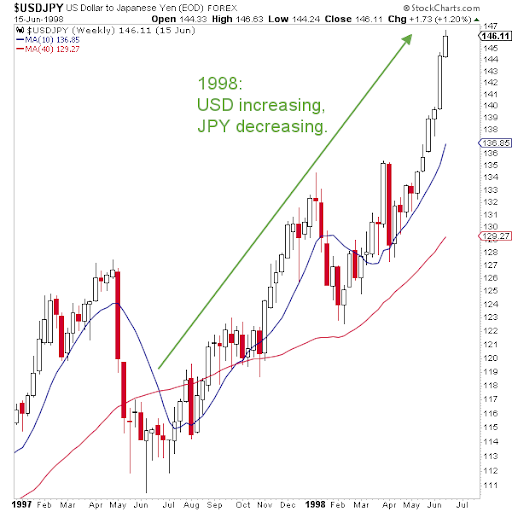 As America had “won” the Cold War and Japan had imploded in 1989, there were no thoughts of burying the Japanese.

In fact, Rubin was looking for a way to help them out.

We welcome Prime Minister Hashimoto's announcement of steps to stimulate the Japanese economy. We look forward to seeing the details later this month. What is crucial is that Japan move quickly to put in place a strong program.

We share the concern expressed by the Japanese Prime Minister about recent weakness in the yen, and in that context, we welcome the action undertaken by the Japanese authorities in the exchange market to support the value of the yen.

And yet, the yen continued its descent against the dollar.

By June, though, the stoic Secretary had had enough.

Rubin was worried that an unsuccessful intervention in the currency markets would hurt American credibility.

But Rubin decided to act after a meeting with Greenspan, Summers, and Assistant Treasury Secretary Timothy Geithner (yup, him, too).

Rubin bought about $2 billion worth of yen, sending USDJPY from 147 to the mid-130s, an enormous move in the currency market. 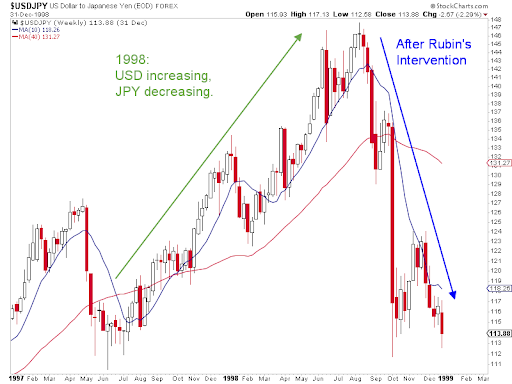 If you were long dollar-yen (that is, short yen), you went from your desk straight past the unemployment line into the poor house.

Rubin’s intervention successfully sent USDJPY back into the 115 area.

Right where the Americans wanted it to be.

If Rubin hadn’t intervened, Japan, China, South Korea, and many other nations might have devalued their currencies.

This move showed American intent on those potential moves.

From The New York Times:

The yen intervention was more than a marker of Japan's humbling. It signified a moment in our own politics in which the defense of prosperity became an overwhelming national preoccupation. With the recovery now in its seventh year, almost everyone in the United States has felt its effects. Our unemployment rate is — incredibly — nearly as low as Japan's. Working wages, stagnant through much of the past decade, appear to be on the rise again. Inflation is a memory, and the long bull market has left the swelling ranks of shareholders feeling flush.

Imagine reading that in the papers today!

Can it happen again?

I think so.  But I’m not sure Janet Yellen has the stomach for it.

Bob Rubin himself didn’t want to intervene.  In the end, he felt he had to.

For those who jump on the long USDJPY trade, caveat emptor.

Or, as the great Harry Flashman would say, “Courage.  And shuffle the cards.”

Finally, Back to Civilizations’ Crossroads

I’ll be on the plane to Istanbul when you read this.