It’s still chilly here in Europe, and I’ve got the sweater on while imbibing my cup of joe.

As soon as I hit “submit” for yesterday’s piece about the sky not falling, I realized I had failed to mention something important.

It was an admission: I was, and am, Chicken Little.

As I was writing, I realized that I was the person I was trying to convince that everything was fine.

But it’s not. Not really.

In one Rude, I wrote economist Yuri Maltsev’s excellent quote, “A pessimist is an optimist with better information.”

I want to be an optimist. I really, really do. It’s my natural disposition.

But the macro numbers are coming thick and fast… and man, they’re uglier than the pictures on Hunter’s laptop.

The latest of them is this month’s Empire Manufacturing Index.

If it were a little down, I wouldn’t have cared much.

But it plunged, like an airplane heading into the ground perpendicularly.

Which usually means the Philly Fed will be a disaster as well. We’ll find out tomorrow morning.

But first, let’s see what happened in New York State.

A Brief Review of the Empire State Manufacturing Index

First, what is it?

It’s a monthly survey of manufacturers in New York state. The Federal Reserve Bank of New York conducts the survey. The bank sends the survey monthly to business leaders representing a wide swath of the manufacturing sector.

The index measures the health of New York manufacturers relative to a year ago and has been strongly correlated with industrial production nationally since it began in 1982.

If 30% of survey respondents marked "increase," 50% chose "no change," and 20% picked "decrease," then the index would show a reading of 10. Index readings are released as absolute numbers to one place after the decimal point.

With that said, let’s see what happened in the January survey.

The Empire State Manufacturing Index Falls Off a Cliff in January

The Empire State Manufacturing Index plunged to -32.9 in January, significantly lower than the -7.0 forecast and December's reading of -11.2. The index is at its lowest level since the Great Financial Crisis of 2008, save the 2020 government-mandated private sector shutdown. 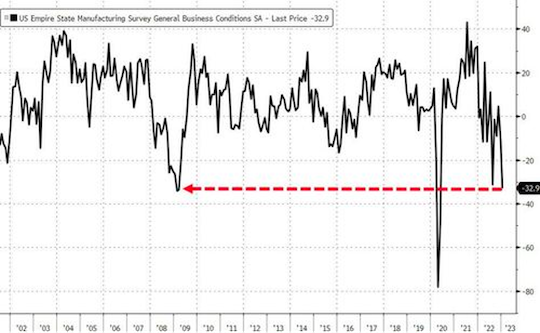 After looking at the overall picture, let’s look at new orders since they’ll determine how many employees we’ll need and what that’ll do to pricing.

New orders have been dropping since September. These are the most important leading indicators of future production.

They're a leading indicator of future employment and sales, too. And they're also a valuable gauge of earnings growth, which is why investors and companies closely watch them.

You’d expect employee numbers to fall, as there aren’t any new orders.

The number of employees fell to 2.8 in January, the lowest reading since the government-mandated private sector shutdown in 2020. This was a sharp drop from December's reading of 14.0.

After this, you’d expect prices also to fall since there’s not much demand.

The prices paid index fell sharply, to 33.0 from 50.5 in December; the prices received index also fell sharply but remains positive at 18.8 in January compared with 25.2 in December.

Here is what some point to as a bright spot in the survey.

Since both prices paid and received dropped, this corroborates the theory that inflation is cooling.

But as my good friend Mark Rossano would say, “It’s like going from 150 mph to 153 mph and thinking you’re slowing down.”

He’s absolutely right. Prices are still going up. But they’re going up at a slower rate than they were before.

So, we’re experiencing disinflation rather than deflation.

The truth is we need prices to fall, not merely slow.

One Bit of Good News

Now we know the current Empire index (blue line) is terrible. But the expected index (red line) is positive. 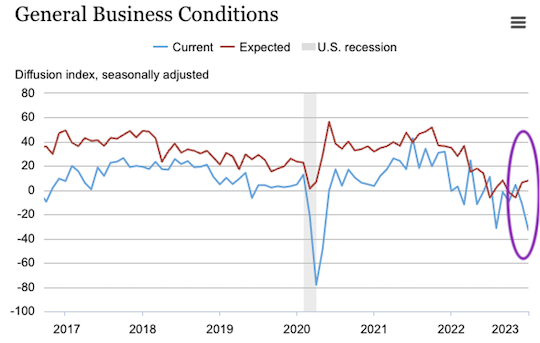 That means six months from now, New York State managers think things will be back in growth mode.

It’s not a certainty but a best guess. And that’s not bad.

In Other Bad News, China…

Those that think China is going to rescue the world economy are misguided.

First, China admitted (finally) that its population has fallen for the first time since 1961.

If demographics is destiny, then this isn’t China’s century.

China's population has fallen for the first time in 60 years, with the national birth rate hitting a record low - 6.77 births per 1,000 people.

China's birth rate has been declining for years, prompting a slew of policies to try to slow the trend.

But seven years after scrapping the one-child policy, it has entered what one official described as an "era of negative population growth."

The birth rate in 2022 was also down from 7.52 in 2021, according to China's National Bureau of Statistics, which released the figures on Tuesday.

The second bit of bad news is that China is experiencing the lowest GDP growth rate in 50 years.

According to the positively gleeful Outlook India, China’s GDP sank to 3% in 2022, its second lowest in 50 Years.

The annual GDP of China totaled 21.02 trillion yuan ($17.94 trillion) in 2022, falling below the 5.5 percent official target, the National Bureau of Statistics (NBS) said.

A declining birth rate and a declining GDP? What new Asian devilry is this?

Between the US economy rolling over and the Chinese not producing anything like kids and output, we’re in a pickle.

Europe won’t rescue us, and I suspect neither will Oceania, Africa, or Latin America.

So buckle up, but keep in mind we may still have a momentum stock market rally here.

In a U-turn, Henry Kissinger now calls for Ukraine to join NATO.