More Running of This Bull…

Top O’ The Morning to Ya!

It’s a bright, sunny Tuesday here in Duterte’s Prison Paradise.  The markets had a nice, green start to the week, so let’s talk about that.

After two of the heavier Rudes I wrote so far, today, we look at pictures.

Let’s See Where the Market Is

No one can predict the market with 100% accuracy all the time.  The first thing you’ve got to do before any sort of prediction can be made is to figure out where you are right now.

I’ve zoomed out on the SPX so you can see what’s happened over the last quarter-century or so.  Have a look at this chart, and then I’ll walk you through it.

The first red circle is the beginning of the aftermath of the Nasdaq bubble burst.  You’ll notice that you literally had years to get out of the market before it hit bottom.  That is, the market trading under its 9-month moving average for a long time before it bottomed out.

The second red circle is just prior to the great financial crisis of 2008.  Notice we were trading under the 9-month moving average for over 6 months before the market sharply tanked.

There are a few other times the SPX fell below the 9-month moving average, but it recovered pretty quickly.  That’s one of the reasons I use this chart as a “sanity check.”

Now, look at the blue box in the top right-hand corner of the chart.  That’s where we are right now.  We’re nowhere near a dangerous area.  Sure, you can argue stocks are slightly overbought here and due for a bigger pullback.  But that doesn’t sound like, “Sell it all!” to me…

The S&P 500 Relative to its Moving Average

Let’s turn our attention quickly to the below chart.

This is the SPX on a daily, rather than monthly, chart.  Essentially, I zoomed in.

Notice that we’re about 10% above our 200-day moving average.  We haven’t even come close to it since we crossed above it after the COVID crash of 2020.

Again, it just doesn’t exhibit bearish characteristics to me at all.

I do understand the macro arguments against the market continuing to rally.  Bull markets climb a wall of worry, as they say.  But this market is technically healthy.

The SPX to M2 Ratio

Let me turn your attention to this interesting chart from Game of Trades, a YouTube channel.  The guys on that channel looked at the SPX versus the M2 money supply.

So this chart is the SPX/Money supply ratio, which isn’t the Buffett ratio.  We’ll look at that shortly.

What jumped out at me about this chart was how, after the Nasdaq crash, the ratio tried a few times, and failed to get above 0.22 (the blue line on the chart).  In fact, the ratio reached just below that level prior to the 2008 Crisis and the Covid Crisis.

If our inflation thesis is correct and it’s going to run a bit, we’ve got a potentially very interesting melt-up play.

To put it plainly, if the Fed continues its money printing policies and the US Treasury continues its expansionary policies thanks to Congress passing Biden’s insane stimulus packages, that money may flow straight into the stock market.  It certainly seems to have over the past 13 years of low rates.

If that happens, and the ratio finally breaks through the 0.22 level, there’s a load of real estate for it to run.  I’m not saying it’ll get to the all-time high of 0.3243.  But there’s no overhead resistance I can see until then.  So the last thing you’d want to be right now is short.

Of course, if we hit 0.22 and get bounced back down, then we’ll need to reassess.

We’ve already talked about margin debt being at an all-time high.  But Advisor Perspectives put together this beautiful chart showing the margin debt (red, left axis) and the SPX (blue, right axis). 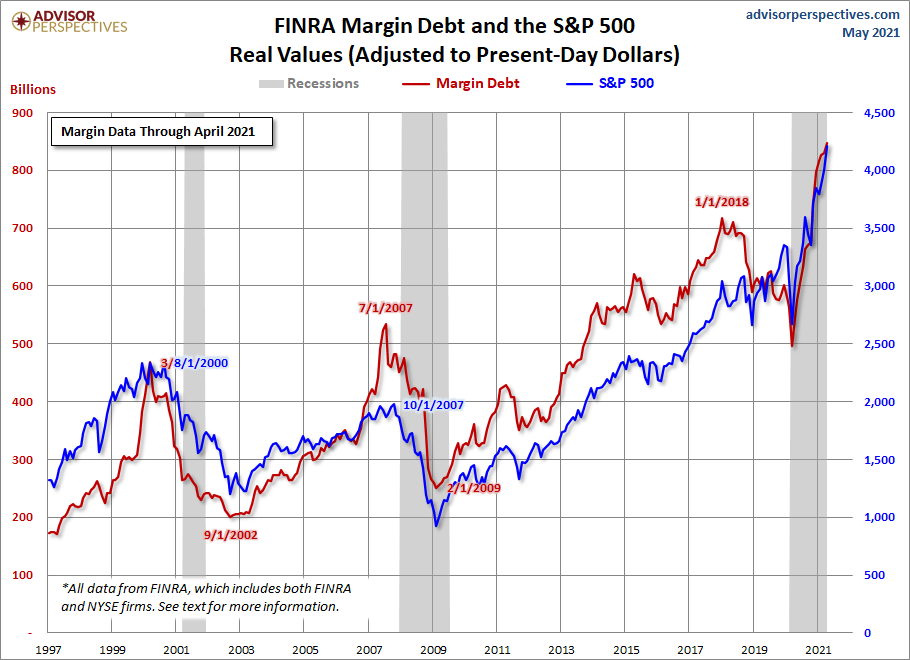 The only issue is that margin debt isn’t a leading indicator.  That is, we won’t see it drop until the market has moved down.  Still, it’s an interesting chart to keep an eye on.

Lastly, I grabbed the Buffett Indicator.  That’s the measure of total stock market capitalization to US GDP. 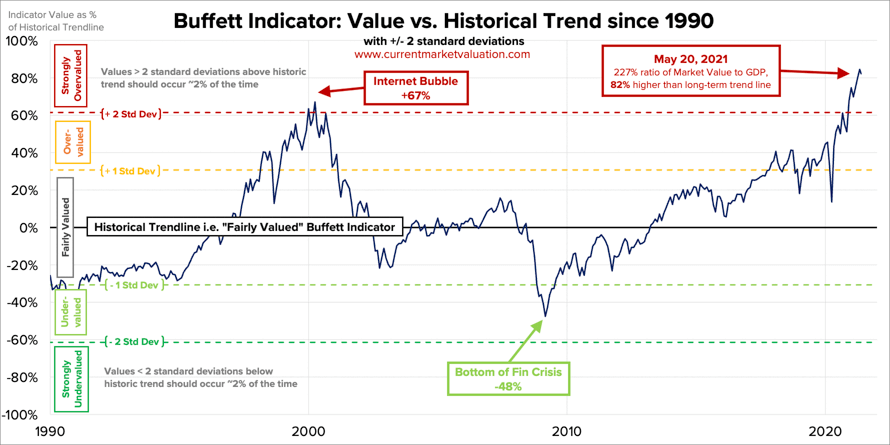 There’s no doubt that by historical standards, this indicator is red hot.  But the problem is that it has no predictive power at all.  Sure, it topped out at the Nasdaq Bubble (the Internet Bubble on this chart) and bottomed out at the 2008 Crisis.  But everywhere else, it’s a lagging indicator.  That is, you don’t see the turns until it’s in your rearview mirror.

Funnily enough, the Buffett Indicator looked roughly fairly valued just prior to the 2008 Crisis.  Perhaps that’s one of the reasons so few analysts saw it coming.

As far as I’m concerned, there’s no reason to short this market at the moment.  I get the long-term macro arguments against this rally.  I genuinely sympathize with those who’ve cried, “This can’t go on!”

I fondly remember an old teaching colleague of mine who is about 25 years older than I am.  Years ago, in the middle of this raging bull market, I said to him, “This simply can’t go on.”

To which he retorted, “I remember saying that when the US national debt was only $4 trillion!”

Have a wonderful day ahead!

Just Say No… To Banning Bitcoin

Happy Hump Day! The weather is weird in this part of the world.  Spring is hotter than summer, so it’s cooling down a bit. My AC is not going to break down...