Good morning on this chilly Tuesday morning in Piedmont.

I just returned from walking Micah to school, wondering when summer will get here.

It cracks me up. For 13 years in Asia, all I wanted was wintry weather. Except for Hong Kong, where there’s a real winter, it’s 90 degrees with 90% humidity every day in Southeast Asia.

And Hong Kong’s winter doesn’t last all that long, as it’s in the south of China on the South China Sea.

It reminds me of the tug-of-war going on right now between the real economy and the stock market.

The real economy - worldwide - is in a heap of trouble. With their CTRL-P monetary policies, Central banks have wreaked havoc on the world’s companies and consumers.

Companies can’t gauge real demand when interest rates are on the floor. And now that rates are moving toward a more historically normal setting, companies grapple with the adjustment of having to pay for their capital.

The great Ludwig von Mises called this “malinvestment.” This happens when entrepreneurs get misleading price signals. And those bad signals lead to a painful correction.

Consumers find themselves with heavier mortgage payments, bigger credit card payments, and lower levels of cash thanks to years of being trained to finance everything and own nothing “free and clear.”

I’ve arrived at the inescapable conclusion that it’s because the stock market is tired of falling.

Yes, Mr. Market, the bipolar misery guts that he is, has decided it’s time to go up.

And so up we go. Probably.

In this edition of the Rude, I’ll show you why the real economy is in trouble, while the market heads higher.

It must be said that based on the Atlanta Fed, it looks like the economy is indeed growing. 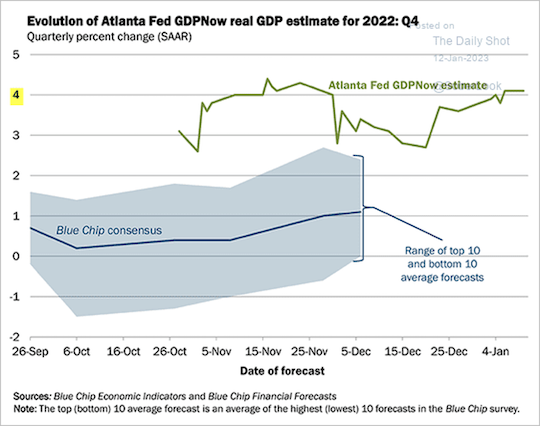 In fact, the economy looks like it’s in rude health right now.

But there are other things to consider.

First, the world economy is not the US economy.

As you can see from the below chart, courtesy of The Daily Shot, world economic policy looks much more uncertain than U.S. policy.

While the Europeans can’t find their bare asses with either hand, the U.S. steams ahead on the motto, “Often wrong, but never in doubt!” 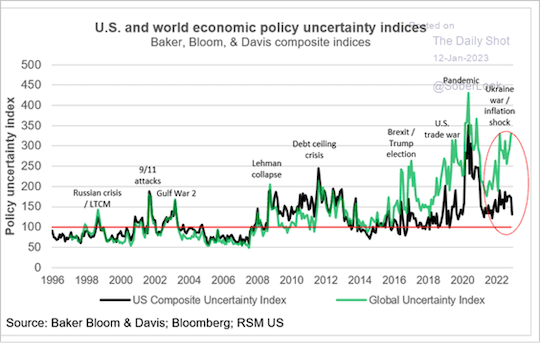 And since Europe is the U.S.’s largest trading partner, this weakness will surely bounce bck on the U.S. It always does.

With that said, the US manufacturing PMI, a great leading indicator, reports only two - two! - industries are showing growth.

I hasten to add that the Fed Manufacturing data has been equally horrific. 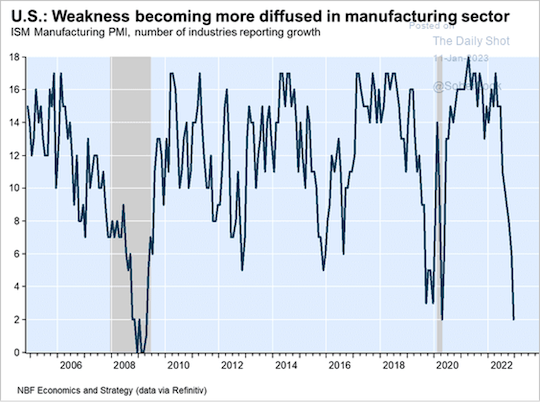 Americans themselves have never borrowed more if you can believe it.

According to the chart below, consumer credit has made a stunning recovery to reach new all-time highs. 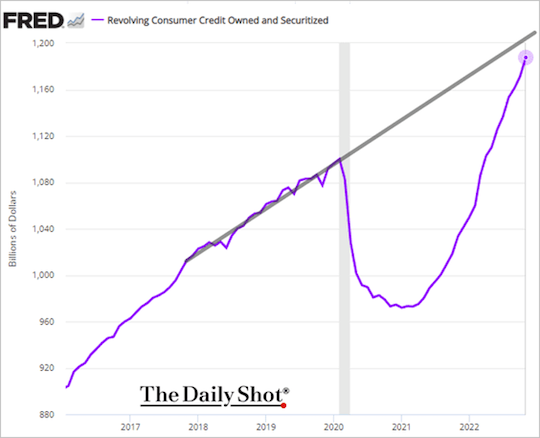 Broken down, Americans either run up their credit cards, sell their assets, or borrow from friends and family to make ends meet.

The numbers are in the Bloomberg chart below: 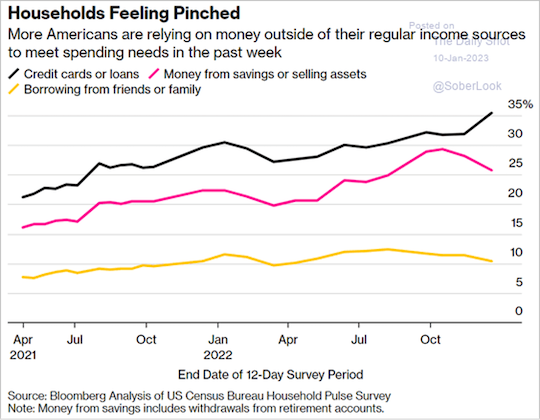 Mortgage costs eat up more disposable income than ever before. MacroAlf just posted the chart below, showing that 45% of household income goes to mortgage payments.

After taxes, it doesn’t look like Americans have much left to spend on discretionary items. 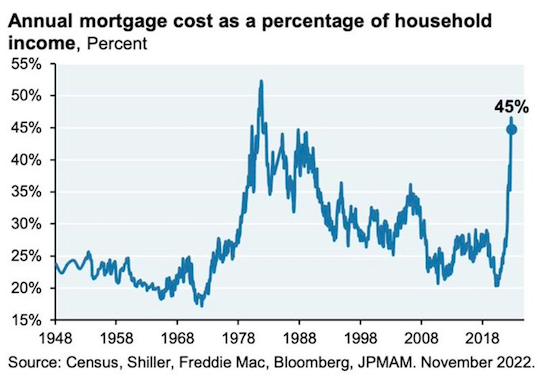 And yet, despite the absolute hollowing out of the middle class, the equity market looks poised for a rally.

Let me show you why.

This next bit comes courtesy of Simon Ree, author of The Tao of Trading. Simon uploaded an informative video about why this time in the SPX may be different.

It’s only six minutes long and worth watching.

I have a hard time arguing with any of his points.

First, here’s a chart I recreated you can refer to: 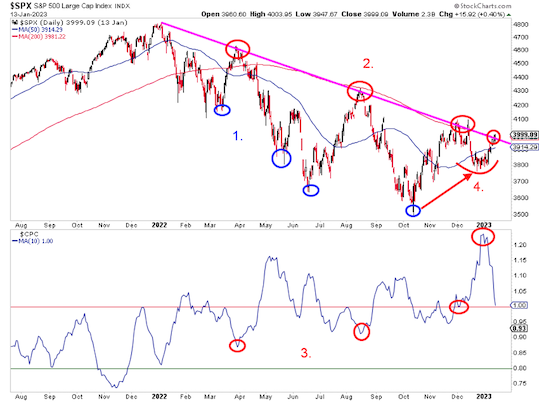 That is the very definition of a downtrend (pink line).

The lower highs (2) bounced off the trendline every time the SPX tried to break out.

The 200-day moving average and the downtrend line correspond well with each other.

You’ll also notice the put-call ratio (3) in the bottom window. That’s the ratio of put volume to call volume in the options market.

From Lawrence J. MacMillan, the author of Options as a Strategic Investment:

Put-call ratios are useful, sentiment-based, indicators. The put-call ratio is simply the volume of all puts that traded on a given day divided by the volume of calls that traded on that day. The ratio can be calculated for an individual stock, index, or futures underlying contract, or can be aggregated – for example, we often refer to the equity-only put-call ratio, which is the sum of all equity put options divided by all equity call options on any given day. Once the ratios are calculated, a moving average is generally used to smooth them out. We prefer the 21-day moving average for that purpose, although it is certainly acceptable to use moving averages of other lengths.

The chart on the right above is a sample one – of IBM. Buy and sell points are marked on the chart. Note that buy signals occur when the ratio is “too high” (i.e., near the top of the chart) and sell signals occur when the ratio is “too low” (near the bottom of the chart). The chart on the left above is that of IBM common stock, with the put-call ratio buy and sell signals marked on it. You can see that, in general, the signals are good ones. In reality, we couple technical analysis – using support and resistance levels – with the signals generated by the put-call ratios. The combining of the two methods normally produces better-timed entry and exit points in our trades.

Like Simon, I’m using the 10-day moving average (instead of MacMillan’s 21-day MA) of the put-call ratio to smooth it out.

You’ll notice that the first three challenges corresponded to a low put-call ratio (3). That is, investors were more bullish than bearish.

As we usually use the put-call ratio as a contrarian indicator, that’s a “sell” signal. And it worked those three times perfectly.

But now, two things have happened on the 4th challenge of the trendline.

First, we have higher lows (4). That is, we didn’t make a new low after the latest sell-off.

Second, the put-call ratio is “too high.” That’s a buy signal, not a sell signal.

So, it looks like we’re heading up on the balance of probabilities.

Was I the last bear in this market?

I doubt it. Sure, we can fall off a cliff from here.

But I have to say, it looks like the SPX heads north for a while, at least.

And maybe that’s a good thing.

But it’s also essential to keep an eye out for a downturn.

A whipsaw in the SPX could cart out many an investor. And for some, it would be for good.

According to the NY Fed’s district, the economy isn’t weak. It’s in dire straits.