Happy Monday to you from a brisk, crisp Asti.

It was a tame weekend for me, though the Barbera and Grignolino were delicious.

As usual, I read the newspapers to see what they were peddling as the new current thing.

Right now, it seems the press doesn’t want to admit this market has broken down.

There’s almost no good news on the horizon.

We may get a bounce here, but there are no real “buy signals” out there.

But as the market is “only” down 19%, the papers refuse to declare a bear market.

This time, the media is just awaiting confirmation, I suppose.

But a bear market is already here - or inevitable - depending on your preferred outlook.

In this edition of the Rude, I’ll show you some pretty damning numbers and why now isn’t the time for optimism.

I usually do either daily or monthly charts, but it’s also good to look at the weekly.

In the 1950s, the average stock holding time was eight years, so looking long-term made much sense.

Let’s see what they tell us. 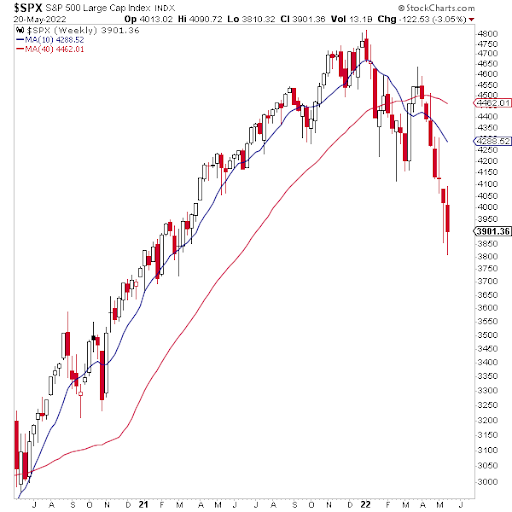 The SPX is not looking good at all.

After March’s sucker’s rally, it’s been down seven straight weeks. 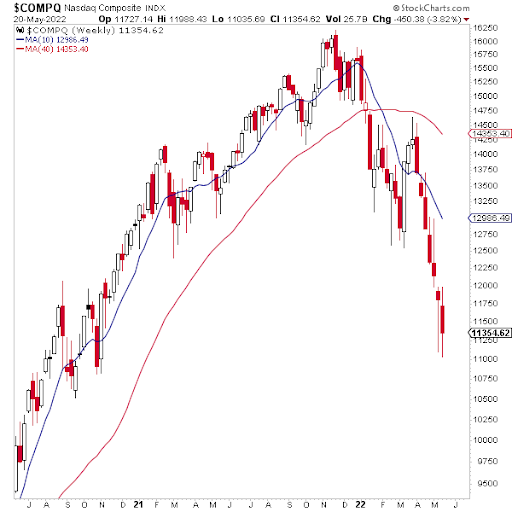 The Nasdaq looks even worse, as the drop is steeper and its leading stocks are getting hammered.

Many market watchers are drawing comparisons between the Nifty 50 stocks of the 1970s and the FAANGs of today.

By the way, in modern finance, the Nifty 50 is one of India’s stock market indexes.  I’m not talking about that one.

Have you never heard of the US version of Nifty 50?  There’s a reason for that.

The Nifty Fifty was a group of 50 stocks identified by market commentators, although it was never an official benchmark index.

Delivering healthy profits and good returns for investors year after year, they came to trade on very high valuations.

Many are still household names today, although some, like Eastman-Kodak, have disappeared.

It was said by many investors at the time that Nifty Fifty stocks should be bought and never sold.

By the early 1970s, they had become the darlings of many institutional investors and staples of their portfolios.

The Nifty 50, too, had insane valuations for their time.

Then, one by one, investors sold those stocks until the Nifty 50 was no more.

History may not repeat, but it sure looks like it’s rhyming right now. 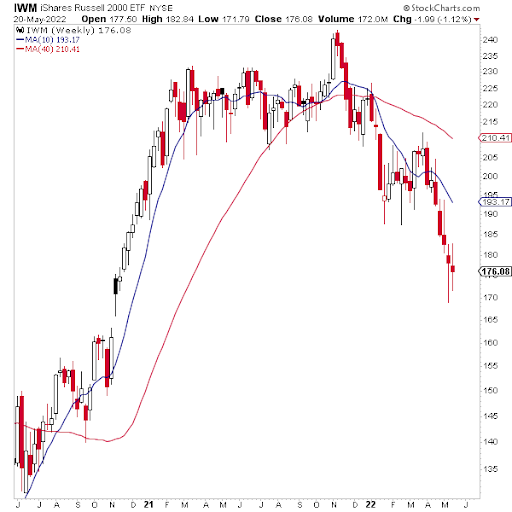 To their great credit, smaller businesses have held up the best they could.

But the relentless pressure from lousy government and central bank policies have made it damn near impossible to run a small business.

Inflation, supply chain, and fuel issues have all contributed to the Russell’s decline.

It’s no different from the bigger stocks, really.

But smaller businesses can’t afford to buy as many politicians as the big ones can.

I love reading JC Parets’ stuff over at allstarcharts.com.

This is a choice pick from his latest email:

The average stock listed on the NYSE is down over 34% off its highs.

The New 52-week highs list peaked in February of last year - that was over 15 months ago!

The Technology, Communications, and Consumer Discretionary sectors combined make up almost half of the stocks in the entire S&P500. They're each now down 26%, 33%, and 35%, respectively.

In fact, almost half the stocks on the Nasdaq have seen their prices get cut in half.

JC isn’t buying the “not a bear market” thesis at all.

And though JC is a pure chartist, he added that the lower USD and the bounce in bonds are good for the market.

So there may be a glimmer of hope.  But it’s just a glimmer for now.

A quick reminder: the Philly Fed is a leading economic indicator, which gives us an idea of what direction the region, and by extension, the country, is going.

The Philly Fed, technically called The Manufacturing Business Outlook Survey, is a monthly survey of manufacturers in the Third Federal Reserve District.

The Third Federal Reserve District covers the state of Delaware, nine counties in southern New Jersey, and 48 counties in the eastern two-thirds of Pennsylvania. 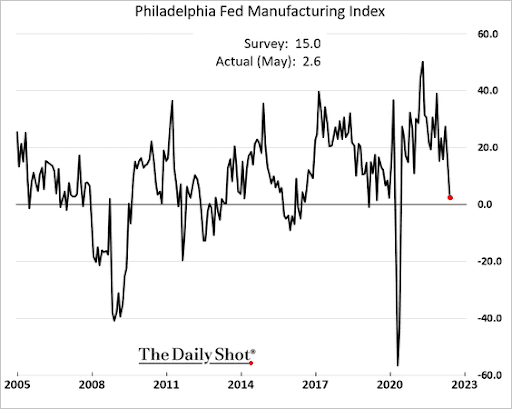 We’re still in expansion territory, but only just.

The outlook isn’t so great, though: 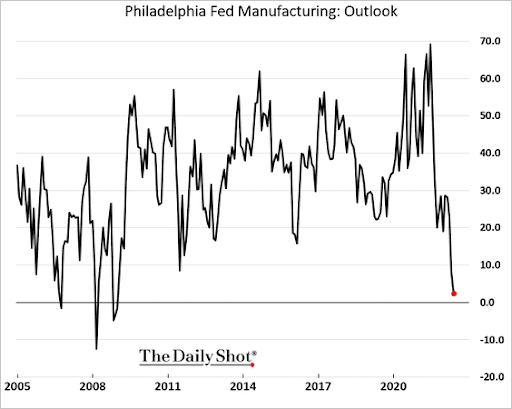 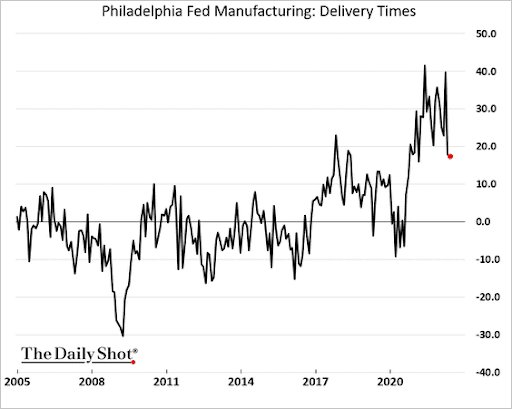 And delivery times are still elevated, though off their prior peaks.

Prices paid, an indicator everyone is watching right now, eased off slightly but is still very high. 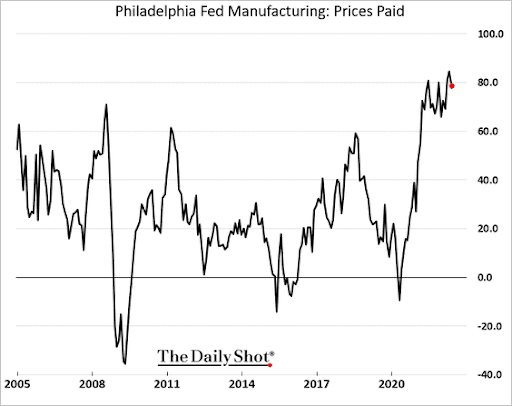 It seems like inflation, supply chain bottlenecks, and softening demand are the big stories here.

This week, two things concern me: the Biden administration’s sheer denial of the outcomes of its stupid policies and the bots.

First, Joke Biden and his crew continue to allow the domestic economy to deteriorate as they rattle the saber at China.

His central bank will continue to ratchet up rates too quickly until the economy breaks down.  At what speed that is, I don’t know for sure.  But I’d bet it’s under 3%.

Secondly, the bots see no real buy signal to latch onto.

As I look at all the US indexes, none look like they’re ready to recover.

Jeremy Grantham says this stock market reminds him of 2000, when the tech stocks took their sweet time crashing.

I agree with that, as the macroeconomic environment has worsened quickly.

That, coupled with the Fed incessantly raising interest rates, will cause a disaster.

But that’s where we are for now.