It Ain’t Over ‘Til The Plutocrat Goes Splat

Man, it’s brisk here in Northern Italy.  It’s more akin to a November morning than a late May one.

I had to break out my fleece for my morning constitutional!

And speaking of cold, the headline of this piece may seem a bit, well, “aggressive” even for this newsletter.

So let me dispel something.

In 1929, brokers and investors didn’t jump out of windows in droves.

It was a lie that became a part of the American mythos.

John Kenneth Galbraith wrote about this very thing in his book, The Great Crash, 1929:

In the United States, the suicide wave that followed the stock market crash is also part of the legend of 1929.

In fact, there were none.

For several years before 1929, the suicide rate had been gradually rising.

The statistics for New Yorkers, who might be assumed to have had a special propensity for self-destruction derived from their special propinquity to the market, show only a slight deviation from those of the country as a whole.

And why am I using the term “plutocrat”?

Well, “oligarch” has been reserved for Russians.

So we’ll go with plutocrat, a synonym without the nationalistic flavor.

They, too, derive their power from their wealth.

The Fed will not have done its job of quelling inflation and the accompanying malinvestment until we have some plutocratic bankruptcies.

That is, we need to get the plutocrats to feel financial pain.

When that finally happens, the Fed can take pride in a job well done!

(Albeit, it’ll be far too late on a reckless expansionary policy it only has itself to blame).

The Here and Now

The risk now is that the Fed eases up on its hiking policy.

But I’m not sure the markets believe him anymore.

I won’t inundate you with charts in this Rude.

Our monthly asset class report is due tomorrow.

That means the market doesn’t think the Fed’s hikes will extend that far.

The always level-headed JC Parets of All Star Charts wrote this morning:

For these reasons, he’s bullish on the SPX.

In my report tomorrow, I’ll show he’s probably right in the short term.

And that’s what scares me…

We haven’t had enough pain yet in the upper echelon of society.

But the pain they need isn’t higher taxation…

It’s a loss of paper wealth.

Why Higher Taxes on the Rich Aren’t the Answer, Warren…

I can’t stand Warren Buffett when he talks about taxes.

He sounds like a radio advertisement for the IRS.

Gee, Warren, if your secretary pays a higher tax rate than you, spring for a better accountant.

Begging for higher taxes on the plutocrats isn’t the answer.

Because plutocrats like Buffett have armies of accountants to reduce their tax bills legally.

From The Wall Street Journal:

For borrowers, the calculation is clear: If an asset appreciates faster than the interest rate on the loan, they come out ahead.

And under current law, investors and their heirs don’t pay income taxes unless their shares are sold.

The assets may be subject to estate taxes, but heirs pay capital-gains taxes only when they sell and only on gains since the prior owner’s death.

This is why the correct answer to this puzzle is falling asset prices.

Unless and until the Fed goes through with its hiking cycle - and I mean getting interest rates back to normal - our economic issues won’t go away.

And by economic issues, I mean ludicrous inflation and meandering growth.

As seen on LinkedIn today: 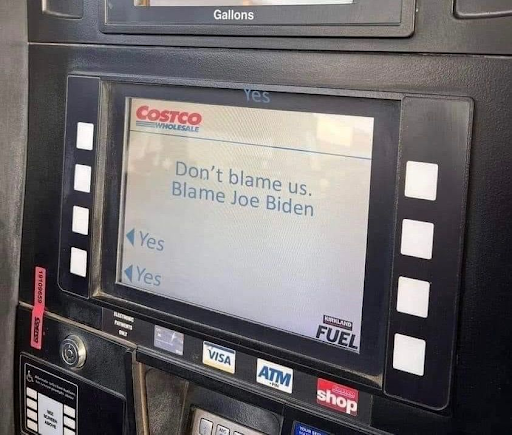 When food and energy rocket for a long enough time, you see civil unrest.

We’re already seeing that in many parts of the world.

The economic pain for the rich will be enormous.

But that’s the price the Fed (and the rest of the world’s central banks) must pay to quell the coming insurrection.

The last thing we need is higher taxation.

With that said, if the Fed continues to hike to a neutral level (currently pegged at 2.5%), I don’t think that will be enough.

The Fed has to exceed 2.5% to bring asset prices down to a level where the rich must repay their margin loans.

Yes, that will have a cascading effect on asset prices.

But that’s the medicine we need to clear up all the economy’s malinvestments.

Tomorrow, I’ll back up this little Rude with charts for our monthly asset class report.

I like the value over growth story if you must be in stocks right now. But I like high dividends on value stocks, best of all. High-flying tech stocks are not the...