This is a long Rude, but completely worth your while.

The great libertarian writer, Doug French, gave an excellent speech on how movements turn into rackets.

Doug has taken three organizations and shown that this phenomenon happens no matter where you are on the political spectrum.

He looks at the SPLC from the left, Hillsdale College from the right, and FEE from the libertarian. 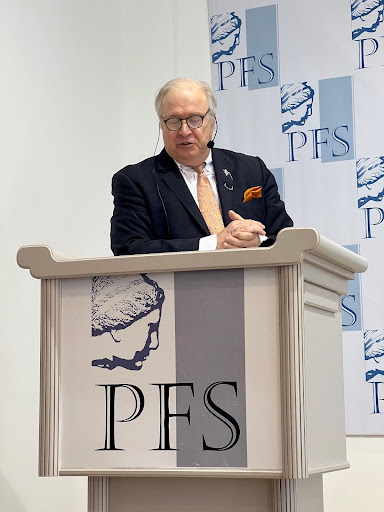 "We just run our business like a business," Dees told John Egerton. "Whether you're selling cakes or causes, it's all the same."

While studying law at the University of Alabama in the late nineteen-fifties, ''Dees sold holly wreaths and birthday cakes, published a student telephone directory, dabbled in real estate," Egerton wrote.

Upon graduating, in 1960, Dees teamed up with another ambitious student, Millard Fuller, who'd go on to found Habitat for Humanity.

They opened a direct-mail business in Montgomery, selling doormats, tractor-seat cushions, and cookbooks. "Morris and I, from the first day of our partnership, shared the overriding purpose of making a pile of money,"

In 1971, Dees opened the Southern Poverty Law Center. He was already a colorful and controversial figure in Alabama. He volunteered to raise money for George McGovern's Presidential campaign and, with McGovern's blessing, used its donor list of seven hundred thousand people to help launch the S.P.L.C. 's direct-mail operations.

The center began to abandon poverty law to raise money off Klan-fighting from liberals up north.

The center had accumulated an endowment topping a hundred and twenty million dollars while paying lavish salaries to its highest-ranking staffers and spending far less than most nonprofit groups on the work it claimed to do.

S.P.L.C. colleagues used to tell jokes to keep themselves sane. In Montgomery, walking to lunch past the center's Maya Lin-designed memorial to civil-rights martyrs, they'd cast a glance at the inscription from Martin Luther King, Jr., etched into the black marble, "Until justice rolls down like waters," and intone, in their deepest voices, "Until justice rolls down like dollars."

The Law Center had a way of turning idealists into cynics.

Like most liberals, their view of the S.P.L.C. before they arrived had been shaped by its oft-cited listings of U.S. hate groups, its reputation for winning cases against the Ku Klux Klan and Aryan Nations, and its stream of direct-mail pleas for money to keep the good work going.

The mailers, in particular, painted a vivid picture of a scrappy band of intrepid attorneys and hate-group monitors, working under the constant threat of death to fight hatred and injustice in the deepest heart of Dixie.

"Well, honey, welcome to the Poverty Palace," a veteran staffer told Bob Moser. "I can guaran-damn-tee that you will never step foot in a more contradictory place as long as you live."

Moser wrote in the New Yorker (after working at SPLC), "The work could be meaningful and gratifying. But it was hard, for many of us, not to feel like we'd become pawns in what was, in many respects, a highly profitable scam."

It was profitable before 2015.  But after Donald and Melania came gliding down that escalator in 2015, his presidency opened up a gusher of donations

That’s more than the total assets of the American Civil Liberties Union.

In 2019 employed an all-time high of around three hundred and fifty staffers.

But none of that has slackened its constant drive for more money.

"If you’re outraged about the path President Trump is taking, I urge you to join us in the fight against the mainstreaming of hate," a direct-mail appeal signed by Dees in 2018 read.

Dee's staff womanizing got him canned.

But the work goes on…

The annual hate-group list, which in 2018 included a thousand and twenty organizations, both small and large, remains a valuable resource for journalists and a masterstroke of Dees's marketing talents; every year, when the center publishes it, mainstream outlets write about the "rising tide of hate" discovered by the S.P.L.C. 's researchers.

And the money rolls in….

From the Right: Hillsdale College

A former senior-level employee of Hillsdale College called George Roche Ill "one of the great fund-raisers in the history of political ideologies."

Roche raised millions to build modern facilities and provide ample student aid to any of Hillsdale's 1,200 students who needed it. If Roche seldom made rounds on campus, it was understood: He was out raising money to beat back the liberal devils lurking outside Hillsdale's gates.

Very charismatic and considered a "conservative celebrity" and "a hero to the movement," William F. Buckley called Hillsdale" the most prominent conservative college in the country."

“This man,” said one Hillsdale professor, “is a phony and a fraud.”

A Roche family member explains, “He’s not really the type of person that everybody thinks he is.  He’s kind of like a Jekyll and Hyde.”

Roche had a reputation for possessing a free-range phallus rumored to have visited students and college employees.

A senior-level employee who marveled at Roche’s fundraising skills claims to have fled Hillsdale when he suspected Roche was putting the moves on his wife.

Roche was considered downright ruthless by those unfortunate enough to cross him.

Lissa, the wife of George IV (also a Hillsdale professor), was very disturbed by the presence of a new woman in her father-in-law’s life.

Roche was hospitalized with complications from diabetes, and his distraught daughter-in-law Lissa threatened to kill herself in a phone conversation with him.

The older Mr. Roche’s secretary interrupted a class taught by his son, and the son rushed to Lissa.

“Is she telling the truth or having some sort of breakdown?” the son asked his father.

The younger Mr. Roche said his father “didn’t say a word.  I could tell by looking at him that she was telling the truth.  I saw the look in his eyes.  He was caught.”

After the confession, Lissa returned to her campus house and armed herself with a 38-caliber handgun. She walked out of her backyard and through the college's arboretum to a stone gazebo and ended her life.

In other words, Roch could do whatever he wanted as long as he didn't embarrass the school.

His daughter-in-law’s revelations of their affair and her suicide were too much for the trustees.

Roche had hauled in nearly $325 million by the time he resigned.  That increased Hillsdale’s endowment from $4 million to $184 million.

“Students and their parents were particularly worried that the scandal might cause donations to drop, crimping Hillsdale’s future.”

Roche resigned after his lover’s suicide, and a member of the Roche family puts the figure of his golden parachute at $3 million.

These days, Hillsdale is making news by cozying up to Florida governor Ron DeSantis.  The Christian school has been described as a “citadel of American conservatism.”

Donald Trump has connections there.  Ted Cruz and Clarence Thomas have been commencement speakers.

The school has started a series of “leadership seminars” that sound like right-wing TED talks.

Hillsdale is also a champion of what it calls “patriotic education.”

From the Libertarian: Foundation for Economic Education

FEE founder Leonard Read. While handsome and charismatic, Read was, in Rothbard's words, "Hardly appreciative of scholarship or the conditions of free inquiry and research, Read stifled the scholarly and creative productivity of everyone on his staff ... "

Instead, the FEE founder "increasingly pitched [FEE publications] toward housewives, rather than scholars, which immediately tossed away the importance of the 'pyramid of influence' from intellectual to mass."

Mr. Read, while remembered as a giant in libertarian history, is also known for his prurient interest in housewives. Brian Doherty wrote in "Radicals For Capitalism" that Read's sexual exploits were allegedly on par with Wilt Chamberlain's (who reportedly bedded 10,000 different women).

Murray was more delicate, telling Harper and Resch, "purer libertarian thought was not only discouraged by Read but bitterly attacked." Read just wanted to offer his own way of understanding the freedom philosophy, in a manner more preacher than teacher," Doherty wrote. That approach attracted businessmen supporters, who proselytized to their employees.

What Read did best was raise money while catering to what Rothbard called the "high school" of liberty.

Murray wrote to harper and Resch:

It is the thesis of this memorandum that the problem of tactics and strategy for the advancement of the libertarian-individualist cause is at a critical crossroads, a crossroads in the historical development of this stream of thought, transcending even the important problems of establishing a possible libertarian institute, or of deciding how to rechannel educational funds from various blind alleys into which they have fallen.

The FEE literature, in sticking to generalities -and low-grade generalities at that -fell between two stools and has therefore lost influence both among the intellectuals and among the "mass base."

Rothbard, in his mid-thirties, was more than concerned with such thinking. In the Harper Resch memo, he wrote, "the danger is Jess apparent and more insidious. For it is the danger of the hardcore libertarian being swamped by a growing mass of  'conservative' and right-wing thinkers."

Read, "rationalized the processes one of 'training' libertarians and then sending them off to better things, thus functioning as a 'high school1 of liberty." "He thus ignores the fact that it could have been a lot more."

Rothbard addresses the influence of the Right:

From FEE's launch in March 1946 until the early 1980s, Leonard Read gathered over $1 million a year in donations from some of America's biggest businessmen.

Rothbard finished the section of the memo entitled '"'The decline of FEE" with this:

Another danger that the history of FEE and other right-wing organizations tells us: the tendency for the fellow who can obtain money to be in control of policy, and the corollary tendency to begin to trim the output of the organization to what will attract the money. When the latter happens, the gathering of money begins to become the end, not the means, and the organization begins to take on the dimension of a "racket.”

Many thanks to Doug for his kind permission to reprint his speech.

And many thanks to you for reading!