Here Are My 16 Cents Worth…

I hope you enjoyed a fun and restful weekend.  Now back to the salt mine!

Uncle Joe posted a whopper on the White House Twitter account.  I’m starting to believe those who think the elites are intentionally trying to humiliate us into submission. 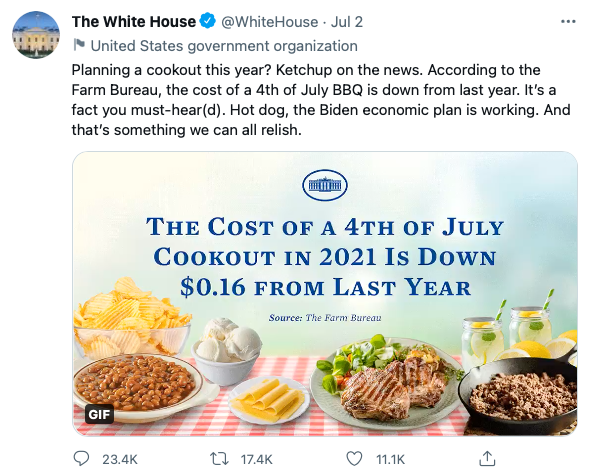 Ronnie, an American friend of mine, wrote on Facebook, “But it'll cost ya an extra 10 bucks in gas to get to that bbq.”

Another friend Lawrence asked, “How much can you buy with 16 cents?”

Old buddy Joe chimed in with, “I’m old enough to remember Nancy Pelosi saying that $2,000 bonus checks being written by corporations to employees were ‘crumbs.’”

Good friend Aaron wrote, “Please tell me this is satire.”

After I assured him it was not, he asked, “Is this a real tweet?”

I posted the hyperlink to the tweet and Aaron wrote, “The White House is officially an idiot.”

Or a bunch of idiots, I’d argue. 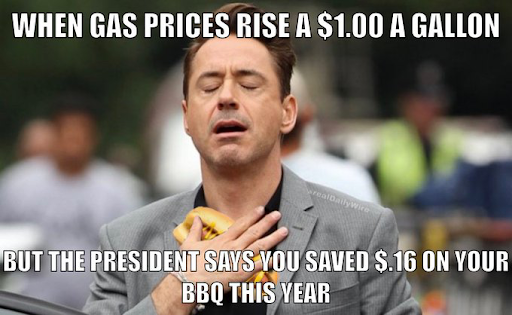 I’ve had the privilege to meet Tony Daniels - Theodore Dalrymple is his pen name - on a few occasions.  Tony is one of the loveliest guys you could ever meet.  The speeches I’ve heard him give are among the most intelligent, funniest, and least pretentious I’ve ever listened to.

Although Tony is English, he seems to have avoided the usual bowing and scraping to authority most Englishmen self-inflict.  Tony still writes for Taki’s Magazine, and I highly encourage you to gorge yourself on his writing.

What Tony writes and says sticks with you.  Perhaps it’s his cogent writing style or his ability to inject humor into hopelessness or his prescient advisories.

To wit, something he said in an interview with FrontPage magazine many years ago stuck with me.  Now I believe he not only hit the nail on the head, but he saw this coming years before anyone else did:

Political correctness is communist propaganda writ small. In my study of communist societies, I came to the conclusion that the purpose of communist propaganda was not to persuade or convince, nor to inform, but to humiliate; and therefore, the less it corresponded to reality the better. When people are forced to remain silent when they are being told the most obvious lies, or even worse when they are forced to repeat the lies themselves, they lose once and for all their sense of probity. To assent to obvious lies is to cooperate with evil, and in some small way to become evil oneself. One's standing to resist anything is thus eroded, and even destroyed. A society of emasculated liars is easy to control. I think if you examine political correctness, it has the same effect and is intended to.

“A society of emasculated liars is easier to control.”  God, that’s profound.

The Psychology of Humiliation

Brene Brown, an American professor and author, wrote a few books on the subjects of guilt, shame, embarrassment, and humiliation.  Just delineating and defining those terms provides a sense of relief and orientation.

I’ll briefly do that now, thanks to Brown’s illuminating book, Daring Greatly:

Guilt: “I did something bad.”

Humiliation: “I don’t deserve this treatment I’m getting for the thing I did/did not do.”

Embarrassment: “I feel silly about this thing, but it happens to everyone and it’s kind of funny.”

Let’s get rid of the extremes.

Nothing good ever comes of shame.  Ever.  There are no positive outcomes with shame.

On the other hand, embarrassment is the least harmful of these emotions.  You’ll have a laugh about them one day.

Like the time I farted in the middle of my classroom.

But my colleagues and I crack up over it whenever we’re having drinks and talking about the old days.  A blush and it’s gone.

That leaves guilt and humiliation.

Guilt is just as strong as shame, but it usually brings about a positive outcome.  Whenever we say “sorry,” change our behavior, or rectify an error, that’s guilt positively working for us.  And then the guilt is gone.

Unlike shame, which lingers and leads to all sorts of negative behaviors, guilt goes when you fix the situation.

And then there’s humiliation.

This is where self talk comes into play.

Let’s say a husband casually cheats on his wife.

If his wife says to herself, “I don’t deserve the way this bastard is treating me.”  This is humiliation.

Why is humiliation such a great tool for the Left and other assorted losers?

Humiliation is an abasement of pride.  It’s a tool for knocking people down.

Jonathan Sacks wrote this in The New York Times in 2015, referring to the rise of anti-semitism:

Hate cultivated for such cultural and political ends resolves the dissonance between past glory and current ignominy. By turning the question “What did we do wrong?” into “Who did this to us?”, it restores some measure of self-respect and provides a course of action. In psychiatry, the clinical terms for this process are splitting and projection; it allows people to define themselves as victims.

Humiliation breaks momentum.  It gives pause.  It makes us second guess ourselves… constantly.  And it’s been a disaster for America.

But I think the Left has finally started to overplay its hand.

The responses to the White House’s tweet were a combination of righteous indignation, shocked incredulity, and sheer head-smacking.  Both from the Left and the Right.

But the key to humiliation working is that the population getting humiliated has to stay quiet.   Quietly question themselves and never question their accusers.

And that’s why it’s so important to call out this ludicrousness.  Because if we’re not questioning the narrative, we’re walking into a trap.

Let’s turn to the fictional V of V for Vendetta:

Well certainly there are those who are more responsible than others, and they will be held accountable. But again, truth be told…if you’re looking for the guilty, you need only look into a mirror.

I know why you did it. I know you were afraid. Who wouldn’t be? War. Terror. Disease. There were a myriad of problems which conspired to corrupt your reason and rob you of your common sense. Fear got the best of you and in your panic, you turned to the now High Chancellor Adam Sutler. He promised you order. He promised you peace. And all he demanded in return was your silent, obedient consent.

Just replace High Chancellor Adam Sutler with President of the United States Joseph R. Biden and you get the picture.

Funnily enough, the students who voted for their debt to be cancelled, the women who thought all evil would leave government once Trump was out, and those who thought the borders would open right up - in other words, Biden voters - are suffering the most.

None of those outcomes happened.  All Biden promises to these constituents have been rolled back or outright cancelled.

They must be embarrassed.  But that’s not what the higher-ups are going for.

It’s critical to keep your chin up, your reason working, and your common sense on high alert.  There’s a lot of stupid going around, and it’s far more infectious than covid.

Have a great day back at work.

P.S. For those of you with Italian ancestry: If you go through my friend Martina’s firm, https://italiancitizenshipassistance.com, all Rude readers are now entitled to a 5% discount.

I know that doesn’t sound like much, but believe me, getting any discount for a specialized service is a blessing.  (Have you ever seen a Rolex on sale?  Me, neither!)

If you’ve already engaged them, make sure you mention this.  And if you haven’t, go there now to claim your discount!

Happy Hump Day!Exactly one month ago, I wrote about the evil of a global minimum corporate tax rate. Its time for an update, as the proposal now faces some serious...