My goodness, I need to stop partying in the Big Apple.

Besides dealing with the rats, it’s probably not optimum for my liver.

Two nights ago, we went to Fraunce’s Tavern.

That’s the ancient pub below Wall Street where Washington gave his farewell speech.

A week after British troops had evacuated New York on November 25, 1783, the tavern hosted an elaborate "turtle feast" dinner on December 4, 1783, in the building's Long Room for U.S. Gen. George Washington during which he bade farewell to his officers of the Continental Army by saying "[w]ith a heart full of love and gratitude, I now take leave of you. I most devoutly wish that your latter days may be as prosperous and happy as your former ones have been glorious and honorable." After his farewell, he took each one of his officers by the hand for a personal word.

I’m sure the night was amazing, but it wasn’t the same as the one where he and others celebrated the Constitution’s signing.

That’s the foundation of this true meme: 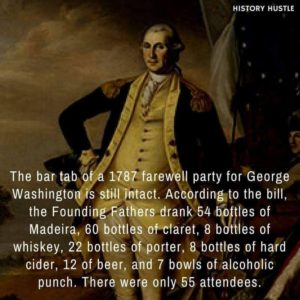 As interesting - and as worthy of emulation - as all that is, we’ve got bigger fish to fry.

The Fed hiked another 75 bps to an upper bound of 2.50%.  And the market thinks the Fed may be done. 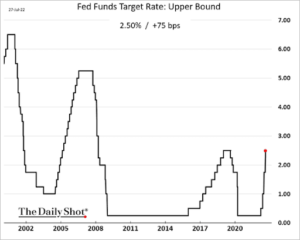 The Fed’s statement included the following:

The Committee seeks to achieve maximum employment and inflation at the rate of 2 percent over the longer run. In support of these goals, the Committee decided to raise the target range for the federal funds rate to 2-1/4 to 2-1/2 percent and anticipates that ongoing increases in the target range will be appropriate. In addition, the Committee will continue reducing its holdings of Treasury securities and agency debt and agency mortgage-backed securities, as described in the Plans for Reducing the Size of the Federal Reserve's Balance Sheet that were issued in May. The Committee is strongly committed to returning inflation to its 2 percent objective.

According to the WSJ:

Given Mr. Powell’s insistence that the Fed has to cause slower growth and accept rising recession risks to bring down inflation, “it is a bit surprising that all assets reacted in such an exuberant manner,” said Michael de Pass, global head of linear rates trading at Citadel Securities.

True enough.  After the hike, the market rallied hard.

Here’s a chart of the SPX: 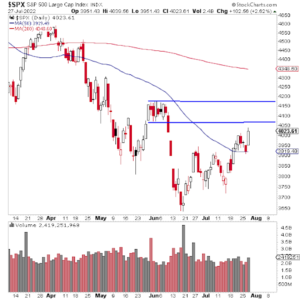 Sure the SPX is above its 50-day moving average.  But that’s been the case for a while now.

Until then, I just can’t get excited about this rally.

Again, from the Journal:

“These rate hikes have been large, and they’ve come quickly,” Mr. Powell said, referring to the Fed’s four consecutive rate increases since March. “And it’s likely that their full effect has not been felt by the economy, so there’s probably some significant additional tightening in the pipeline.”

The market saw this as a dovish move.

Honestly, it looks like the market was trying to talk itself into a rally.

Above is the famous Fed “dot plot.”

The Fed’s dot plot is a chart that records each Fed official’s projection for the central bank’s key short-term interest rate. The dots reflect what each U.S. central banker thinks will be the appropriate midpoint of the fed funds rate at the end of each calendar year three years into the future, should the economy evolve as they expect. Officials also provide a dot for the longer run, which represents the so-called “neutral rate of interest,” or the point where rates are neither stimulating nor restricting economic growth.

The median of those projections is the magenta line above.

Over that, the Fed Funds futures rate is the black “market” line.

According to the CME:

30-Day Fed Funds futures and options are one of the most widely used tools for hedging short-term interest rate risk. Fed Fund futures are a direct reflection of collective marketplace insight regarding the future course of the Federal Reserve’s monetary policy.

The price of the Fed Funds future is:

So backing out what the market thinks the Fed funds rate will be is an easy calculation.

Using the chart above, the market seems to be massively underpricing what the Fed will do over the next few months, at least.

To put a fine point on it, the market thinks the Fed will be done raising rates by the end of this year. 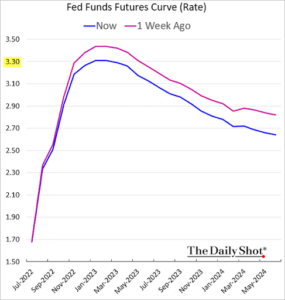 Yes, the market thinks Powell will chicken out and not do a “Volcker.”

Heaven help us if that’s true.

We’d never get the seemingly entrenched inflation out of the system.

Right now, it’s “steady as she goes” with respect to rate hikes.

But it looks to me like the market is seeing what it wants to see, regardless of what Powell says.

This can lead us to a whipsaw in the coming days when the market realizes Powell and crew may not be done yet.

How the market reacts today may tell us a great deal.

If we continue the rally, the market may be right.

But if the rally fizzles, there will be much head-scratching and contemplation.