I’m going to have some Margherita pizza to celebrate.

The tomato is red, the cheese is white, and the basil leaf is green.

Those colors represent the Italian flag.

I don’t mean to fiddle while the world burns, but there’s not much else I can do.

He says the US consumer has $2 trillion in stimmy still in its pockets.

But that money will run out in six to nine months.

After that, we’re doomed, according to Dimon.

None of that would surprise any Rude reader.

I’ve been bearish on these pages for the past six months.

But what is surprising is that the CEO of America’s most respected financial institution said this aloud.

At an investor conference, where people could hear him loud and clear.

What Exactly Did Dimon Say?

Dimon, speaking at a financial conference sponsored by AllianceBernstein, said, “It’s a hurricane. Right now, it’s kind of sunny, things are doing fine, everyone thinks the Fed can handle this,” according to Bloomberg.

However, “That hurricane is right out there, down the road, coming our way,” he added. “We just don’t know if it’s a minor one or Superstorm Sandy or Andrew or something like that. You better brace yourself.”

Though Dimon loves the spotlight like a teen movie star, I don’t think he said this necessarily to attract headlines.

There are some convincing reasons for Dimon sounding the alarm.

So Why Did He Say It?

Let’s parse out what’s going on.

US Personal Savings is Down…

This morning, I took a screenshot of the US personal savings rate:

You can see people saved truckloads during the pandemic.

Despite that, spending is up.

…Even Though Spending is Up

Spending has increased month-on-month for four straight months and 13 out of the last 14 months. 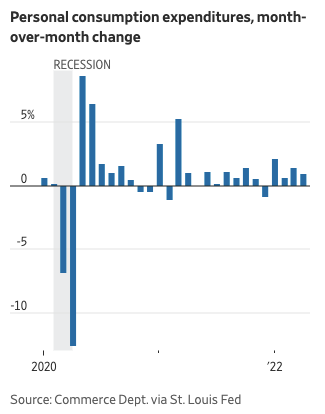 The above chart shows the month-on-month changes in personal consumption expenditures (PCE).

PCE is a fancy way of saying consumer spending.

From the Bureau of Economic Analysis:

Consumer spending, or personal consumption expenditures (PCE), is the value of the goods and services purchased by or on behalf of U.S. residents. At the national level, BEA publishes annual, quarterly, and monthly estimates of consumer spending.

Again, from the Journal (bolds mine):

The head of the nation’s biggest bank said the recent drop in Americans’ savings rate hadn’t altered his view that the government’s pandemic stimulus is still padding consumers’ wallets. He estimated that some $2 trillion in extra funds are still waiting to be spent.

“That fiscal stimulation is still in the pocketbooks of consumers. They are spending it,” he said at an investor conference Wednesday.

So consumption is up, thanks to the Biden stimmy.

But the savings rate is way down.

There’s $2 trillion left from the stimmy already paid out.

At the rate that American consumers spend, that gives the economy another 6-9 months before the roof caves in, all other things being equal.

Perhaps the most chilling thing Dimon said was this:

JPMorgan is bracing ourselves and we’re going to be very conservative with our balance sheet.

That means JPM will start to restrict its lending.

As a former banker, I think this is the prudent thing to do.

While it needs to happen, tightening up credit will slow down the economy.

Effect on the World

As a professor of mine once said, “If you’re in retail, you’ve got to be in America.”

Why would he say that?

Because America is the middle-class Valhalla on the planet.

The American middle class, in its glory, can outspend most affluent people in other countries.

Let’s do some quick, easy math.

The bar chart below shows the American economy as a percentage of the world economy from 2016 to 2026. 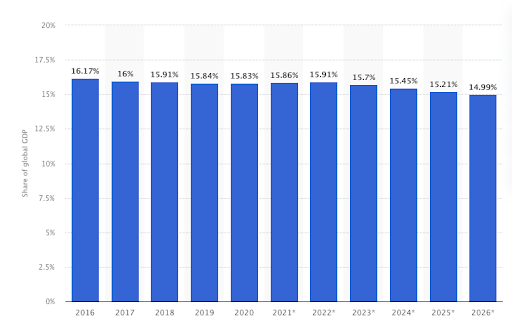 To keep it simple, let’s say the American economy is 16% of the world’s economy.

Now, how much of the American economy is consumption?

Next, let’s check the breakdown of GDP according to the Bureau of Economic Analysis.

I prefer to call it Grossly Deceptive Product.  Never mind.

GDP is the sum of all goods and services produced within a country’s borders.

GDP is often broken down as consumption plus investment plus government spending plus exports minus imports.  (GDP = C + I + G + (X - M)).

(Again, that’s just for the quarter.  Multiplying that number by 4 gets you about $19 trillion - a decent estimate for yearly GDP.)

For reference, 70% is the highest share of consumption in advanced economies.  Usually, a number closer to 60% represents consumer spending in most others.

In other words, when the stimmy runs out in 6 to 9 months, the world economy will puke.

I hope I didn’t get too didactic with you today.

But if you understand what I’ve written today, you’re ahead of 99% of the world’s population in terms of economic understanding.

Jamie Dimon sounds the alarm as a warning to us all.

The permabulls at CNBC and Bloomberg Television must have got too much for him.

The market is a discounting mechanism.

This means it considers all present information and “sees” into the future.

If that’s true, the market isn’t painting a rosy picture for us.

And the macroeconomic numbers back up that story.

And neither should yours be.

Citi trader loses bank $50 million. Even adjusted for inflation, I never had an error that enormous. Its dangerous to trade large orders during the early European hours.Happy Friday!Were...