Good morning from another overcast morning in Northern Italy.

I’m under the weather and wanted to write about Credit Suisse’s hot-off-the-press Global Wealth Report.

I’ll read it today, along with my mug of medicinal hot chocolate, and then report on it tomorrow.

Of course, whenever I think of my old bank, I think “scandal.” And with our piece yesterday on SBF and the FTX scandal, I thought I’d revisit my first-ever Rude piece from late April 2021.

This shows you that institutions can be just as stupid as MIT graduates (sorry, Dave!) but doesn’t condone either’s behavior.

It’s worth noting that FTX’s Head of Risk was formerly in Credit Suisse’s risk department. Yes, it was yet another red flag.

I’ve made slight cosmetic changes to the text to make it more readable. (Geez, I was so green back then…)

Have fun with it.

The Bank with a Death Wish

“Oops, I did it again,” sang Britney Spears.

Credit Suisse should adopt it as its theme song. My old bank has had a death wish for a while, but these last few months take the cake. Bill Hwang’s Archegos fund blowup has cost them $5.5 billion (yes, with a “b”). But before we get sucked in, let’s note that UBS (Used to Be Smart) lost $774m as well. Sorry, I just wanted to play fair.

The latest round of missteps has left Credit Suisse blushing. As my friend, a Goldman Sachs partner, WhatsApped me, “… your previous organization seems to be in perpetual trouble – with the management, espionage, risk management, dodgy people… makes for an entertaining read of the weekend FT!”

Let’s not rehash everything the bank has done to destroy itself over the past two decades. We can start in 2015, with the appointment of Tidjane Thiam. Thiam was supposed to be a savior after Brady Dougan’s volatile reign.

Thiam, an old McKinsey man (Shields Up! Red Alert!), decided to take the bank away from its recent trading makeover and turn it into a vast wealth management house. But that wasn’t the only thing. His idea - funnily enough, following UBS’s steps - was to meld the investment bank and private bank into a cross-selling “entrepreneur’s bank.”

On the face of it, it’s a great idea. Say the investment bank is covering a corporate that’s about to IPO. The founders would experience a “liquidity event.” That’s banker-speak for “those dudes are about to get very rich.” Thiam mandated that the investment bankers covering that corporate must introduce its founders to one of Credit Suisse’s private bankers.

Likewise, a private banker managing a high-net-worth individual’s money and realizing the HNWI’s company needs advisory or financing should introduce that HNWI to an investment banker.

This works incredibly well in Asia, where the money is much newer than, say, in Europe, where most of the wealth is inherited.

Some of you who worked for banks may recall that private bankers and investment bankers rarely speak to each other – especially about business – so this was a new way of doing things.

Long story short: the private/investment bank combo has led to a massive over-concentration of risk.

But before we even get into that, let me get James Bond on your a$$.

I Spy with My Little Eye… a new UBS Employee?

Iqbal Khan’s story is fabulous. Ambitious, hardworking, and annoyingly handsome, Khan rose through Ernst & Young’s Swiss arm’s ranks to become its youngest-ever partner. Later, he left there for Credit Suisse to become the Head of International Wealth Management at only 40 years old.

Tidjane Thiam was impressed. And then, rather incredibly, Khan moved right next door to him.

“To me, moving in next door like that, there are two signals you might be wanting to send,” says one Credit Suisse executive. “Either: ‘We get along so well I’d like to spend more time near you,’ or else: ‘I’m coming for you.’”

Well, Khan did come… for Thiam’s hedges! Ludicrously, the two fell out over the home improvements Khan was making to his house. It wrecked Thiam’s view, and the noise was unbearable.

No, I’m not making this up.

So, Khan resigned and went to UBS, Credit Suisse’s larger rival and next-door neighbor. Thiam was so furious – and worried – he hired a private investigator to follow Khan.

Unfortunately for Thiam, this PI was more Johnny English than Philip Marlowe. Khan realized he was being followed and went to the police. Thiam was embarrassed and, a few months later, was out the door himself.

Next up, Lex Greensill and his supply chain finance company.

Credit Suisse lent to them on the back of that. Now, it’s in the hole for $90 million of the $140 million it loaned to them. Not only that, but clients are screaming for Credit Suisse to make good on the supply chain funds CS sold them that were described as “safe.”

Get this: The bank’s risk management team rejected those loans, but upper management stepped in to approve the loans because Lex Greensill was also a private banking client. That’s concentration risk in a nutshell.

sub What’s a nice guy from Tenafly doing in a place like this?

Bill Hwang, of Tenafly, NJ - of all places! - is a story of ambition overtaking reason. He was a protégé of the great Julian Robertson. Upon Robertson shuttering Tiger Management, he seeded Hwang $25 million to run Tiger Asia. Hwang grew the fund to over $5 billion at its peak.

But… in 2012, Tiger Asia Management admitted to insider trading and paid more than $60 million in fines. In 2013, Hwang turned Tiger into a family office called Archegos. That way, his trading would be less regulated than if he remained a hedge fund. In 2014 in Hong Kong, Hwang was banned from trading for four years.

It’s as if Chemical Ali was Hwang’s PR officer: “There’s nothing to see here!”

Archegos was reportedly worth between $10-15 billion with 5x leverage. That is, Archegos used that $10-15 billion to trade $50-75 billion worth of stock. It was also a highly concentrated fund.

How did they do that?

These swaps allow the fund to earn the equity return on the securities they want but don’t have to file a 13F disclosing those positions… because they don’t own the stock. (The banks do and pass on the return.) Of course, this goes south once the equities fall, as they did for Archegos.

Why on earth would Credit Suisse take this risk?

Because Hwang was almost certainly a private banking client, as well.

As one of my old trader buddies from Barclays WhatsApped me, “Tiger Asia was one of my clients. I’m amazed the PB did business with him again.”

Lara Warner, the Head of Risk and Compliance, and Brian Chin, the Head of the Investment Bank, have been relieved of their duties.

But to my mind, not enough people are getting fired. With zero interest rates, it takes a stupid amount of risk for something to blow up. There’s simply no penalty to pay when you can roll over your financing at zero cost in perpetuity.

I don’t hate bank stocks because of the earnings volatility or the razor-thin net interest margins. It’s that the tops of the houses are rotten.

I’m convinced some scribe screwed up a few thousand years ago. Money isn’t the root of all evil. But money printing is.

As seen on LinkedIn: 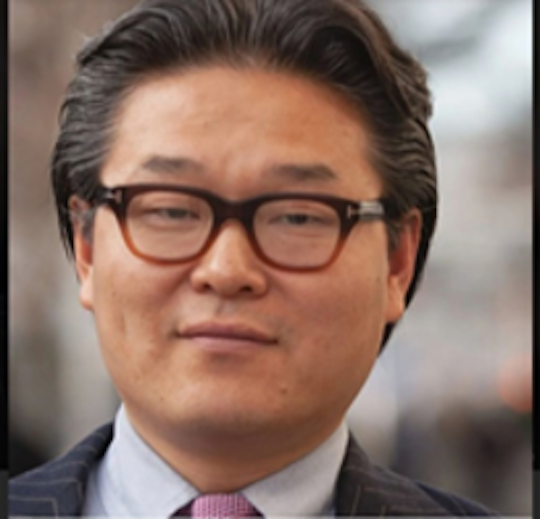 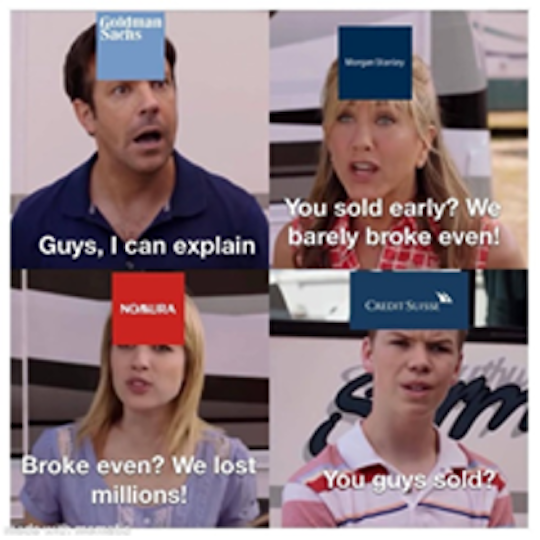 And finally, from an Australian star trader:

“Hwanged (verb): To suffer a permanent loss of capital as a result of extending excessive and imprudent leverage to someone who has been found guilty of securities fraud.

‘I’m stuck in the office, bro. Risk are making me review all my credit lines. The bank doesn’t want to get Hwanged.’”

Hilariously, a comment from a Hong Kong trader follows:

“BTW, In Cantonese, when you say something is hwang (meaning yellowed), it means destroyed, lost, so your verb of Hwanged actually means something in Cantonese Hong Kong.”

Tower of Babel be damned. We all speak the same language on the way down!

Have a great day today!