Good morning from yet another chilly morning in Northern Italy.

Before I get going, I wish you and yours a Happy Thanksgiving! It’s still the best holiday in the States for my money.

Tonight is the busiest bar night in America, and I hope you see friends old and new!

Rude reader Damon wrote in with another stimulating question just as I was running out of ideas for the holiday weekend.

Although gold went up a little on crypto woes, it still seems unreasonably low given the market. Is this due to false enthusiasm on the inflation/recession front, or perhaps Russia and China are now using their stockpiles to avoid US Dollar sanctions, and flooding the market?

On a similar note, what is the current situation on the alignment of Russia, China, India, Brazil, Iran et al to create an alternate banking exchange and break US control of “petrodollars”?

I will break down his query into smaller questions and address each.

But first, we’ll do a tiny bit of theory.

The Theoretical Price of a Commodity

Hedging with futures simply means “taking the opposite of your physical position.”

Let’s say I’m Cadbury’s chocolate bar maker. I need cocoa to make my chocolate. There are two smart ways to acquire that cocoa, as I’m worried prices will rise.

I can buy the cocoa now and store it. Or I can buy a 3-month cocoa future.

(I don’t want to wait three months to buy it because of the price risk I’d incur.)

Theoretically, both alternatives should cost the same amount.

If I buy the cocoa now, I’ll have to pay the cash price immediately, plus storage and insurance costs and any foregone interest I’d have earned by keeping the money in the bank.

If I buy a three-month cocoa future, someone else will do precisely the same, not for free! They’d charge me the same amount: cash plus storage, insurance, and foregone interest.

Using simple mathematics, the cash price, or present value adjusted for costs over time - that is, we put our costs in the “r” - gives me my future value.

If we rearrange the equation to figure out our cash price, we get the following:

Looking at this formula, it’s easy to see if rates, the “r,” increases, then the price or “PV” will decrease.

Another word for rate is yield. That means our rate will be derived somewhat from the corresponding yield in the market.

And what has Chairman Pow done to our yields? Raised them like a madman!

As those yields go up, any asset valued this way will fall.

Let’s face it: most assets are priced this way.

An oversimple way to value a real estate investment is to take the Net Operating Income and divide it by the capitalization rate. That will give you an idea of how much a piece of property is worth.

It looks like our futures equation, but the denominator is different because we assume perpetual cash flows. (That is, the building doesn’t collapse or deteriorate to the point of disuse. As I said, it’s oversimplified.)

I show you this because Jeroen Blokland on LinkedIn presented the below chart: 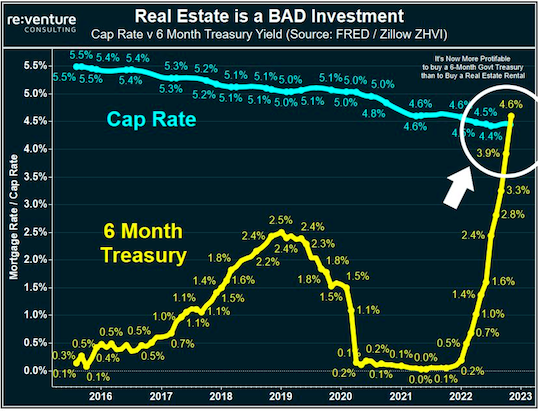 The chart [above] is from Nicholas Gerli, founder of Reventure Consulting. It shows that the 6-month US Treasury offers more yield than the ‘average’ real estate investment.

Adding the fact that 6-month US Treasuries are way less risky than real estate investments, the former brings the superior investment alternative.

If you can earn a higher yield in government securities than by managing property, why would you own property?

Likewise, if you can earn a good yield in government securities, why would you own an asset that doesn’t produce income, like gold?

And this is why gold isn’t rallying to the moon. The Fed has made it better to stick your money in Treasuries.

The Same Applies to Bitcoin

Now, if you bought your gold at $252/oz when that imbecile Gordon Brown announced the Bank of England was selling its gold holdings, you’re still money good.

You're still laughing if you bought your Bitcoin for under $100. After all, you’d be up at least 160x.

The point is you needed to be in early to have made any money.

But to get in now is to take an enormous risk.

When Should You Load Up on Gold?

I agree with my friend and colleague Dan Amoss. When the Fed pivots and genuinely starts to cut rates, back up the truck.

As the “r” gets smaller, the PV (or price) will rise. All moves up before that will be reversed.

Chairman Pow must relent on his hiking strategy before we see the real rally in gold.

This chart above is the 10-year yield minus the 3-year yield. When this turns positive again may be the starting gun on a gold rally.

Russia, China, and the BRICs

Here are the top 10 Countries with the largest gold reserves (in tons):

It’s improbable that Russia and China are selling any of their gold. In fact, I’d say they were acquiring large amounts of the barbaric relic.

Since the beginning of the Russia-Ukraine War, the West has barred Russia from selling its gold. That doesn’t mean Russia has complied, of course.

But I don’t think Russia is the marginal seller bringing down the gold price.

Gold just isn’t attractive with yields where they are right now.

As for the petrodollar, its days are numbered. 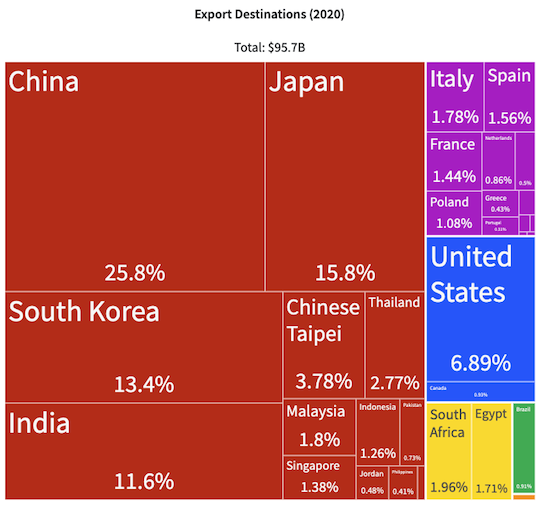 The United States matters but isn’t the biggest buyer by a long shot.

We know the Saudis work with the Russians through OPEC+ to keep oil prices high.

And its largest oil buyer is China.

The world will look very different over the next ten years as the BRICs fully emerge as a power bloc.

A big thanks to Damon for his thought-provoking question.

Alas, a conspiracy isn’t holding the gold price down.

A privately owned cartel is. That’s the Federal Reserve.

But this story will end… with a pivot.

When this story ends is a mystery.

But when the Fed pivots, back up the truck and load it with gold.

In the meantime, have a wonderful Thanksgiving! You deserve it!