Are We Already at War With Russia?

Good morning on this fine sunny day from Asti.I hope you had a restful and rejuvenating weekend.As usual, I lazed around, reading some interesting things.But unusually, a column in The New York Times piqued my interest.Thomas Friedman penned a piece titled, The War Is Getting More Dangerous for America, and Biden Knows It.Well, shit, Tom. Welcome to reality.Did anyone think Ukraine sank the Moskva on its own?Or that all those Russian generals with perforated heads were the work of the Ukrainian army?I mean, the Ghost of Kyiv has been thoroughly debunked.And with that has come some hilarious mea culpas.All this just substantiates my opinion theres not a single thing the Western media tells you about this war that you should believe.Its been a steaming pile of bullshit, from pillar to post.And now, you ask, why Im reading Friedman?Well, my friend, let me tell you all about it.

Friedman and The Times

Glenn Greenwald once said of Friedman in a 2012 Salon piece:

I say this with all sincerity. If I had to pick just a single fact that most powerfully reflects the nature of America's political and media class in order to explain the cause of the nation's imperial decline, it would be that, in those classes, Tom Friedman is the country's most influential and most decorated "foreign policy expert."

In 2009, Matt Taibi wrote a piece titled, Someone Take Away Thomas Friedman's Computer Before He Types Another Sentence.In three of the most excellent paragraphs Ive ever read, Taibbi writes:

I've been unhealthily obsessed with Friedman for more than a decade now. For most of that time, I just thought he was funny. And admittedly, what I thought was funniest about him was the kind of stuff that only another writer would really care about -- in particular his tortured use of the English language. Like George W. Bush with his Bushisms, Friedman came up with lines so hilarious you couldn't make them up even if you were trying -- and when you tried to actually picture the "illustrative" figures of speech he offered to explain himself, what you often ended up with was pure physical comedy of the Buster Keaton/Three Stooges school, with whole nations and peoples slipping and falling on the misplaced banana peels of his literary endeavors.

Remember Friedman's take on Bush's Iraq policy? "It's OK to throw out your steering wheel," he wrote, "as long as you remember you're driving without one." Picture that for a minute. Or how about Friedman's analysis of America's foreign policy outlook last May: "The first rule of holes is when you're in one, stop digging. When you're in three, bring a lot of shovels."

First of all, how can any single person be in three holes at once? Secondly, what the fuck is he talking about? If you're supposed to stop digging when you're in one hole, why should you dig more in three? How does that even begin to make sense? It's stuff like this that makes me wonder if the editors over at the New York Times editorial page spend their afternoons dropping acid or drinking rubbing alcohol. Sending a line like that into print is the journalism equivalent of a security guard at a nuke plant waving a pair of mullahs in explosive vests through the front gate. It should never, ever happen.

I present those quotes for two reasons.First, Greenwald and Taibbi are excellent investigative journalists, write exquisitely, and possess finely tuned bullshit-o-meters.Second, I dont want you to expect much from Friedman.But here we go anyway.In the Times, Friedman writes:

As a journalist, I love a good leak story, and the reporters who broke those stories did powerful digging. At the same time, from everything I have been able to glean from senior U.S. officials, who spoke to me on condition of anonymity, the leaks were not part of any thought-out strategy, and President Biden was livid about them. Im told that he called the director of national intelligence, the director of the C.I.A. and the secretary of defense to make clear in the strongest and most colorful language that this kind of loose talk is reckless and has got to stop immediately before we end up in an unintended war with Russia.

Tom, baby, I hate to break the news to you.Were already at war with Russia.Were just using the Ukrainians to fight that war and paying for it with explosive inflation.By we, I mean every person living in The West.Even the ones who studiously avoid paying tax.For there are only two ways to pay for a war.The first is by taxing the population.I doubt more than 1% of the population would happily donate to the cause in this day and age.Theres too much Internet debunking too much bullshit from lying, thieving politicians.Even the spurious argument of If we dont stop Putin now, hell roll through Europe doesnt smack of enough realism to make Americans who are 3,500 miles across the Atlantic open up their wallets.The second way to pay for war is to inflate the money supply.And when the policy is inflation, everyone pays.Thats because inflation is a tax levied by a central bank and not a legislature.Every dollar printed for war is a tax on the consumer.Some pay a small percentage of their incomes (the rich), and some pay a lot (the poor).But everyone pays nonetheless.

What Does Brandon Think?

But whats especially scary to me is that the President himself, or whats left of his brain, doesnt seem to get is that the Russians know this is a proxy war.The Russians are under no delusion theyre fighting only Ukraine.As soon as the rest of Europe started sending weapons, the war expanded.Vicki Nuland and her ilk were always directing Ukraine, but this could be kept somewhat under wraps.Or at least, the Russians could pretend for safetys sake that American involvement was merely logistical.But the game shifted when the USG directed Americas European vassal states to move heavy weapons.What was a minor regional conflict went continent-wide, much to the glee of the US military-industrial complex.Friedman further writes:

The staggering takeaway from these leaks is that they suggest we are no longer in an indirect war with Russia but rather are edging toward a direct war and no one has prepared the American people or Congress for that.

Staggering? Prepared? Edging?Tom, do you mean brainwashing Americans into thinking this war is in their interests?Except It isnt in their interest at all.The war isnt even in Europes interest, for crying out loud.But what this passage really says to me is that the US thought it could get away with being financier and not co-combatant for far longer than it has.Friedman adds:

The view of Biden and his team, according to my reporting, is that America needs to help Ukraine restore its sovereignty and beat the Russians back but not let Ukraine turn itself into an American protectorate on the border of Russia. We need to stay laser-focused on what is our national interest and not stray in ways that lead to exposures and risks we dont want.

What have they already done in Ukraine?If America isnt there to blow up Russian ships and leadership, this war is far tinier and possibly already over.But as usual, American involvement means prolonging a conflict with printed fiat for far longer than it shouldve lasted. (See: every war from World War I until today.)Lets see just how inflation is doing.

Labor costs rocketed last week, up 11.6% since the previous quarter.Analysts were expecting 10% 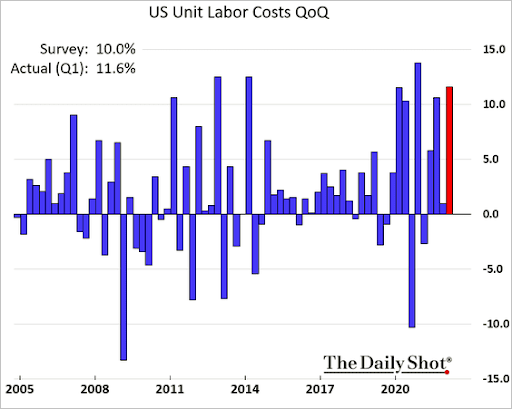 And how about taking a broader view of wage inflation: 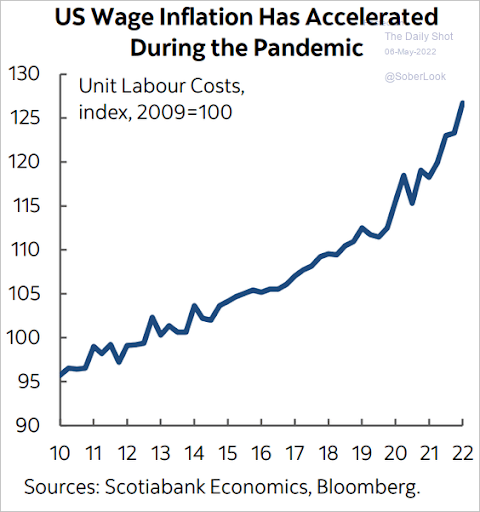 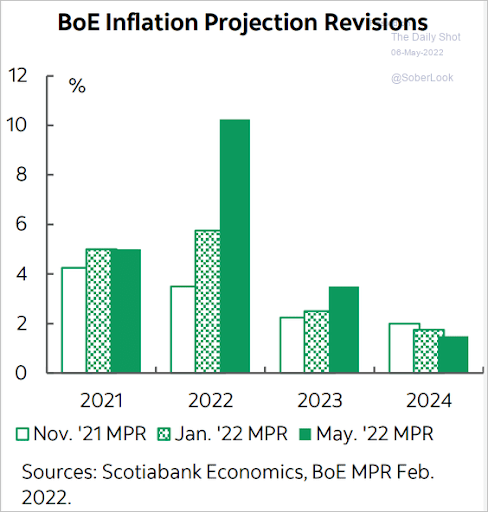 *MPR is the Monetary Policy Report the Bank of England prints.UK companies have increased prices: 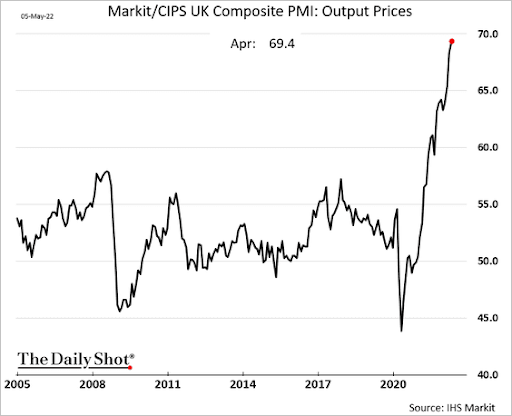 And how about them Turks: 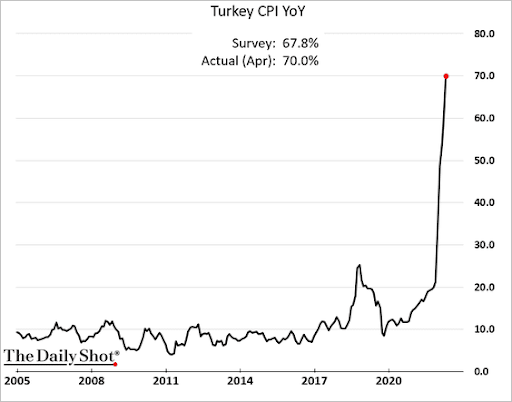 Heck, even Japan is getting some inflation going: 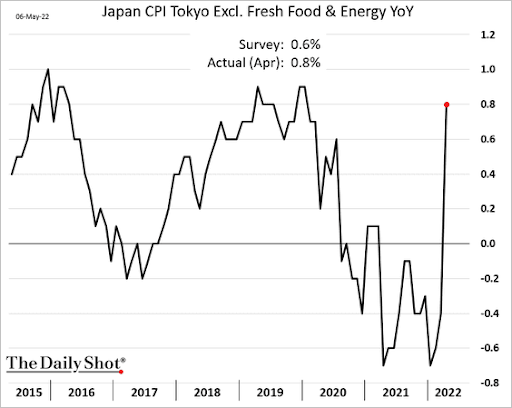 The incompetence of US leadership and its journalistic lapdogs continue to astound.This war needs to end and end quickly before we get worldwide hyperinflation along with yet another tick in the loss column.European leadership needs to wake up and realize how cold the winter will be next year without Russian energy.But I dont see that happening with Ursula van der Leyen running the show.So we need the USG to be the adults in the room.Alas, I dont see that happening, either.Until tomorrow.All the best,Sean

The Nasdaq Composite fell nearly 4% yesterday. The fall followed a dire previous week's performance. The Nazzie is now down 10% since Wednesday and 27% since Novembers high.Good morning...