Amazon’s Stock Split and What It Means For Investors

Happy Tuesday from the foothills!

It rained last night.  I couldn’t believe it.

We’ve had nothing but sun and fun for so long that I forgot the ground gets watered occasionally.

Be that as it may, it’s a brilliantly sunny day today.

As I grabbed my java, I noticed AMZN’s stock price was a digit short.

Its board approved a colossal 20-for-1 stock split.

Why do boards approve stock splits?

What do stock splits actually do?

In this edition of the Rude, I will get into the theory and motivations behind stock splits.

This time, I’m not so sure.

One of my biggest regrets is not taking Peter Lynch’s great advice, “Buy what you know.”

I use it practically every day.

When you have lived in Asia for 13 years, sometimes Amazon is the only way to get the things you love delivered to your front door.

Since we moved to Italy, Pam and I have ordered no less than five things from Amazon.

And silly me… I never bought the stock.

But now may be my big chance.

But the truth is, it’s no bigger chance than I had on Friday.

But it feels different.

It feels puny for me to say I own one share of AMZN versus 20 shares of AMZN.

Companies know this and act accordingly.

One share of BRK.A currently trades at $468,400.  That’s right, nearly a half million dollars - or the average house in New Jersey - for one share.

Most people can’t afford that, and Warren Buffett knows it.

Yes, he created Class B shares for retail investors, but that wasn’t out of the kindness of his heart.  Buffett didn’t want unit trusts masquerading as Berkshire lookalikes to pop up.

“We want to attract shareholders who are as investment-oriented as we can possibly obtain, with as long-term horizons,” he said. If Berkshire were to split the stock and lower its price, “we would get a shareholder base that would not have the level of sophistication and the synchronization of objectives with us that we have now.”

Since Warren Buffett does his business better than anyone else, this makes much sense.

After all, dealing with a snot-nosed young hedgie would frustrate the hell out of the old man.

If that’s true, then why would anyone want to split their shares?

When a company announces a stock split, it usually signals to the world the company is in rude health. 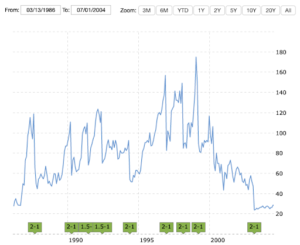 That’s a whole lot of confidence.

It just kept going and splitting its shares.

Theoretically, if a Microsoft investor wanted to collect his dividends, he could cash them all in at once by selling the stock.

Just owning MSFT stock and watching it split made many a paper millionaire in the 90s.

As for company control, Bill Gates owned nearly a quarter of the outstanding shares at the time.

So no hedge fund could force him into doing something he didn’t want to do.

So why is Amazon splitting now?

As you can see from the chart below, AMZN stock had split three times.  But until yesterday, it hadn’t done so this century! 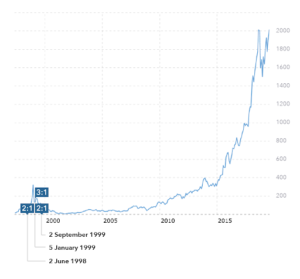 What especially concerns me is that there were no splits since 2015.

Jeff Bezos had taken a page out of Buffett’s book.

You either understand Amazon’s business, and you’ll buy the stock, whatever the price.  Or you won’t.

So adding a truckload of retail investors and hedgies wasn’t high on Bezos’s list.

And I think I know why. 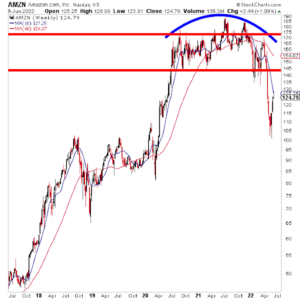 But since April 2020 - remember AMZN loved the Covid lockdowns - it was trading sideways.

There were a couple of false breakouts and breakdowns, but sideways most of the time.

Then in April this year, AMZN broke down definitively out of the trading range to the downside.

That trading range could’ve been a re-accumulation for another upswing.

Now, it’s clear that it was a distribution structure, and most of the smart money is out of AMZN.

Of course, the hope is that this is a temporary breakdown, and Amazon stock will recover.

If it does recover, shareholders will be thrilled.

If not, AMZN at $65 is not out of the question from a purely technical standpoint.

AMZN’s Board May Want Into the Dow

Another interesting point Forbes brought up is that Amazon’s board may want to get into the Dow Jones Industrial Average.

I honestly don’t know why anyone still cares about the Dow, but they do.

It still has a prestige cache attached to it.

But a move like this makes me think AMZN’s board has resigned itself to the fact AMZN is a vast, monolithic, slow-growing retail company.

As the Dow is a price-weighted index, reducing its share price with a split gets its price more in line with other Dow constituent companies.

This is important as price-weighted indexes are biased toward high-priced stocks.  The Dow selectors don’t want that.

And since being in the DJIA forces Dow fund managers to own the stocks in the index, this would goose AMZN’s share price.

However, it’s crucial to remember artificial price lowering via stock splits doesn’t change the fact that AMZN is one of the largest companies on earth by market capitalization.

Retail investors may move in to snap up AMZN shares after its split.

I’m not going to rush in.

Right now, AMZN’s chart is uglier than a sack of buttholes.

It created headlines for a stock that’s been hammered for two months.

It made the stock cheaper for retail investors and hedge funds.

It made current shareholders feel better because they own 20x the shares they used to.

Although that’s at 5% of the previous price.

While MSFT’s share splits in the 90s showcased a world-beating company in its prime, AMZN’s current share split looks like a desperate attempt to attract investors.

Tread carefully before you wade in.

Take The Oil But Not the Golf!