It’s a gorgeous late summer morning in the shadow of Hagia Sophia.

Later today, I’ll fly down to Bodrum for the Property and Freedom Society’s 2022 Annual Meeting.

I just saw Iowa Michael and Doctor Dutch off, as they have an earlier flight.

As economists of the Austrian School, the inflation numbers aren’t surprising to us.

Jay Powell has a few tricky weeks ahead of him.

He’ll raise rates next week by another 75 bps.  But after that, he and the rest of the FOMC must determine how much pain they’re willing to inflict on your 401(k) to get your food bills down.

And Joke Biden will have to see how much ground he needs to give on energy to get those stubborn gas and diesel prices down.

In this edition of the Rude, I’ll look at the inflation numbers, the market impact, and what may happen.

Just three days ago, everyone - and I mean everyone, except us - thought inflation was coming down.

I still didn’t know why the market was so sure inflation was heading to 2%.  Perhaps it was some mathematical deficiency, but inflation expectations were way down.

Quickly, thanks to Dr. Lev Borodovsky at The Daily Shot for the graphics below: 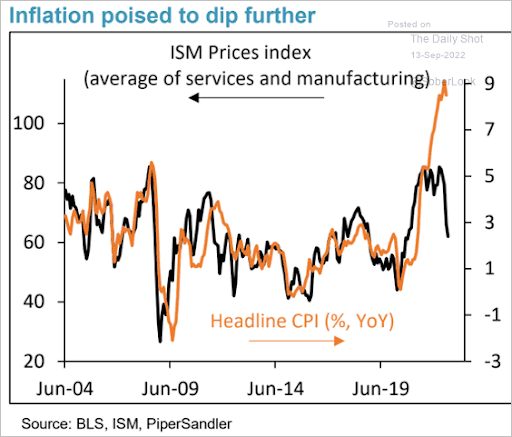 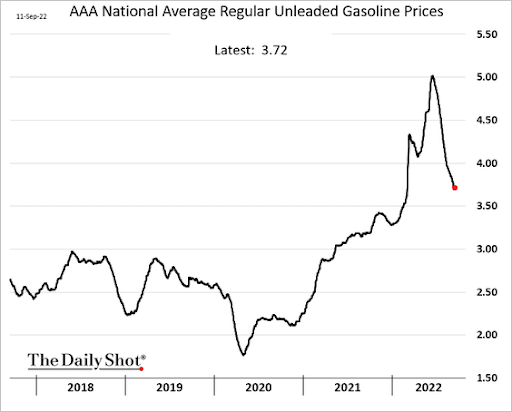 I know you know this, but please reiterate this to your friends: falling gas prices do not equal falling prices.

I’m glad gas prices came down, but that does not end inflation.

“Houston, we have a problem.”

Jay Powell must have flipped his wig.

The CPI roofed it.  And it was the Core CPI that was the problem.

Quick reminder: Core CPI has food and energy stripped out because they’re volatile.

Another one to remind your friends of: prices still increased 8.3% since last August.

Ok, inflation is less than it was the prior month.  But we’re still in a massive inflationary environment.

Again, from The Daily Shot: 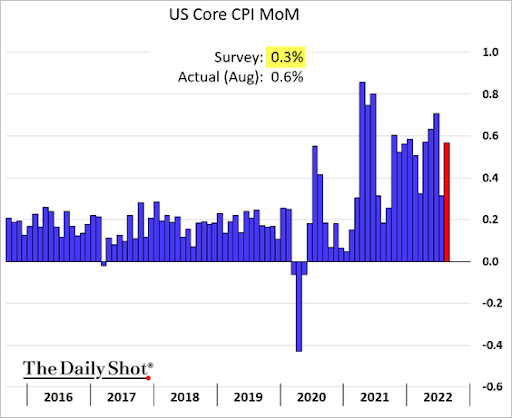 The actual month-on-month inflation was double the expected amount.

What drove that?  Living costs: 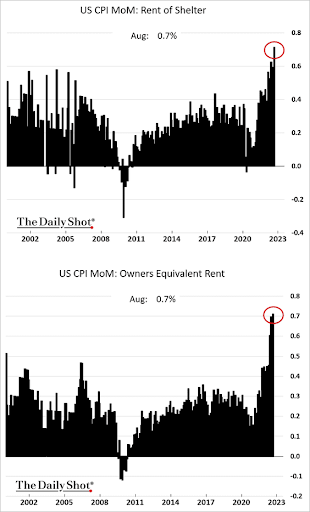 For your edification, here’s the Bureau of Labor Statistics (BLS) explanation of shelter costs:

The index for shelter, the service that a housing unit provides its occupants, is one of the largest parts of the CPI market basket—the goods and services that American households consume.

Owners’ equivalent rent of residences (OER) and rent of primary residence (rent) measure the majority of the change in the shelter cost consumers experience. All three of these series are published each month in each area for which CPI data are published.

The CPI for shelter also includes lodging away from home and tenants’ and household insurance.

So house prices are coming down because housing affordability is down.

And since house affordability is down, rents are going up.  Yikes! 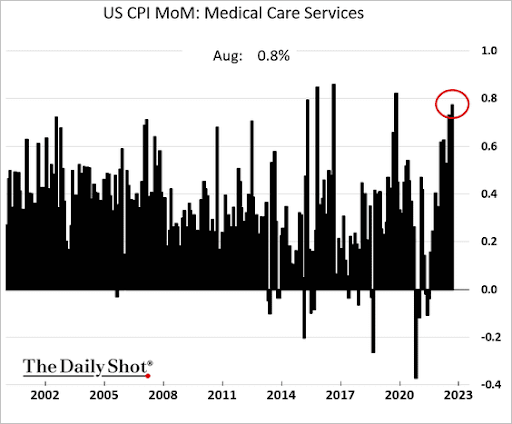 Once the market saw these numbers, it got ugly in a hurry.

The Markets Cry For Help

Here’s how the SPX looked on the day: 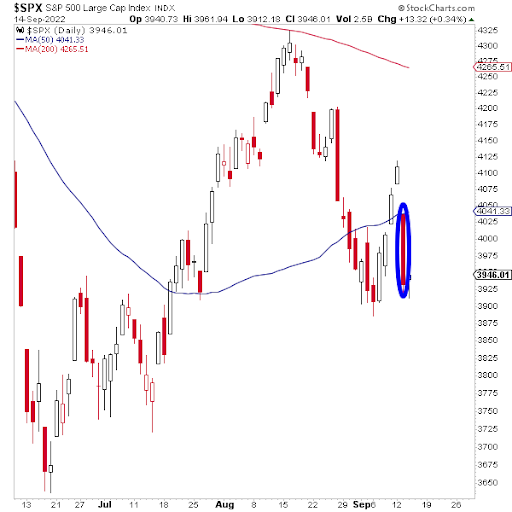 The SPX finished down 4.33% on the day, a particularly ugly move.

The index is back down below both the 200-day and 50-day moving averages.

Why is this important?

Good friend and colleague, the devilishly handsome Jonathan Rodriguez, posted this in the chat  during our editorial meeting yesterday: 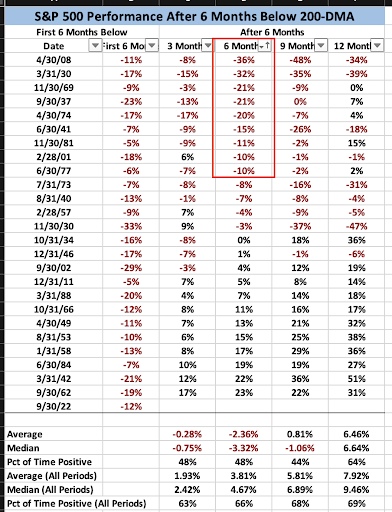 No investor could be happy seeing those numbers (unless he was short!).

But the worst thing about all this is gold: 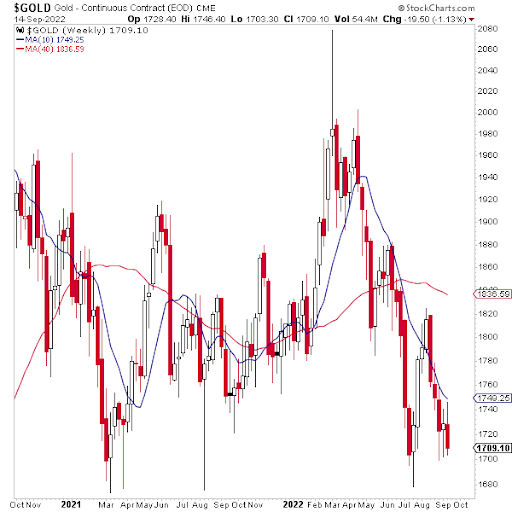 I know JP Morgan already paid a $920 million fine for their part in manipulating the gold markets.

What We Can Expect

I hope everyone will stop smoking Hopium for a start.

But I’m not sure that’s going to happen.

Check out this idiotic headline in The Wall Street Journal:

The comments are priceless.

Here are some of my favorites:

Least dirty shirt in the room (1) and (2) due to reserve currency status have been  able so far to print our way out of a great reckoning..  That is, until that parlor trick no longer works and we can't.

Innovation, my foot!  Our "allies" are broken economies trying to print their way to prosperity.  Their currencies are approaching the precipice.

In 2022, the Fed stopped printing while the remainder kept printing.  When the Fed starts printing again, it will go the other way.  Why?  Because America's government is into wasting its capital on a losing empire strategy.

The U.S. dollar is dangerously overvalued.  Despite tough talk from the Federal Reserve, the massive U.S. debt means that the Federal Reserve cannot raise rates much higher without triggering a financial crisis.   Investors should use their dollars to buy real assets -- real estate, gold, oil, and gas.

(I’ve long thought WSJ subscribers are brighter than the WSJ’s scribes.  Let’s start calling them superscribers, as they’re above the scribes, not below them!)

The EURUSD pair is an excellent example of this.

That’s why EURUSD is falling off a cliff.

Japan’s rates are still slightly negative at -0.10%, a full 260 basis points below the USD rate.

That’s why the USDJPY is roofing it.

If that’s not a puff piece, I don’t know what is!

Inflation isn’t transitory, much to Washington’s chagrin and surprise.

Gold isn’t protecting you from inflation at the moment for reasons I’m unsure of.

Unlike inflation, this column is transitory.

So I’ll see you tomorrow, from Bodrum!