And indeed, I won’t fight it.

Yesterday was an enjoyable day for long investors, and they should feel happy that we may be breaking out of a prolonged slump.

Today is Armistice Day, celebrating the end of the most wasteful, awful, and dumbest war in all human history.

My one condition is that I can provide context. I’m big on context because, as Mark Twain once said, “There are three kinds of lies: lies, damned lies, and statistics.”

Twain attributed the quote to British Prime Minister Benjamin Disraeli in his Autobiography, but Disraeli never said it.

However, the saying is a helpful reminder that all may not be what it seems.

In today’s Rude, I’m going to walk through yesterday’s action to see if we can get a clearer picture of the current goings-on.

As I was lounging on my living room couch last night wondering what the heck happened, Brian Maher’s Daily Reckoning dinged into my inbox.

The DR gets there at midnight my time, so I miss it far too often.

Brian’s is a voice of measured sanity in a sea of emotion. He writes:

You might bellyache that 7.7% year-over-year inflation still represents a 7.7% larceny of your money. You would be correct.

And it is our sincere regret to inform you: Today’s report reveals that real wages have retreated for the 19th consecutive month.

A 7.7% larceny is nonetheless a lesser larceny than an 8.2% larceny. And Wall Street is alert, keenly, to silver linings.

If you don’t read the DR already, get on it!

For some fun, you can see some were about as impressed as I was with the number. 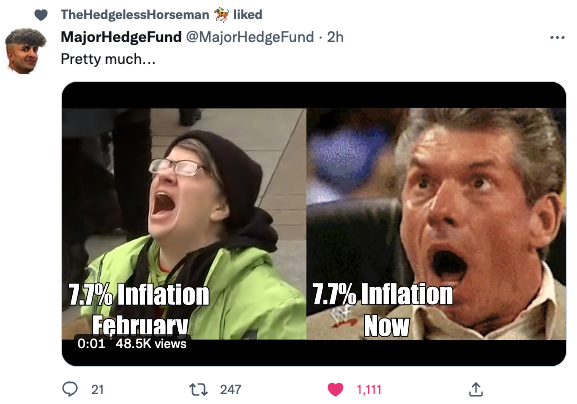 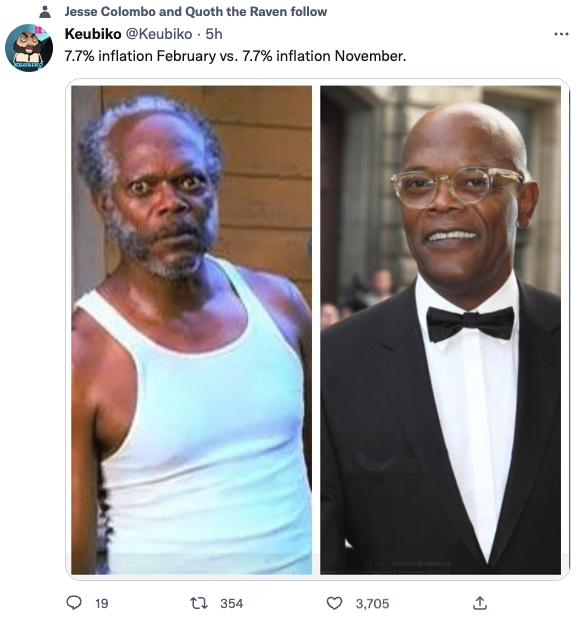 As Brian mentioned, the October year-on-year inflation print came in at 7.7%, versus a consensus estimate of 7.9% and lower than September’s 8.2% y-o-y increase.

But is it decreasing all that much and for good?

However, the markets didn’t care. It latched onto that theme, and away we went!

Here’s how the market (over)reacted: 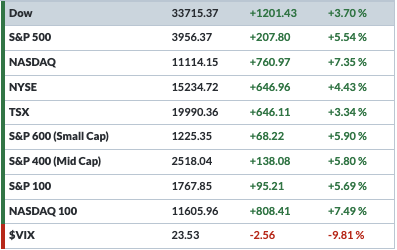 Again, it was a good inflation number.

I don’t think so.

Worse, too many people may take this as a bottom and pile back into equities. 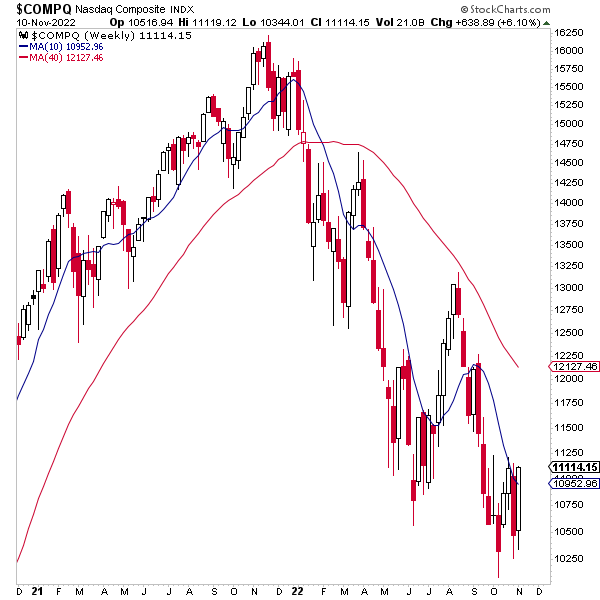 Even with yesterday’s colossal move, we’re barely back above the 50-day moving average.

Is it possible that the bear market is over? Yes, there’s always a possibility of that.

Is it a probable outcome of yesterday’s move? No.

For the broader market, the story is more compelling. 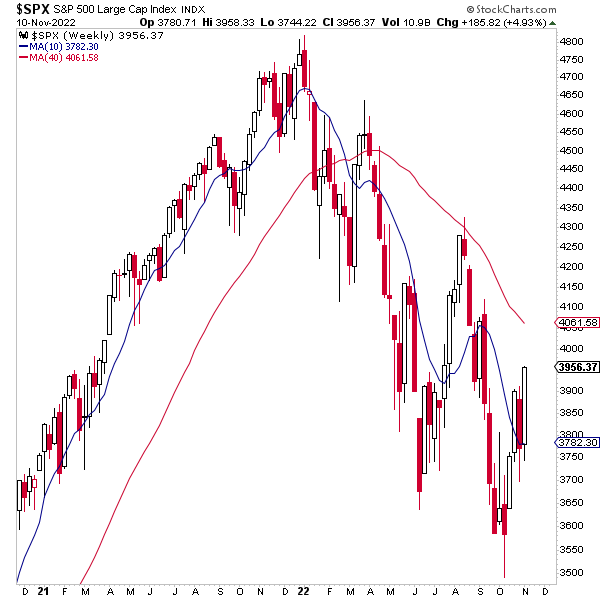 This time, it may not.

Still, it’s not a screaming buy signal for me. 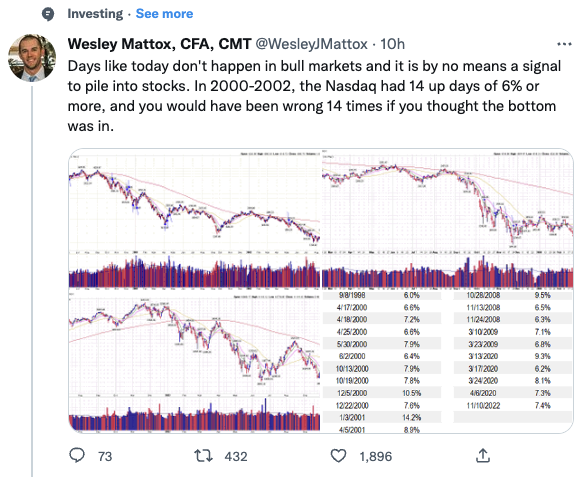 History may not repeat, but it rhymes.

So why do we see such furious rallies during bear markets? 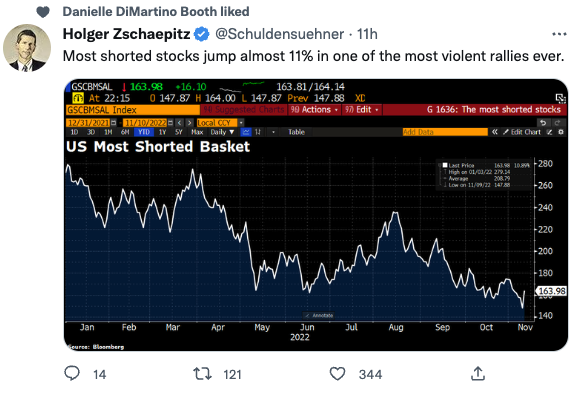 As Holger Unpronounceable tweeted above, there was massive short covering yesterday.

That means many speculators were short the market going into yesterday’s numbers and had to buy back their shares immediately to mitigate their losses.

Then we had the Fed speakers yesterday. According to Zero Hedge:

So CPI stoked the market's rally then Dallas Fed's Lorie Logan poured gasoline on that fire by signaling The Fed would soon slow its pace of tightening...

“This morning's CPI data were a welcome relief, but there is still a long way to go,”

“While I believe it may soon be appropriate to slow the pace of rate increases so we can better assess how financial and economic conditions are evolving, I also believe a slower pace should not be taken to represent easier policy.”

Basically echoing the FOMC statement and trying to position herself a little towards Powell's comments. Fed's Harker and Daly also reiterated the same comments, specifically citing "the effect of cumulative tightening," but noting that there is a need to tighten further and that 50bps is still a significant rate hike.

And Fed's Esther George warned that "monetary policy has more work to do," but did bring up the risk of financial market instability.

So, all 5 Fed speakers confirmed higher rates from here, 3 signaled somewhat less hawkishly, 1 signaled a slight fear of overtightening, and 1 was full-hawktard.

In the same piece, Zero Hedge reminded us where they think we are: 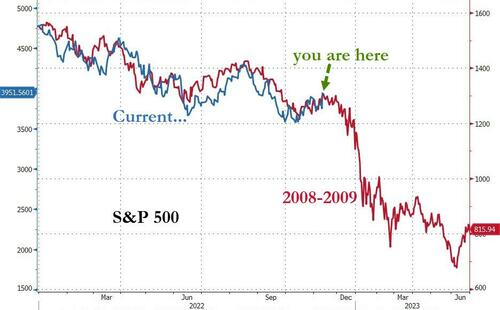 Not great, is it?

The Fed’s Next Moves

We return to Brian’s piece:

Only yesterday those odds read 56.8%.

Today those odds plummeted to a wishful and hopeful 14.6%.

Yet as we are fond to note, statistics are lovely liars. Does today’s inflation report truly draw an accurate sketch? Or does it distort rather than clarify?

We would remind you that nearly two-thirds of consumer spending channels not into goods — but into services.

These include rent/shelter. Health insurance. Automobile insurance. Travel and recreation in their various manifestations — to list some.

Here’s how Jim Rickards sees it:

I agree with both Brian and Jim.

But I’m not sure if those views were any different than the market had two days ago.

The market seemed sure that December would always be a 50 bps hike.

But as we’ve got a lag on the effect of the hikes, the vital thing to watch for now is how March 2022’s hike is influencing the economy.

And then, the rest of the hikes will make their presence known.

How hard and fast will the economy slow down?

And if the Fed overshoots - which it almost certainly will - do you want to own stocks in that kind of recession?

And later, let’s grab a glass of Barolo, Barbaresco, or Nebbiolo and drink to our good fortune.

Let’s also enjoy a relaxing weekend which we’ve done much to earn.

And then, on Monday, let’s return rested and ready to ascertain not where the market is going, but what the heck the market is doing!

Then we can get on maneuvers ourselves.

In the meantime, have a fantastic weekend!