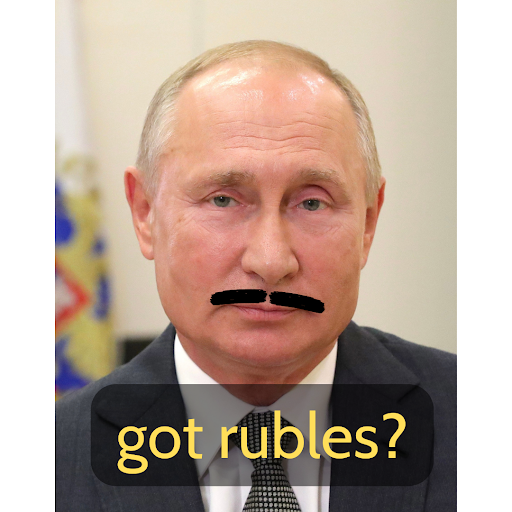 Good morning on this quiet Thursday from the rural Philippines.

Only a week until I head to Europe, the land of insane energy prices.

As I was sitting in my chair this morning, I was fondly reminiscing about the 1980s.

Thats when America was by far the planets garden spot, the rest of the world wanted to emulate the place, and quarterbacks knew how to run a 2-minute drill.

And today, my friends, is the day that era finally ends.

Its the day, every decade or so, when the dire predictions of the Austrian School economists come true.

For the first time since 2008, youre correct.

I dont want to overegg the pudding, but today will be remembered as the day powered shifted irrevocably eastward, towards Mackinders Heartland and away from its periphery.

How did it all come to this?

Oh, thats easy. Hubris and a lack of strategic thinking. Lesser sons riding on the momentum of better men.

But it really comes down to this: you cant trust western governments with your money anymore, and the whole world now knows it.

The pieces have fallen into place.

The US has embarrassed itself; the UK closed its financial center to everyone but ESG investors, and Switzerland has given up its neutrality.

Poland is itching for a fight; why, Ill never know.

Oh, its because they think they can trigger Article 5 and end Russia once and for all.

Sweden has just abandoned its political neutrality to send weapons to Ukraine.

Does Sweden really think NATO will come to its aid if Russia attacks its weapons convoys?

The virtue signaling is just staggering; ludicrous, even.

The EU needs to wake up and fast or its economy is going to be destroyed.

For the US, the damage is already done.

Hunter on a Thursday Morning

Every second Thursday, my friend and mentor, Hunter Hastings, and I have a 3045-minute conversation.

Its one of the highlights of my week, as I can vent about business and politics and hear some great advice.

I had postulated in this newsletter and with Hunter that this war was unwinnable from the Ukrainian side.

Ukraine couldnt handle Russia itself; America was never going to come to Ukraines rescue, and because Americas sanctions would backfire.

Hunter mentioned to me an interview on unz.com with Larry C. Johnson, an ex-CIA officer.

Larrys bio in itself is worth reading (bolds mine):

Larry C Johnson is a veteran of the CIA and the State Departments Office of Counter Terrorism. He is the founder and managing partner of BERG Associates, which was established in 1998. Larry provided training to the US Militarys Special Operations community for 24 years. He has been vilified by the right and the left, which means he must be doing something right. His analysis and commentary can be found at his blog, https://sonar21.com/.

Johnson ends his interview with this nugget:

Putins primary objective is to secure Russia from foreign threats and effect a divorce with the West. Russia has the physical resources to be an independent sovereign and is in the process of making that vision come true.

The rest is certainly worth reading.

After reading the entire written interview, things are worse than I thought.

And thats saying something!

Surely, You Cant Be Serious

And there are some specific reasons why Im calling time on US dollar hegemony.

Let me lay them out first:

Theres nothing the US, EU, and UK has that Russia needs.

Coca Cola, Harley Davidson, and Gucci bags are all nice-to-haves.

Dont get me wrong, Russias Instagram stars have been crying for weeks.

But there will be other avenues for them.

Theres nothing in Europe or North America that Russia absolutely needs.

And when I write, nothing, I mean nothing.

And Russia has all the raw materials it could ever need to continue to build, operate, and grow.

There are many things Russia has that the US and EU need.

This is where the English majors, as Dmitry Orlov calls them, have really miscalculated.

The US and France need Russian uranium for its nuclear power plants to operate.

Not want, but need.

Even if the US ramps up domestic production, it doesnt have the technology right now to enrich uranium.

Another example: remember how you were taught the US has the best oil in the world, light, sweet crude?

But you cant make diesel with it.

Europe will feel the sting of a diesel shortage, but measures to conserve fuel are being advised everywhere, including the U.S., as oil and gas reserves reach dangerously low levels.

On Friday, the International Energy Agency, a global energy watchdog, prescribed a set of strategies to cope with oil and gas shortages reminiscent of the steps taken during the 1970s oil crisis, including car-free Sundays and reduced speed limits on highways.

What about palladium for catalytic converters?What about cobalt, of which Russia is the worlds second largest exporter?You need cobalt to make rechargeable batteries.It is also the worlds second-largest supplier of vanadium, which is used in large-scale energy storage and in steelmaking.What about nickel for stainless steel and car batteries?Russia exports 10% of the world supply of nickel.After knowing this, would you want to fight these guys, or cut a very large peace/free trade deal?

The US, EU, and UK have proven themselves utterly untrustworthy as asset custodians.

When I teach operations graduates in banks what the primary responsibilities of an asset custodian are, I name four.You must keep assets:

If were going back to first principles, theyve clearly violated the sanctity of private property.

Sure, you may think the Russian oligarchs robbed their country blind.

But if the West felt that way, why didnt those governments seize those ill-gotten assets thirty years ago and return them to the Russian people?

Because the West just wanted the funds to earn enormous fees and loan out the assets as collateral.

Now the West has seized - daylight robbery, folks - those assets.

Why on earth would any Russian ever deposit another cent in a Western bank?

And for that matter, after Kanada proved how easy it was to freeze accounts, are you safe even if youre not Russian, but a citizen?

Thanks to stupid Western policy, the Chinas Belt and Road Initiative is now a must for the World Island. 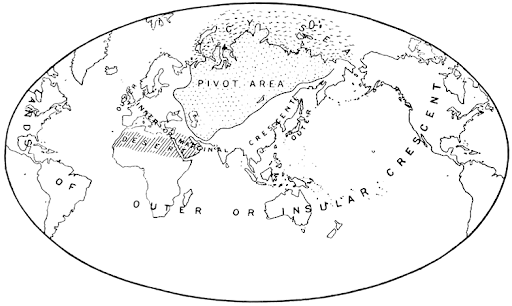 Why is Eastern Europe, and hence, Ukraine, so important?

Because its the only flat land route to invade Russia.

And thats what this is ultimately all about.

The Heartland itself is mostly Russia.

But now, because Kissinger and his idiots inadvertently pushed Russia into Chinas arms, now theyve got the heartland and a sea route out of it, if they need it.

One can argue the warming of the Arctic is the best thing that could happen to Russia.

Thats because theyll have their own sea routes and wont need Chinas ports.

By the way, feast your eyes on the map below: 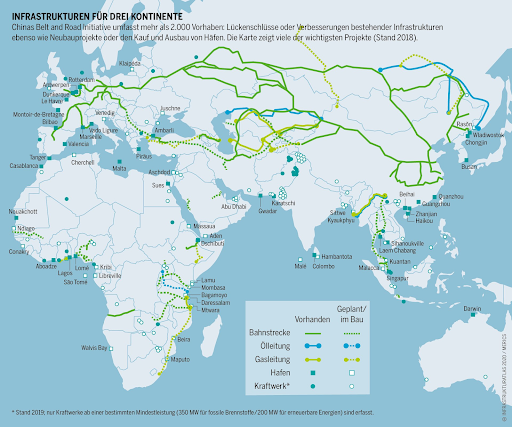 Thats Chinas Belt and Road Initiative, and it essentially obviates the need for an open water navy.

You know, what American taxpayers have been spending so much money on

Rail is faster and cheaper than water, if - and its a big if - they can get the whole thing off the ground.

Just look at that map as ask yourself one question:

If the Russians have all the resources they need, demand to be paid in rubles for them, and can rail them anywhere on this world continent, what on earth do they need US dollars for?

And thats the onion.

So when Vladimir Putin says, Pay me in rubles, its damn serious.

And its a smart move, as well.

If he still got paid in euros or dollars, hed have to redeposit those monies into Western banks.

That puts the money at risk of seizure.

So hes just eliminated that problem.

Now, the US, EU, and UK will have to buy rubles first, before they buy wheat, potash, gas, oil, palladium, nickel and other key minerals from Russia.

I cant overstate how disastrous this will be for the Western standard of living.

Theres no more petrodollar on which most Western consumers get a free ride.

Inflation was up well before this mess began.

Thanks to the government-mandated private sector shutdown, we had supply chain problems.

Now, we also have The Great Resignation to contend with, driving up labor costs for those remaining as workers.

But the final nail in the coffin of USD dominance is the lack of trust.

Those in DC who dont know about commodities, logistics, and supply chains took a gamble they shouldnt have.

Now the entire world knows confiscation is one arbitrary decision away.

Watch China, Russia, India, and Iran skirt the sanctions and build out a new monetary architecture.

All Hail the Yale Model!

David Swenson was onto something with his unique asset allocation. Most of the Yale Endowment is allocated to alternative investments. This may be the perfect model to emulate for...