Why Don’t Big Companies Seem to Care About Their Customers?

Good morning on this bright, sunny day.  It’s gorgeous here in the Phils, as I close in on my last few months of living here.

Rude reader Zeke sent a great email that I’ve finally got around to writing about.  He writes:

...my business has always centered around “the customer is right,” and we have done well. But something (probably many things) has broken that causal chain. Many corporations seem to be unaffected and unworried about a better product, good service, or happy customer.

It may be the huge number of customers that don’t buy quality, only price. In other words, the customers’ failure to demand.

But it also seems to have something to do with the huge amount of debt and easy money.

I think Zeke’s hit on something fundamentally wrong with the way we - both customer and company - treat each other nowadays.

I don’t pretend this will be exhaustive or even conclusive, but we’ll give it a go anyway.

When I was a futures broker about 20 years ago, I sat across from the interest rate salespeople.

The interest rate sales desk is where the bank talks to hedge fund managers and other institutional clients about their swaps needs.

Swaps are derivatives that allow investors to exchange fixed cashflows for floating cashflows and vice versa.

It makes sense in fixed income to talk about basis points as yields don’t move that far daily.

Ollie, still a good friend of mine, as I followed him into teaching, is a former trader who moved into sales.

That’s a common trend, as many traders tire of the game and decide to talk about the game instead.

Ollie is a brilliant guy, having done his Ph.D. at Cambridge in quantitative finance.  He didn’t have his Ph.D. then, but he was super bright all the same.

I remember the day Ollie resigned.  As a young guy, it disproportionately shocked me when someone left the firm.  I couldn’t understand why they were going.

So I asked Ollie why he was leaving, and I never forgot his response.

“No matter how well I cover them, if someone else gives them a better price, they trade away.”

“Trading away” means the clients execute the trade with another bank.

From the Customer Side

Before bashing big companies, let us first look in the mirror and see if customers are part of this problem.

Price matters far more to American customers than quality.  I know Americans want only the best, but I think that goes by the wayside in many ways.

For instance, Europeans are far happier to pay a higher price if it means keeping the local butcher in business.  Most of Europe still has a Main Street where it’s not all chains.

I loved that about Europe.

I remember when my parents moved to Texas.  Their subdivision was all houses, no small businesses.  If I can’t walk to my local grocer, I’m just not happy anymore.

But it’s not just a matter of continental preference.

It seems anytime an industry has been commoditized, price trumps all other concerns.  This includes interest rate sales in banks.

Local brick and mortar businesses, such as bookstores, butcher shops, and bakeries, all suffer from super- and hypermarket encroachment, as well.

2. Customers are not always civil to those people servicing them.

I’ve noticed this over the years.  A barista is not a slave.  It’s a person who makes your coffee.  There’s no need to be nasty to them when they spell your name wrong.

I get John, Shawn, Shaun, and the occasional Dawn on my coffee cup.  Who gives a toss?

It’s absolutely fine to demand you get what you paid for.

I don’t think it’s fine to crush a company review-wise because their coffee isn’t to your liking.  It’s OK to criticize, but keep things proportional. 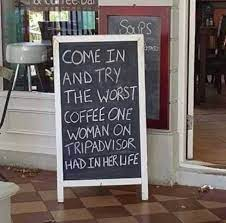 From the Company Side

And now, let’s look at how companies don’t live up to expectations.

They are: Do all you have agreed to do.  Do not encroach on other persons or their property.

These are straightforward rules that companies sometimes forget about.

First, they bait and switch all day long.  Free products are now not free.  I know it’s a business model drug dealers use to their benefit, but either charge or don’t charge.  I don’t use a popular invoicing tool because of this.

“We’ll never charge” became “We’ve had a change of management, and they’re charging.”

I went to another platform that does charge.  In fact, they charge more.  But they never lied to me.

Second, and this is especially true with Big Tech, they constantly invade your privacy, which is your property.

Putting terms in fine print and then claiming to have alerted their customers to the latest privacy invasion is tosh.

I left Facebook for many reasons.  This was one of them.

2. They occasionally actively harm their customers.

Facebook Inc. knows, in acute detail, that its platforms are riddled with flaws that cause harm, often in ways only the company fully understands. That is the central finding of a Wall Street Journal series, based on a review of internal Facebook documents, including research reports, online employee discussions, and drafts of presentations to senior management.

Time and again, the documents show, Facebook’s researchers have identified the platform’s ill effects. Time and again, despite congressional hearings, its own pledges, and numerous media exposés, the company didn’t fix them. The documents offer perhaps the clearest picture thus far of how broadly Facebook’s problems are known inside the company, up to the chief executive himself.

Sure, they renamed the company Metaverse because of a strategy change.  Sure...

You just don’t pay for mistakes the way you used to.  There’s no doubt that companies have experimented with things they wouldn’t have gotten away with had rates been higher.

Disney is a chief offender here.  No, Captain Marvel is not “one of the most popular characters we have.”  Actually, Marvel relaunched that character numerous times because no one cared about her.

If Disney weren’t rolling the dice, we would’ve had Iron Man IV a long time ago, and Captain America would still be Steve Rogers.

Fisher’s unfortunate death, coupled with Ford’s demand to kill off Han Solo, deprived a generation of the only reunion it ever cared about and damaged Star Wars’ intellectual property and brand in ways from which it may never recover.

Statista published this chart a few weeks ago: 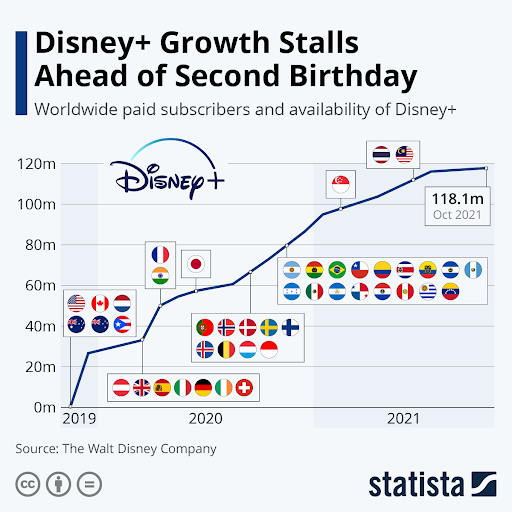 Yes, when you can borrow unlimited amounts and have (had) strong momentum, you can do idiotic things.

It looks like time may be running out on them, however.

The problem lies on both sides here.  But until both customers and companies realize how much they need each other and the Fed stops printing, we’ll remain in this boat.

Thanks again to Zeke for the stimulating email.

Why I Copped It on the Jab

I took my first AstraZeneca jab yesterday. No, I dont think itll do much. And no, Im certainly not going to tell you to do it.Happy Hump Day, my...