It's a gloriously chilly morning here in Asti.

Good friend and Rude reader Andy is getting on a plane heading back to England.

Then he's off to Gibraltar to find new lodgings.

I will miss my friend, but my liver will have time to rest before Aussie Trav and Boston Marty get here in three weeks.

They’ll arrive in the middle of truffle season.  Here in il Piemonte, especially in Alba, the white truffle is a naturally-occurring delicacy that can fetch thousands of dollars.

Shaved onto spaghetti, it’s a delicious, if expensive, treat.

Since the euro continues to fall out of bed, the truffles will be more expensive for those who earn in euros.

Luckily, I get paid in dollars.

With that said, the almighty dollar is crushing all in its path, thanks to Jay Powell’s reckless and relentless hiking cycle.

In today’s Rude, I’m going to walk through the markets with you, showing how they’re interconnected.

Hopefully, the world will make a bit more sense after this cup of coffee.

But before we get into it, I want you to keep this in mind:

As the world’s de facto central bank, printer of the world’s reserve currency, and banker to the world’s most bloated military, the Federal Reserve has a reach no one could have predicted or genuinely wanted.

But what the Fed says goes, and it’s given birth to an entire subindustry of Fed watchers.

As you well know, I think Jay Powell has gone nuts. 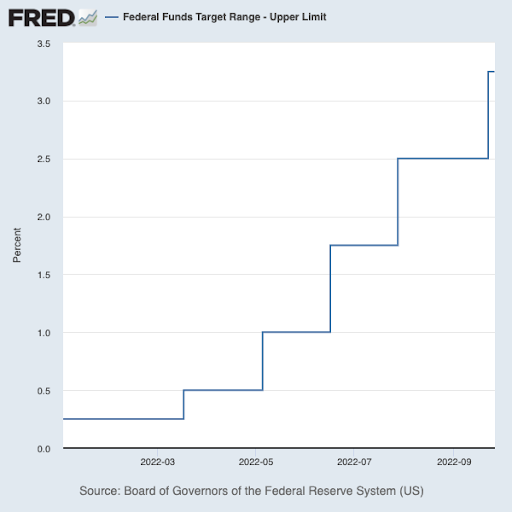 In January, the upper bound on the Fed funds target range was 0.25%.

I don’t think Jay Powell or the FOMC do math well.

Raising rates at that frequency with that steepness is bound to be disastrous.

Now, let’s connect the toe bone to the foot bone.

Money market instruments are financial instruments born with a life of less than one year.

These include treasury bills, commercial paper, repurchase agreements, eurodollars, and certificates of deposit.

Short-term finance is supposed to be boring…

But as the base rate increases, money market rates will also increase, lowering the value of money market instruments.

Not only that, but this is where credit card rates start to increase dramatically.

If lenders match the Fed’s latest rate hike, the national average card APR could climb as high as 18.91 percent this fall.

Ok, time to connect the foot bone to the heel bone.

I’ve been howling about the US Dollar Index for a while now. 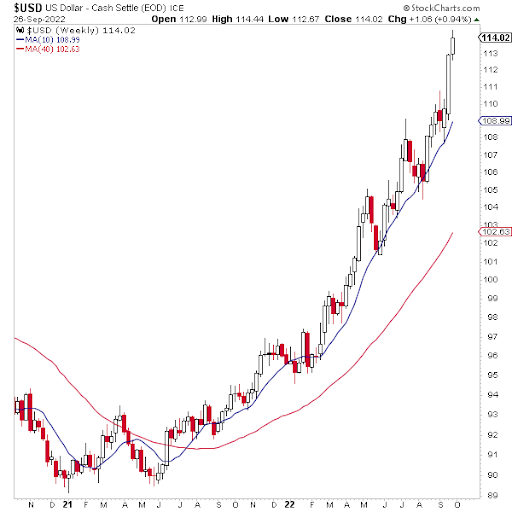 Creditors worry that countries will try to print their way out of their debt (Argentina, for example).

But if a country’s or foreign company’s interest and principal payments are in USD, and the USD is soaring against their home currency (assuming that’s where most of their revenue comes from), then those foreign entities won’t be able to pay their debts anyway.

Also, if the dollar soars, the number of dollars needed to purchase US stocks or USD-priced commodities is reduced.  Hence, prices fall.

But we’ll talk about stocks and commodities later.

We’ve got bigger fish to fry. 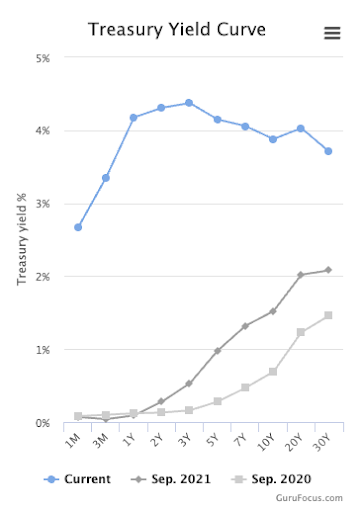 Most of the current yield curve is inverted, which isn’t a good sign.

But the 3-month yield is lower than the 30-year yield, so that’s ok.

Why?  Because banks typically borrow in the money markets for three months and then loan out 30 years for mortgages.

If that part of the curve inverts, we’re likely in another financial crisis.

What’s also noteworthy on this chart is how rates are much higher across the curve in 2022 than in previous years.

That means every cash flow is discounted at a higher rate, lowering the present value of those cash flows.

In short, as bond yields have spiked, bond prices have cratered. 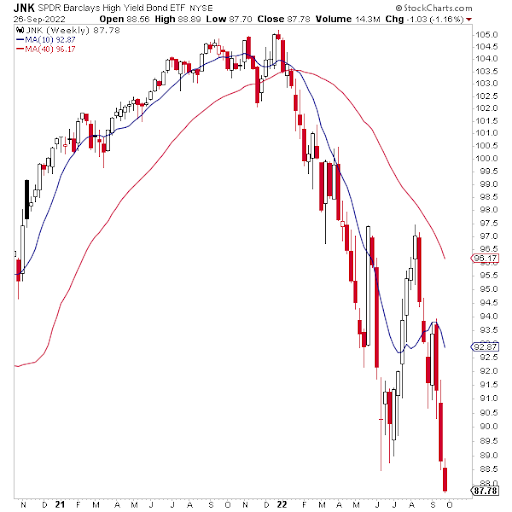 But thanks to the steep rate hikes, the TLT long treasury ETF has been hurt worse! 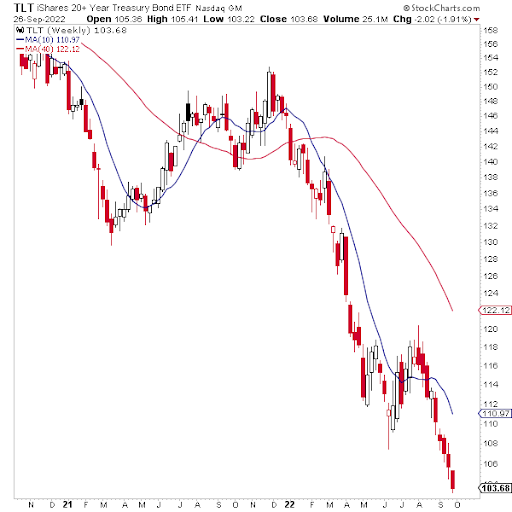 Now let’s connect the ankle bone to the leg bone.

A higher carrying cost means commodity prices must come down.

Even oil and natural gas have taken their lumps in recent weeks. 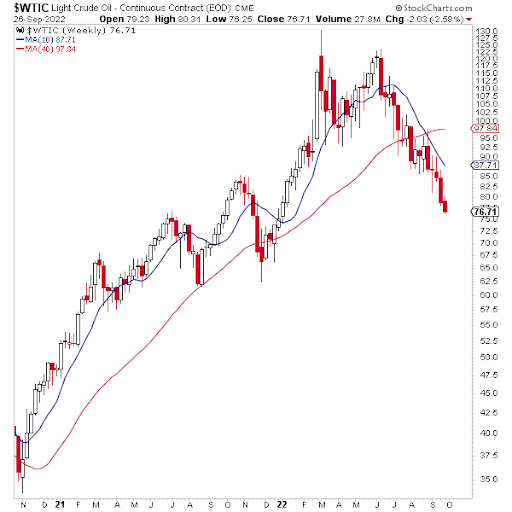 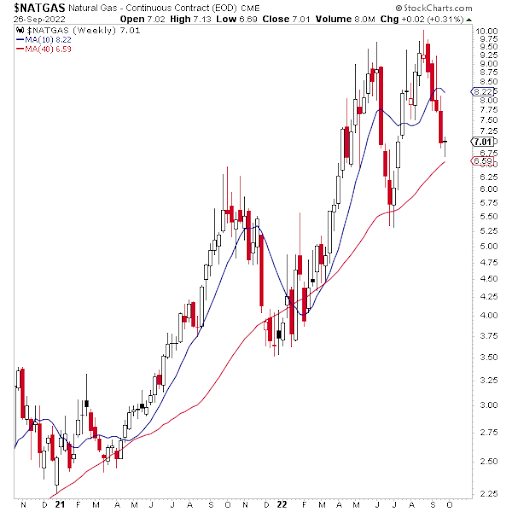 And gold?  Gold isn’t protecting anyone now that it costs more to own it. 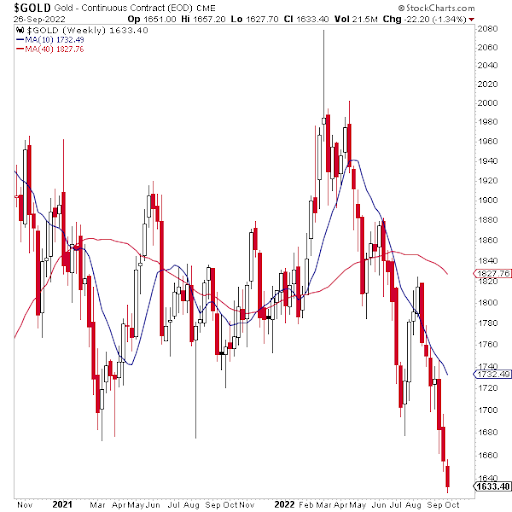 And now, the leg bone connects to the body.

The SPX is ugly. 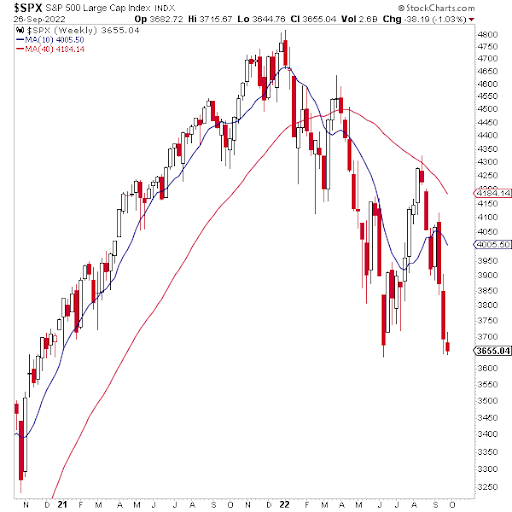 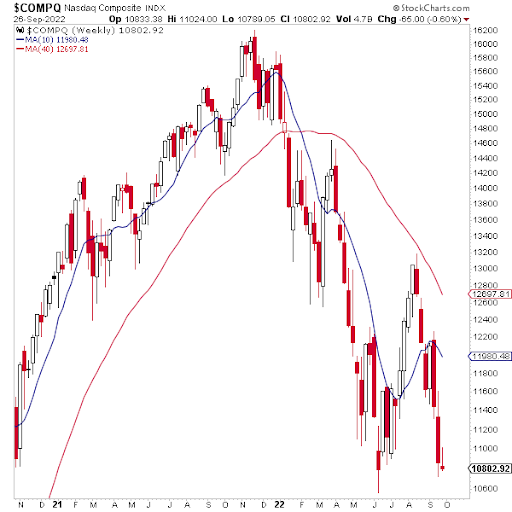 And the Dow is ugliest, just entering a bear market and making new lows. 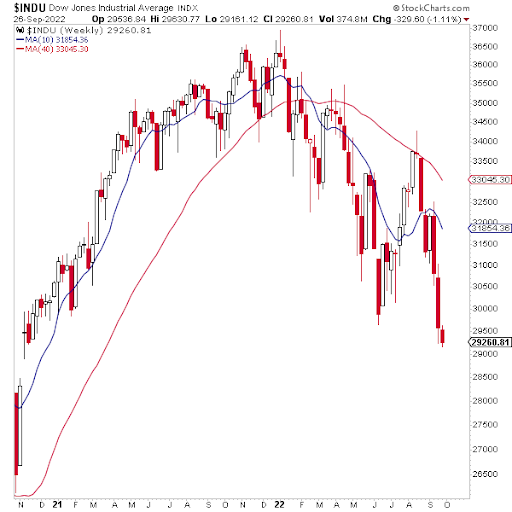 But we were warned.

All other markets, which underlie the equity market, are crying “UNCLE!”

We’re going lower from here, according to the charts.

But you don’t want to fight Jay Powell and the FOMC anyway.

It’s time we all believe him.

I hope you enjoyed our little jaunt through the markets.

From Jay Powell’s rate hikes through to the equity markets, it’s critical to understand how markets are interconnected and interdependent.

And it makes life a bit richer, along with your wallet.

It’s evident that Jay Powell should be put in a straitjacket, and his shrink should work out his savior complex.

It’s too much, too late, and he’ll break this market for years.