It’s that time of the week.

As I’m wont to do, I started early, cracking open a few Menabreas yesterday.

Those are beers made in the north of Piedmont, near the Alps.

The vino rosso will follow tonight - as I hope it does for you.

But before we get there, a cautionary tale.

In the Rude, we talk about things that increase your sovereignty.

Second passports, online businesses, a bit of crypto, and good health are our pillars of financial freedom.

Today, we will see what happens when an entire region has lost its sovereignty.

This region no longer controls its destiny.

It’s reduced to getting swept with the currents of world events, having little to no influence over them.

This was done by choice.  And it was poorly done indeed.

The region I speak of is the European Union, which has ceded its sovereignty to a foreign “protector,” the United States.

A veritable Olympics’ worth of poor decisions will haunt Europe for decades, as it grapples with market forces that have parted the foolish Europeans from their money.

Let’s look at some of these asinine decisions and how they’re leading Europe down the road to ruin.

This left billions in income and assets in the hands of the Russian state to redistribute to Russian business owners.

It’s quite possibly the dumbest thing I’ve seen in a long time.  I anxiously await the lawsuits that will surely come from this government-forced move.

Luckily, not all companies have acted as stupidly as their virtue-signaling leaders.

Quartz provided this list, probably to shame these companies into leaving Russia.

I, myself, am going to buy more from them.

Of course, a ludicrous paper written by Jeffrey Sonnenberg of the Yale School of Management purports to show how companies that left Russia have fared better than companies that stayed.

I point to this table, alleging that companies that suffered asset write-downs have made far more equity gains.

As if Exxon has rallied because it left Russia!

How about the fact it’s an oil company, and its underlying commodity has roofed it, thanks to the sanctions?

Of course, if you remove Exxon, Sonnenberg’s thesis gets binned.

And speaking of energy…

Europe Slowly Cuts Russian Energy Supplies, Only For Russia to Speed Up the Process

Guess what Europeans are getting in their Christmas stockings this year?

No, really, they’re getting coal.

Imagine being so stupidly green, you’ve got to use coal to heat your home.

Talk about the ice water of reality splashing you in the face.

Anyone with a brain - and outside of Brussels - knew the Russians weren’t just going to let the EU “wind down” its dependence on Russian energy.

Once the inevitable was plain, Moscow took the liberty of speeding up the process.

And now, Europe is left with a silly choice: freeze and shut down its industry or turn on the coal-fired plants.

German Economy Minister Robert Habeck has described the government’s decision to limit the use of natural gas and burn more coal as a “bitter” one but said the country must do everything it can to store as much gas as possible ahead of winter.

“The gas storage tanks must be full in winter. That has top priority,” Habeck said in a statement, according to a translation.

The Netherlands on Monday said it would activate an “early warning” phase of an energy crisis plan and remove a production cap at coal-fired plants to preserve gas, according to Reuters.

Well, at least South Africa is making out: 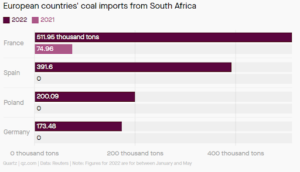 It’s a complete loss of sovereignty.  These politicians are now making decisions based on the bad choices they made before.

As for Russia, she isn’t suffering all that much.

Here are the salient facts:

Chinese imports of Russian crude surged by 55 percent in May as the world’s biggest importer of oil took advantage of major discounts.

Russia is also estimated to have overtaken Saudi Arabia to become India's second-largest supplier of crude oil in May. The average daily rate of Russian oil exports to India stood at 819,000 barrels last month, compared with 277,000 BPD in April.

It’s not all roses. Paraskova notes that it’s unlikely that the Asian market can absorb all 4 million barrels going to Europe.

But it’s far better than most in the West will admit.

Europe’s Economy is Already Down the Tubes

I tell graduate students that if you want one score that will tell you a great deal about a place, look at the exchange rate.  Here’s the EURUSD: 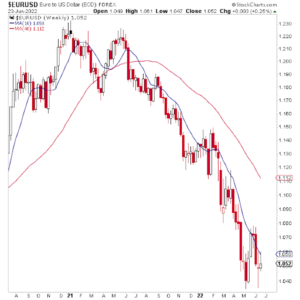 Since the beginning of 2021, the EUR has tanked versus the dollar.

So it was terrible going into the Russia-Ukraine war and has gotten much worse.

My paisano Mark Rossano, the Sherlock of the Supply Chain, expects the EURUSD to fall below parity relatively quickly.

I’m forced to agree with him. That’s why I’m trying not to move too many euros to Italy yet. 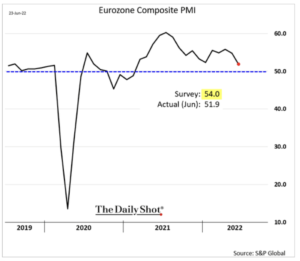 European consumer confidence is also taking a huge hit, the biggest since the debt crisis in 2011: 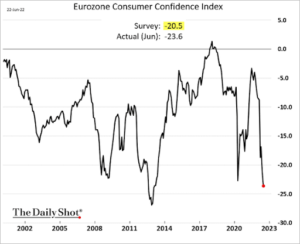 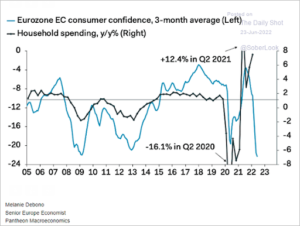 If you think that’s ugly, you should see France, Germany, Italy, and the Netherlands’ underlying indexes.

And the unelected bureaucrats in Brussels are running the place into the ground.

The EU’s Russia policy is wrong from first principles and needs an urgent rethink.

That will probably happen over a frozen winter, when people die from the cold.

Once that happens, the Atlanticists will have a much tougher time arguing with the admittedly few Europeans arguing for an independent European policy.

All in all, this is a cautionary tale about an entire continent losing control of its destiny because of bad decisions, a lack of independence, and a misguided view of how the world works.

Well, some people just have to learn the hard way.

Russian Gold Cheap For Its Friends, Banned For Its Enemies

At the behest of POTUS, the G7 banned imports of Russian gold. Since China and India arent in the G7, theyll fill their boots. With the western gold markets...