As I was driving from Newark Airport to the Big Apple, I noticed whoever put Hudson Yards up has blocked the view of the Empire State Building from the Jersey side.

As you spin down to the Lincoln Tunnel entrance, you used to get a perfect view of the Empire State Building, right across the Hudson.

Seriously, the whole place has fallen apart since I left on that fateful October 3rd of 1999.

Still, it’s ok to be back.  I’ve not been to the US for three-and-a-half years.

NYC’s vibe is much different from the days I’d frolicked around in the late 90s.

Heck, Rudy made the place so safe I could keep my wallet in my back pocket.

This time, I left my Rolex at home in favor of my Apple watch.

No one is going to steal one of those

I’m teaching here for the next month, and I’m trying to get enthusiastic about it.

Not that teaching isn’t fun.

It’s just that we’re in the midst of a mess - and now the banks have fallen headlong into it.

Bank Earnings Have Been Pummeled

Get a load of these numbers:

Clearly, this isn’t an isolated happening.

It’s not a Credit Suisse-like tragedy of errors.

This is a sector-wide whooping.

And there are some compelling reasons for it.

Why Is This Happening?

First, let’s have a look at the year-to-date returns on our Big six banks: 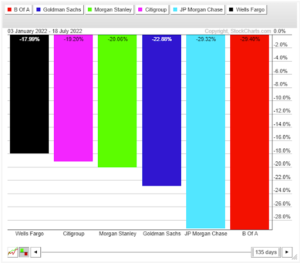 No, those aren’t the latest crypto results.

Though you can be forgiven for thinking so.

Really, this has been going on since the market started turning down in November 2021.

I don’t care what the mainstream economists write about inflation calming down.

If your wholesale prices are going up that fast, some of that will get passed onto the consumer.

As the CPI was “only” 9.1% year-on-year, that means producers are currently shielding consumers from some of that inflation.

That means more consumer price increases may come down the pike.

The inflation story isn’t over yet.

Jay Powell’s Fed has hiked rates 75 bps in June and is set for another 75-bp hike next week.

I think this next rate rise will break the camel’s back.

The US economy can’t take much more medicine so quickly.

Usually, banks profit from a widening of the net interest margin.

That’s the difference between what they pay you in interest and what they make on their loans.

But this time, that widening isn’t enough to compensate for the lost investment banking revenue.

And that’s because companies are thinking twice about going public or financing deals.

US consumers are burning through their savings because of the inflation in the system.

But as the Fed raises rates, the USD keeps going up.

That means foreign consumers are finding it increasingly difficult to purchase US goods and services.

Volatility is increasing in the system.

That’s the one thing the banks were happy about: their trading revenues.

Traders had a field day this year, as volatility leads to profitability.

But investment bankers find the opposite: all this volatility and uncertainty wrecks the plans of company executives.

If executives don’t grasp what may come, they put off lucrative deals like initial public offerings, secondary offerings, and debt issuances.

Stock underwriting, meanwhile, has gone dormant. The total value of U.S. initial public offerings was below $4 billion in the second quarter, down 97% from the record high in the first quarter of 2021. IPOs might not resume in earnest until business leaders have better insights on the outlook for inflation and economic growth. 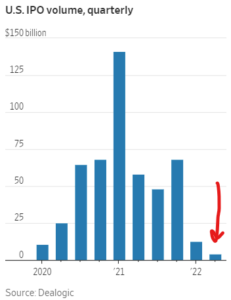 Sometimes, it takes the big guys to get hurt to see what’s truly going on.

There’s no way Powell sat in the Eccles Building, watching bank earnings come out, thinking, “This is all going according to plan.”

How the big guys react to the Fed’s impending hike will dictate the Fed’s course for the rest of the year.

Joke Biden’s approval ratings are in the basement. The Dems can’t prep Kamala because she’s completely incompetent and unlikeable. Who can the Dems turn to in 2024?  You guessed it! Happy Friday! I hope...