Take The Oil But Not the Golf!

Happy Hump Day!Sometimes, you can just hear your parents across the oceans.In this case, Philosopher/Truck Driver John Ring is buzzing in my head this morning.Ive written of his utter disdain for hypocrisy many a time.But this sorry episode may take the cake.Im not a golf fan.I tried. I really did.I even took lessons in Regents Park one time, as my boss wanted me to get clients on the links.But it didnt take.I may have traveled the world and acquired a good education, but Im a beer and contact sports guy.Sure, I drink loads of wine and consume my body weight in moldy cheese, but things like chess, golf, and opera elude me.But today, Ill step up to defend a few former Number One golfers.The press, with a wink from the PGA Tour, Im sure, is making them responsible for supporting the Saudi regime.

Mark Twain once called golf a good walk spoiled.John Feinstein wrote a sports classic with that as the title. 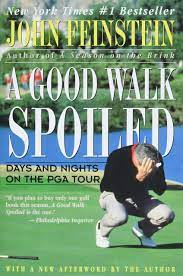 I never read the book because I immediately agreed with the title.My grandfather golfed every Saturday during his early retirement years.My college roommate was Number One on his high school golf team.Im sorry. Its a game, not a sport.In baseball, a batter swings a round bat at a round ball, traveling at him more than 90 to 100 mph.In cricket, a batsman swings a flat willow at a round ball that often travels faster but bounces before it gets to him while he defends his wicket.(Its one strike and youre out in cricket.)Those are sports. They require athletes.Golf does not.With that said, if the market is happy to pay these guys millions of dollars to play this game, its fine by me.The same goes for all these e-sports. And those kids sit on the couch while they play!In any event, we find ourselves in the odd position where golf and geopolitics synthetically collide, thanks to some nefarious reporting.Its time to take a dump on the legacy media.

Ok, crickets boring as hell, too.Its a five-day Test where most people read The Daily Telegraph, get playfully pissed and, since theyre British, get terribly sunburned in the stands.Playfully pissed in British English is slightly drunk in American English.So boring were these Test matches (always with a capital T) that cricket was losing fans in droves.Its important to note the game was invented in the late 1600s when no one had anything else to do.And its popularity soared throughout the Empire when no one had anything else to do.Modern audiences wanted shorter games, so different forms of cricket were invented.I wont bore you with the details, but Twenty20 cricket lasts about as long as an average baseball game and is wildly popular.Now there are Twenty20 leagues worldwide, but most notably in England, India, and Australia.I mention all this because America is as rigid as can be about its sports and leagues.And the PGA Tour is about as bland and rigid as it gets.So the Saudi princes, backed by their sovereign wealth fund, decided to shake up golf.

Whats the Uproar About?

The Saudis formed a new golf superleague to compete with the PGA Tour.Theyve allegedly paid Dustin Johnson about $150 million to join the league.Again, Im not a golf expert. Many writers may be entirely correct in pointing out how golfs history matters.If thats the case, LIV Golf - the new league - will collapse under its own weight.But since the new league is backed with mountains of Saudi money, the press has had a field day with these golfers.Its as if these golfers ordered Jamal Khashoggis assassination themselves.The virtue signallers, who doubtless get around London using Saudi petrol-fueled cars, are out in full force.Jamie Weir of Sky Sports is typical of the virtue signalers in the UK. Heres what he had to say:

"Let's be clear; there's one motive and one motive alone for these players choosing to play the LIV Series and burn their bridges with the PGA Tour: Money. When I put it to them that surely it wasn't remotely about any revolutionary format, but first and foremost about the eye-watering sums of cold hard cash on offer, they did eventually admit that that was their motivation.

How, though, McDowell was asked, is that journey helping women who are oppressed in Saudi Arabia, the LGBTQ individuals whose rights to live freely are criminalized, the migrant workers whose rights are violated, the victims of the Saudi-led bombing of Yemen, or the 81 men who were executed by the kingdom in March?

"I wish I had the ability to be able to have that conversation with you," McDowell said. "As golfers, if we tried to cure geopolitical situations in every country in the world that we play golf in, we wouldn't play a lot of golf. It's a really hard question to answer.

The Wall Street Journals coverage was a bit more nuanced

And at least my fellow Journal readers havent all lost their minds:

People like Weir have no awareness. Just over two months ago, Politico ran this piece:

No tough questions then, were there?

But it gets better

Biden Flies to Saudi to Beg For Increased Oil Output

Joke Biden, whose idiotic policies have paralyzed his European vassal states and Americas economies, will allegedly fly to Saudi to beg MBS to open up the oil spigots.

From the Financial Times:

As a candidate, Biden had vowed to treat the kingdom as a pariah amid mounting evidence Saudi officials were behind the 2018 murder of dissident Jamal Khashoggi; within a month in office, Biden had declassified US intelligence pointing to Crown Prince Mohammed bin Salman, the countrys de facto leader, as having been behind the killing.

But amid skyrocketing oil prices and record inflation at home, the US president who had once characterised the battle between democracies and autocracies as the central guiding principle of his foreign policy has been forced into a sharp U-turn.

Biden is now expected to meet Crown Prince Mohammed in person during a visit to Riyadh later this month, a climbdown facilitated by a furious, senior-level diplomatic offensive by the presidents top Middle East adviser and energy adviser.

On Tuesday, the White House was able to show the first fruits of the policy reversal: Opec agreed to accelerate oil production to help replace output lost to international sanctions against Russia, and Riyadh helped extend a truce between Yemens Saudi-backed government and Houthi rebels.

As I've said, the president will meet with any leader if it serves the interests of the American people. That's what he puts first. He believes engagement with Saudi leaders clearly meets that test, as has every president before him.

Well, if Sleepy Joe thinks that, who are those golfers to disagree?

Watching sportscasters paint these golfers as supporting terrorism is ludicrous.To be fair, they could have handled the questions better.I would have responded, If Americans import Saudi crude every day, thats good enough for me.Or When the UK, US, and France blew up Libya, I was distraught. But I play golf in those countries, so I kept quiet.Or If Boorish Johnson and Joke Biden want better relations with the Saudis, Im here to help.But my favorite would have been, Look. Theyre paying me in the same USD Americans paid them to fill their gas guzzlers. Im now repatriating the USD back to America to pay my citizenship-based taxation. So Im a real patriot!Until tomorrow.All the best,Sean

Your Get Out of Jail Free Card

A second passport gets you out of jail and opens up possibilities. Whether its through ancestry, marriage, or investment, getting one is worth it. Lets review the ways you...