Still Dealing With This Afghanistan Mess

Halfway there, although its been a ludicrous week politically anyway.

Lazy Joe just left blood, treasure, and a truckload of weapons at the Talibans disposal. Its a mess and will probably damage whatever authority Biden thought he had for the rest of his time in office.

No, Joe, You Were Not Beholden to The Deal

I realize all presidents blame their predecessors for their misfortunes, especially self-authored ones.

But Biden blaming Trump for this botched pullout is especially sad.

When I came to office, I inherited a deal cut by my predecessorwhich he invited the Taliban to discuss at Camp David on the eve of 9/11 of 2019that left the Taliban in the strongest position militarily since 2001 and imposed a May 1, 2021 deadline on U.S. forces.

Therefore, when I became President, I faced a choice follow through on the deal, with a brief extension to get our forces and our allies forces out safely, or ramp up our presence and send more American troops to fight once again in another countrys civil conflict.

Since the Senate didnt ratify Trumps deal, Biden was not legally, morally, or ethically tied to it. Full stop.But lets back up for a minute. Whenever its suited Crazy Joe, hes been more than happy to reverse Trumps policies anyway.On his very first day in office, he led America back into the money-wasting, useless Paris Accord, a climate deal so bad it gives China and India ten year passes for non-compliance.Theyre signatories but not beholden to the actual script until 2030.Biden also waived the sanctions on Iran so he could renegotiate with them on the Obama-era nuclear deal.Biden reversed Trumps transgender ban in the military.Biden scrapped the Mexico City protocols so the USG could give money to NGOs promoting abortion around the world.Lets not get into Bidens other disaster: the US border with Mexico.Other than dumping this mess in his predecessors lap, Im not sure what Old Joe is talking about. Neither is he, probably.

Ok, Hotshot, What Was Great About Trumps Deal?

The deal itself is simple, but it kind of sets off this cascade of other things which are not so simple. But the deal basically says the Taliban won't kill any Americans, and we won't attack the Taliban. And if all goes well and the Taliban agree not to support any kind of terrorism against the United States or not to allow terrorists in the country or any kind of bases, the United States will leave and go to zero and take out all of its forces by May 1.

And so at the present moment today, the U.S. has about 2,500 troops there, and then there's about 5,000 other NATO European troops who are there but who are kind of waiting on the U.S. to make a decision. So there's about 7,500 troops in the country right now.

Now Im going to make a leaping inference: I suggest that Trump wouldve withdrawn all the troops and all the weaponry, too.

Because thats precisely what didnt happen over the past two days.

Bradley Bowman, a former Black Hawk pilot who served in Afghanistan and has sharply criticized the U.S. withdrawal, told Defense News, theres no doubt that theyve captured hundreds of Humvees and artillery and other equipment and aircraft.

Twitter has outdone itself with all the pictures those friendly Taliban uploaded for our perusal. Ive included some below.

Now that the Taliban have complete control over Afghanistan, its the new, proud owner of the Afghan Air Force.

Bully for them; you paid for it!

More from Defense News: Now, with Afghanistan under Taliban control, the question is no longer whether the organization will gain access to the Afghan air forces inventory of U.S.-provided planes and helicopters, but what it plans to do with them and what the U.S. military can do in response. 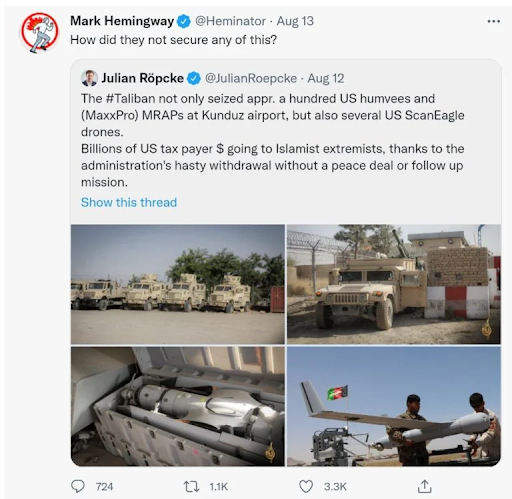 If we do that now, then I could see the Taliban changing its disposition toward the evacuation operations in Kabul. So get all the Americans out, do as best as we can getting our Afghan partners out

Once thats done then why the heck wouldnt we destroy every rotary-wing and fixed aircraft that the Taliban has captured? I think we absolutely should.

The Afghan air force operated 23 A-29 attack planes, four C-130 cargo planes, and a total of 33 militarized versions of the Cessna Caravan, some of which were configured for a light attack mission, according to the special inspector report.

It also flew about 150 helicopters, which included the American-made UH-60 Black Hawk utility helicopter and armed MD-530s, as well as the Soviet Mi-17.

So lets agree on this: Trump never wouldve left all that equipment on the ground.

Biden, a lifelong politician, and his swamp bureaucrats have no regard for the cost and implications of giving away these arms to unabashed terrorists.

Ive had some interesting conversations over the past 24 hours on social media.

Heres an important point. Except for the most ardent and stubborn neocons, I dont think anyone thinks we ever shouldve been in Afghanistan. Most sensible folks wanted out of there decades ago.

So taking We botched the pullout as a sign that the US should stay is idiotic.

For Biden supporters - or, more accurately, Never Trumpers - this is a great time for a potshot at the former president. But theyre incorrect on the facts and morally wrong.

For Trump supporters, the evidence continues to pile up that Joe Biden was an awful choice in the 2020 election.

Yesterday, Mark Steyn wrote, As for the enemy, the good news is that if your regime is attacked by America, you'll likely wind up with even more territory than you started with.

That quote is a staggering indictment of the idiocy running rampant in Washington, DC right now. The place has never been where the best and brightest wind up, but now its undoubtedly attracting only those with a devious ability to climb the greasy pole.

In the meantime, thoughts and prayers go out to the 15,000 American citizens stuck in Kabul. May they get home safely, with or without the USGs help. 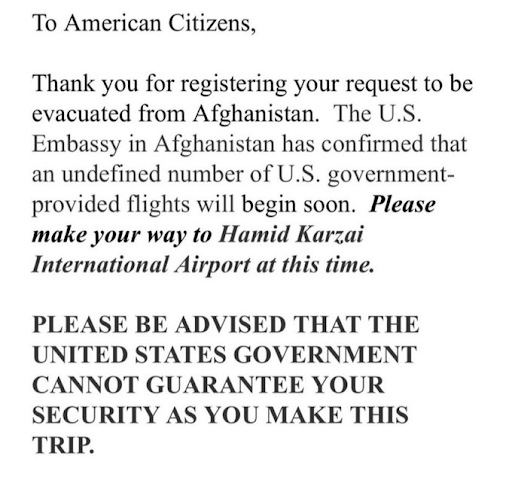 In the meantime, have a great day.

It’s Thursday, and we’re nearly there. Today, I’m going to write to… me.  I can’t proclaim to be in control of this subject, so what I’ll do is let you in...