Sloppy Joe Had Some Documents of His Own

Good morning from a cold but crystal-clear Asti.

The one huge advantage of wintry weather is that it encourages industry. I read much more in the cold months than in the warm ones.

In Asia, this was problematic, as the weather rarely changed. But here, in my first full winter in nearly 15 years, it’s been a breeze to devour some good books.

I promise to review some as the season stretches on.

But today, I had a good laugh.

Joke Biden was caught doing something he shouldn’t have done, just as Donald Trump was.

But of course, he’s not taking anywhere near the heat Trump did for it.

Both men probably would’ve been fired if this were a private business.

But there will be no cost to pay in the weird and wacky world of politics. As usual.

The Importance of Confidentiality

I'll never forget when I was asked to short the treasury features markets at 06:30 in the morning London time.

I had just arrived at the office. It was a dark, cold, and miserable day.

I was about to sit at my desk to transfer the orders from our Tokyo and Sydney offices to the London Book.

My phone rang. On the dealer board, “DUQE” lit up. That was Duquesne.

Duquesne was Stanley Druckenmiller's old fund. I had never talked to Druckenmiller directly, but I used to deal with his execution desk. And on that desk, there was a guy named S.

Before I executed the order, I said, “S, you know, there's no liquidity in the market right now.”

The market tanked one entire point in about one microsecond.

I said, “Filled! S, you sold 2,000 10-year futures at market. I will send you a spreadsheet with the fills as soon as I get them. Thank you very much.”

About 10 minutes later, the rest of the dealer board lit up, and I knew something was up.

I hit “TUDR” who was Tudor, also one of my hedge fund clients at the time.

“What the hell happened in the 10-year?”

You see, I'm not allowed to say what exactly happened because that would violate client confidentiality.

But I can make up a plausible story.

And as Duquesne was in Pittsburgh, I was technically lying and keeping that information confidential.

And Tudor hung up the phone… and about five more clients asked, “What happened?”

That’s because you don't see one full point moves overnight.

What Duquesne was trying to do was to set off everyone's stops, and they succeeded fantastically.

Later that day, my managing director from New York called me and said, “Who did you tell?”

I incredulously answered, “K, I know the rules of the game. I've been playing it long enough. I didn't tell anybody anything about that order other than institutional selling out of New York. That's it.”

“Yeah, well, I didn't. Tell them. And check the f@$&ing tapes and the chat board. Goodbye.”

And I hung up the phone, annoyed.

We found out that Duquesne had split the order and had actually sold 4,000 treasury futures at market.

The other broker who worked the order simultaneously was Merrill Lynch. The young idiot blabbed to everybody. He was fired by the close of business that day.

Confidentiality matters in business. I'm not sure why it doesn't matter so much in government.

This is dumb enough on its own.

Presidents shouldn’t carry anything confidential or top secret out of the White House. Period.

I don’t include Dick Cheney in that list because it would’ve been fruitless; he was the de facto president in the Noughties.

What annoys me more is that these documents were allegedly discovered in November, but they waited to make this public until Trump’s dirty Mar-a-Lago laundry was fully aired.

That means Team Biden once again was guilty of doing something Trump did… far before Trump actually did it.

Biden was Vice President at the time, so his classified documents were missing years before Trump’s were.

Of course, this is nothing new.

Remember when Trump was impeached for something Biden admitted to doing as Vice President? 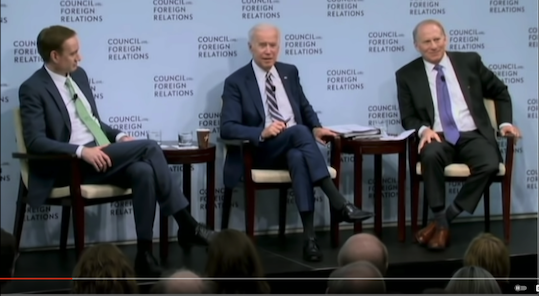 What To Do, Merrick Garland?

Remember how USAG Merrick Garland, still pissed off about not being on the SCOTUS, ramped up the rhetoric about Mar-a-Lago’s treasure trove of documents?

Now, what’s he going to do?

Nothing, almost certainly. And that makes him look ridiculous.

According to CBS News, via Zero Hedge:

The classified material was identified by personal attorneys for Mr. Biden on Nov. 2, the day before the midterm elections, Richard Sauber, special counsel to the president confirmed. The documents were discovered when Mr. Biden's personal attorneys "were packing files housed in a locked closet to prepare to vacate office space at the Penn Biden Center in Washington, D.C.," Sauber said in a statement to CBS News. The documents were contained in a folder that was in a box with other unclassified papers, the sources said. The sources revealed neither what the classified documents contain nor their level of classification. A source familiar told CBS News the documents did not contain nuclear secrets.

I’m relieved to hear it.

Since Merrick Garland opened an inquiry, something may come of this.

But I doubt it.

It’ll get swept under the rug like everything else Biden does.

Or will the House get involved and impeach him?

Again, this isn’t big enough for that.

Whatever happens, how about Presidents and VPs start handling essential documents with the care they deserve?

Why I’m Still Bearish on the Broad Market

I really, really want to be bullish, but the underlying macro is awful.