Markets Up on Potential Peace Deal

Whats an Irish seven-course meal?A six-pack and a potato!That was one of Philosopher/Truck Driver John Rings favorite old jokes.It always makes me laugh.Though my name is Sean Ring, according to 23andme.com, Ive got only 1.1% British-Irish blood.I dont think theres any Guinness in this part of the world, but Ill raise a glass to you on Amateur Night.So Happy St. Patricks Day, whether youre Irish or not! Its a fine Thursday morning here on the island. The sun shines brightly against the mountain background and the Fed is actually doing something constructive!In the Feds case, doing nothing was not doing something.The Fed did nothing for years.It stood idly by as inflation took off, the supply chain cratered, and prices rocketed.Finally, Jay Powell and his crew lifted rates a quarter of a point. That 0.25% or 25 basis points, in bond market-speak.A basis point is 1/100 of 1% or 0.0001. Basis points get shortened to bps (pronounced bips).Its easier to say, The Fed hiked 25 bips, instead of The Fed hiked zero point two five percent.Every market has its quirky conventions.In this edition of the Rude, Ill talk about what the Feds long-anticipated move may mean across some of our favorite asset classes.

Interest rates have been on the floor since 2020.Have a look at this graph from the Journal: 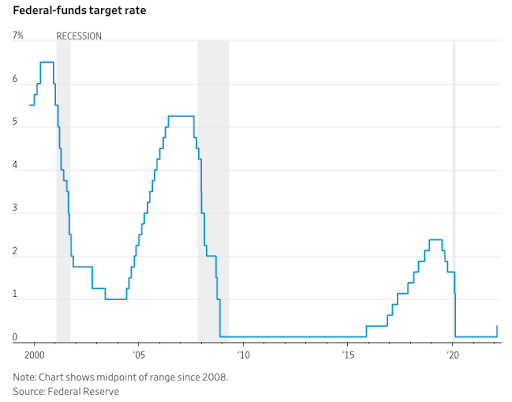 Credit: The Wall Street JournalThe era of cheap money has lasted far too long.Companies simply dont pay for their mistakes when they can constantly roll over their debt at no cost.The layman simply has no idea how incentives are distorted by this cheap money.I laid out my case against low rates here, so you can read that again if you like.Of course, that the Fed raised only 25 bps doesnt mean rates are back to normal: far from it!But its a start.Unfortunately, the endgame gets uglier.The last time the Fed tried a full-throated tightening was from 2016 to 2018, and it didnt go well.After hikes at nine nearly consecutive meetings, the Fed got its base rate to about 2.5%. (The Fed now does a target range, so the range was 2.25%-2.75%.)It wasnt high by historical standards, but it was enough to trounce the stock market.Trump and Powell lost their taste from hiking and cut the rate down to under 2%.Then the unknown virus of unspecified origin hit, and the government-mandated private sector shutdown started.It was enough for Powell to put the rate range at 0% - 0.50%.Weve been bottom fishing ever since.

Interest rates and the economy

Rates will rise, but the USG cant handle that.

The debt burden is $30 trillion and counting.

That means every 1.00% rise in interest rates adds another $300 billion in interest payments.

The great economist Ludwig von Mises wrote in his masterful Theory of Money and Credit:

In this great conflict, the advocates of public control cannot do without inflation.

They need it in order to finance their policy of reckless spending and of lavishly subsidizing and bribing the voters.

The undesirable but inevitable consequence of inflation, the rise in prices, provides them with a welcome pretext to establish price control and thus step by step to realize their scheme of all-round planning.

The illusory profits which the inflationary falsification of economic calculation makes appear are dealt with as if they were real profits; in taxing them away under the misleading label of excess profits, parts of the capital invested are confiscated.

In spreading discontent and social unrest, inflation generates favorable conditions for the subversive propaganda of the self-styled champions of welfare and progress.

My guess - and its a guess - is that Powell wont get his Volcker hat on and raise rates all the way to historically normal levels.

Hell hit a wall again and then retreat.

But Russia did give him cover, thats for sure.

I had some conversations with friends before the hike.

My estimate of a 25 bps hike was heavily caveated.

I said to a friend, He may not go at all with the Russia situation.

Im glad Powell did hike, but its just a token gesture until it becomes a trend.

And then well have to start worrying about the inevitable market downturn that accompanies repeated rate hikes.

But thats for later.

Both stocks and bonds should suffer from repeated rate hikes, but that may not be the case immediately.

In fact, at the start of rate hiking cycles, stocks tend to do rather well.

As for bonds, with inflation the way it is, I dont want any of them. Not governments, investment grade, or junk.

Heres where it gets interesting.

Gold and silver should - should - in theory, fall because of the higher cost of carry.

That is, as rates go up, it gets more expensive to store and insure the metals, as well as losing out on the higher interest rate youd earn on cash held in an account.

But if inflation starts to run away, gold and silver will rally. Pretty hard, I think.

So the former hypothesis is in play.

I cant see base metals like copper, nickel, or aluminum continuing their ascent for too long as the Fed attempts to create a soft landing.

But that will almost certainly turn into a hard landing.

As Jared Dillian of The Daily Dirtnap says, Stocks bottom in a V shape . Commodities top in a V.

Both Bitcoin and Ethereum have recovered, or at least stabilized, recently.

But I continue to be concerned about rising interest rates and their effect on the leverage financing the crypto space.

If rates continue to rise, we can see a significant sell-off here.

Remember, in crashes, all correlations go to one.

For now, it seems the markets are comfortable with rate hikes and that the potential peace deal between Moscow and Kiev has given the markets a boost.

Its excellent news for the Ukrainians suffering right now, and Im happy for them.

Im also happy Powell made the right call on rates, though, at this point, he may be just rearranging the deck chairs on the Titanic.

In the meantime, get out tonight, have a pint of Guinness, and listen to the Rocky Road to Dublin.

Until tomorrow, with or without a hangover.

P.S. At least we know publications like The Atlantic should always be taken seriously: 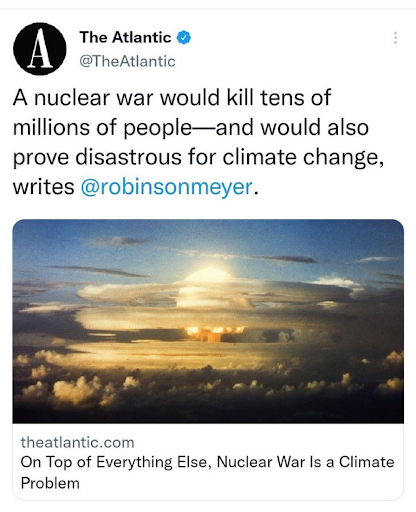 Heres Joe Conchas tweet on it. And the article is here. Really.

Without Russia’s 245,000 barrels per day, the US needs oil from somewhere else. Instead of releasing its stranglehold on the US oil industry, Biden turned to Maduro. The embattled Venezuelan president can’t...