Good morning on this fine Tuesday.

Napoleon Bonaparte once said, “If the Earth were a single state, Istanbul would be its capital."

I’ve been to the Turkish capital at least a half-dozen times, and it’s a treat every time.

I’ll be there again this September, flying through on the way to Hans Hoppe’s shindig in Bodrum.

I haven’t been there in years, thanks to the “unknown virus of unspecified origin,” as the Critical Drinker likes to put it.

I can’t wait to see old libertarian and Hoppean friends who know what’s going on in the world.  If I carefully avoid the left-libertarians who sneak in, I’ll have five full days of sanity.

But that’s another subject for another time.

While the New York skyline awed me in my youth, and London’s history dazzled me for ten years, Istanbul is perhaps my pick for “greatest city on Earth.”

What if I told you Istanbul had Sydney’s harbor, Rome’s antiqueness, London’s skyline (though the church spires are replaced with minarets), and Western Asia’s exoticism?

It’s one of those places I think everyone should visit at least once.

And once won’t be enough, once you taste the cuisine.

So you understand it’s not odd that I’m interested in Istanbul in particular and Turkey in general.

And Turkey made some temporary waves that I wish were permanent.

So what happened?  Let me tell you about it.

Sweden and Finland Poop the Bed

So triggered by Russia’s invasion of Ukraine, Sweden and Finland dropped nearly eight decades of neutrality and non-alignment.

But like Norway, Sweden won’t accept nuclear weapons or military bases on its soil.

As Sweden and Finland already participate in NATO exercises and have advanced militaries, I’m not sure how formally joining NATO changes the math all that much.

Speaking of change, I thought I’d show you how the map of Europe has changed since the 1980s.

First up is the map of the original NATO and Warsaw Pact countries: 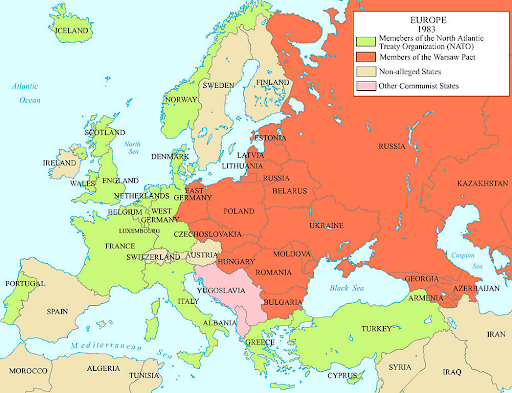 This is the map of Europe now: 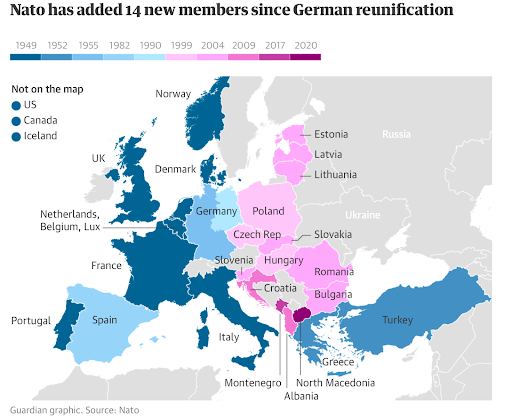 Credit: The Left Berlin via The Guardian

Not one inch eastward, aye?

Turkey Negs the Bid… or Did They?

Unexpectedly - and quite hilariously - Turkey has made noises it won’t accept NATO’s newest applicants.

Each NATO country has a vote on new applicants and the alliance’s vote for accession must be unanimous.

Turkey has never been comfortable with Sweden and Finland harboring what Turkey calls terrorist groups.

Turkey accuses them of hosting Kurdish organizations, such as the PKK (the Kurdistan Workers' Party) and the YPG, its offshoot in Syria.

Joke Biden also managed to piss off one of NATO’s most loyal and longest serving countries.

Turkish President Recep Tayyp Erdogan recently said, “We had good relations with Obama and Trump and had no problem talking. Have we achieved the same with Mr. Biden? No, we haven’t. That wasn’t what we wanted,”

But more importantly, the Turks haven’t sanctioned Russia and don’t want the situation to escalate any further.

From the European Council on Foreign Relations:

Senior Turkish officials are quietly concerned that the conflict is now turning into a NATO-Russia war and that the risk of escalation is growing, fuelled by greater arms support for Ukraine and the absence of a negotiations framework. They are also disappointed with the West’s reluctance to rally behind Turkish-brokered ceasefire talks. High-level Turkish officials have accused “some NATO countries” of not wanting the war to end in order to harm Russia.

Most political commentators whose work I’ve read agree that Erdogan is merely raising the price of membership.

Sweden suspended any arms sales to Turkey in 2019 over Ankara's military operation in neighboring Syria.

That suspension will likely be dropped.

Joke Biden will probably be cajoled to call Erdogan to give him some love, as well.

In the end, I suspect Sweden and Finland will enter NATO.

NATO Gets More of the Russian Border

For NATO, this is a coup, as it will get an additional 1,300 kilometers of Russia’s border. 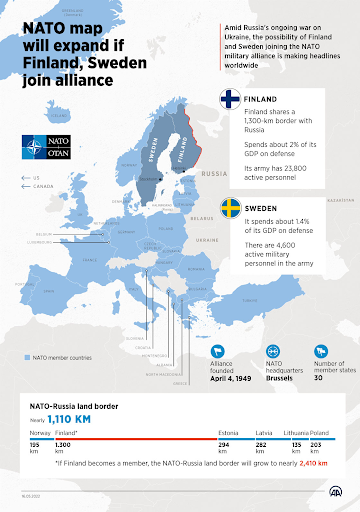 You don’t need to be a military strategist to figure out what this means.

The Russians are well aware of it and aren’t happy about it.

But then Russian President Vladimir Putin seemed to relent.

“As for the expansion [of NATO], including through new members of the alliance — Finland, Sweden — Russia wants to inform you that it has no problems with these states,” Putin said on Monday, speaking at a gathering in Moscow of leaders from the member countries of the Collective Security Treaty Organization (CSTO), the Russia-backed military alliance.

“Therefore, in this sense, expansion on account of these countries does not pose a direct threat to Russia.”

“The expansion of military infrastructure on this territory will undoubtedly cause us to respond,” Putin told the leaders of the five former Soviet republics, adding that NATO’s “endless expansionary policy” also “required additional attention on our part.”

If I were a betting man, I’d say Putin is fine with Sweden and Finland entering NATO on their terms (no nukes or bases).

There really is no material difference, especially if Moscow doesn’t plan to invade.

The money-sucking dinosaur known as NATO will get two members.

Sweden and Finland will be admitted, though I’m unsure how NATO changes.  (The Washington Post has some good statistics here.  It’s just the land border that changes.)

With Moscow not caring so much about the new additions, it’s absurd for Turkey to object to them.

Of course, politics is the theater of the absurd, so I suspect Erdogan will get his weapons ban lifted and a joint press conference down the road with the US President.

At least someone is getting something out of this!

Of course, I would rather the erstwhile Turkish President do something about his ailing lira, which is currently trading at 15.61 to the USD.

But not yet!  I’ve got a holiday in Istanbul and Bodrum coming up.

“Excuse me, I Ordered a Sucker’s Rally…”