I can’t tell you how happy I am.

Finally, after years of searching, I’ve found the magic pill.

It’s the root cause of everything.

Everything wrong in this world is Russia’s fault.

Not a single minute goes by where that country doesn’t create havoc somewhere in the world.

And in this edition of the Rude, I’m going to prove it to you.

John Kenneth Galbraith once said that pessimism is the mark of true intelligence.

But I’m going to prove to you that Russia is the cause of the world’s ills.

Because it’s all Russia’s fault.

In an earlier edition of the Rude, I wrote that Justin Trudeau was acting like a third-world dictator.

I thought that his invoking the Emergencies Act was heavy-handed, unnecessary, and an admission of failure.

I thought his “leadership” - his word, not mine - was utterly non-existent and that he should resign.

But I was wrong.

Had I done just a cursory bit of research, I would’ve known that it was all Russia’s fault.

The CBC even said so.

So shame on me for not looking just that bit harder.

Inflation?  Not Our Policies…

My goodness, had I known Vladimir Putin was responsible for the West’s inflation, it would have saved me so much trouble.

I mean, I thought that Jerome Powell’s asinine money printing started us off.

I mean, that red line, which is the linear depiction of Jay Powell’s tenure at the Fed, isn’t an exponential increase, is it?

And it’s not Joke Biden’s fault canceled the Keystone XL pipeline, is it?

After all, Biden had constituents he had to pay back for getting him into the Oval Office.

Surely they didn’t think it would increase energy costs.

And let’s not forget: he had to shut down the entire country for Covid.

We know he means well as he just extended the national emergency.

That indeed wouldn’t have a significant effect on, you know, supply chains.

At least it’s been a boon for management consultants who advise companies how to get their products from A to B.

Because it hasn’t been this hard for physical products to get from A to B since the Age of Sail.

And never mind the Germans!

Former Russian President Dmitry Medvedev had this to say:

It seems like Russians think that tightening supplies will lead to higher prices.

I don’t know where these Russian people learn their economics because that’s not what the Germans think.

In fact, they’ve just made an action figure of him: 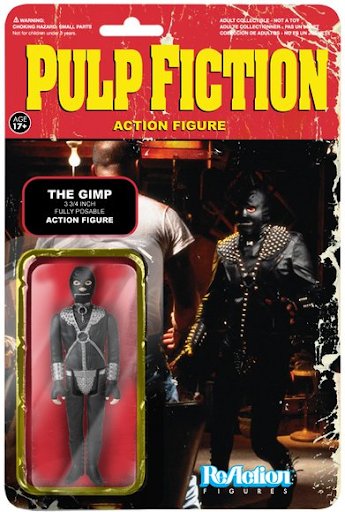 Thanks, Vlad, For Tanking Our Markets

Just have a look at what old Vlad has done to our stock markets: 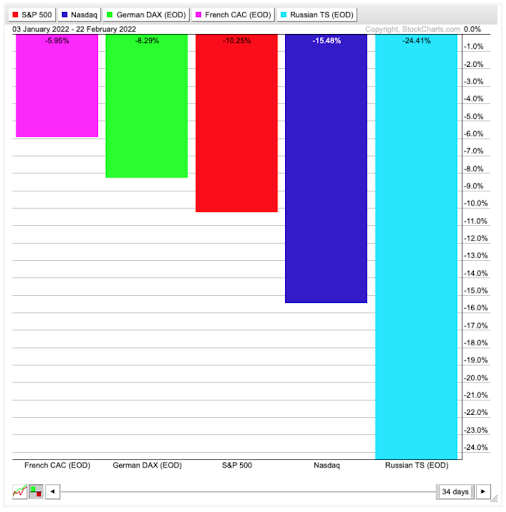 Russia is a mess.

But both the S&P 500 and the tech-heavy Nasdaq are double digits down.

The German Dax is getting spanked as well.

But the French aren’t taking on as much water.  I wonder why that is.

Perhaps it’s because they didn’t stupidly shut down their nuclear plants after the Fukushima disaster as the Germans did.

But really, it’s probably because of Russia. 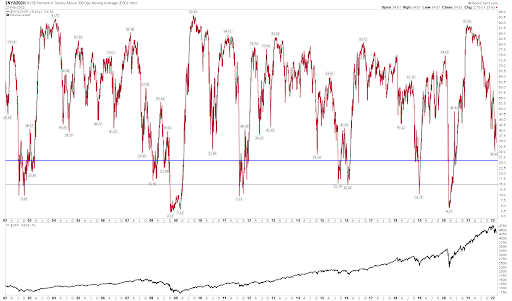 That chart’s line represents the percentage of NYSE stocks above their 200-day moving average.

Excellent chart analyst JC Parets says you don’t want to own stocks below the lower horizontal line of 15%.

But that brighter blue line above it, which I drew, is the point of no return.  That is, if the percentage drops below 27%, it’s nearly a certainty that it’s time to sell stocks.

We’re not there yet, but we’re getting close.

But that’s because Vlad and the Ukraine thing, surely.

It looks like the yield curve is going to invert again.

The yield curve has been a good predictor of recessions.

If you look at the above chart, when the blue line goes below zero, a gray box appears soon after.

The blue line is the 10-year yield minus the 2-year yield.

The gray boxes are recessions.

Bond yields have risen this year, for sure, but not equally across the curve. 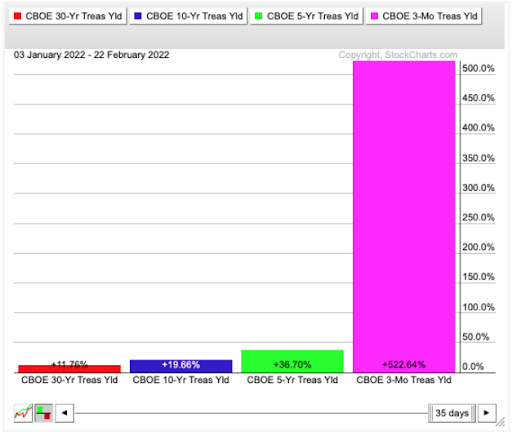 As you can see, 3-month yields have increased far more than either the 10-year or 30-year yields.

That’s what we call a flattening of the curve.

If the curve flattens enough, it eventually inverts.

And that means a recession is on the way.

Technically, a recession is when GDP shrinks two consecutive quarters.

But the populace feels it much sooner.

And that’s all Russia’s fault.

Boy, there’s not been much of a “safe haven” here, either: 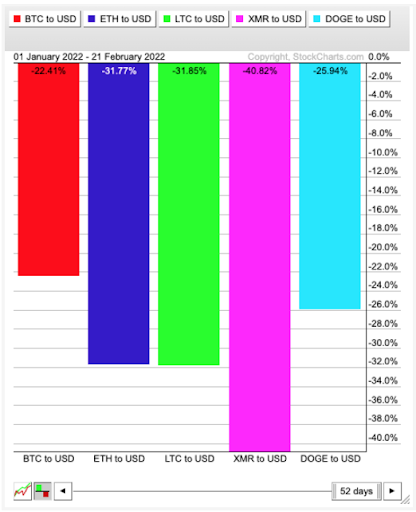 As my son Micah would say, “Ouchy…”

But after The Trudeau Experiment - or the Russian Trucker Hack Experiment - runs its course, I think you’ll be happy you dipped your toe into the crypto world.

Volatility is to be expected with brand-new asset classes and technology.

Twenty years later, its performance has justified itself.

But even if you don’t have 20 years to wait, it’s still good to have a small proportion of your assets in crypto.

Even if you have to worry about Russian hackers. 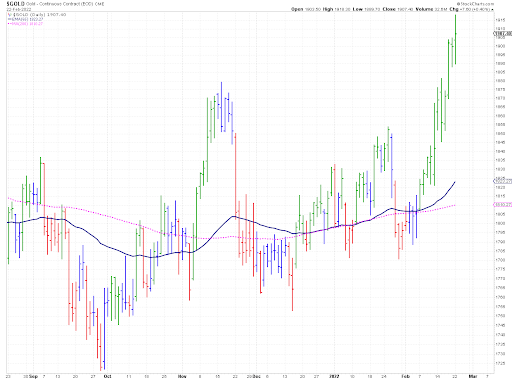 This is a sophisticated Russian plot as well!

Look at this chart, showing the percentage of reserves held in gold by foreign central banks. 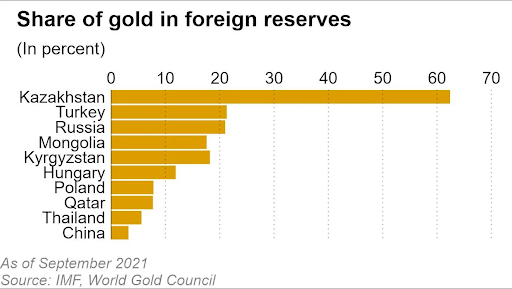 This is because Russia wants to be free of the dollar entirely and trade the way it wants to.

But it’s all their fault anyway.

There are rumors of Jim Rickards rejoicing, but I can’t imagine Jim ever rejoicing over anything!

Well, as I’ve proven, everything on planet Earth is Russia’s fault.

What a demigod he is!

If only Joke Biden and Boorish Johnson had such power to wield!

No disease would exist, the markets would perpetually rise, and Pam would think my farts smelled like roses.

Ah, what a world it would be!

Who’s the Fool in This Deadly Serious Game?

My eminent colleague Jim Rickards gave us a gem of a call last night. I got to listen to Jim with an open mind and my morning cup of coffee. He’s an...