Good morning from sunny - and newly locked down - Cebu.Its not a complete lockdown, but its stupid enough, especially with the lights still out in large parts of the city.Its times like these when I wish my 5G didnt work.I opened my WSJ app, and there it was, plain as day.The messengers wrote the first taster op-ed proposing an entirely old candidate for President.Yup, its Hillarys time, once again.

The only time I ever voted in a Presidential election was in 1996, just before I turned 22. My 18th birthday came a month after the 92 race.Who to pick? Bill Clinton, the incumbent, or Bob Dole, the feisty old Senator?It was easy for me.Bob Dole, World War II veteran. Bob Dole, the sober senator, himself married to a strong woman, Elizabeth. Bob Dole, who tried to defend Big Tobacco well, no ones perfect.It was an easy choice for me.Even then, I didnt like the Clintons stuff.Whitewater, Travelgate, Hillary Care, Vince Foster, the 1994 midterm blowoutI simply couldnt fathom why anyone would vote for Clinton getting another term.It was my first lesson in voter apathy and incumbent advantage. Voter turnout was 49.0%, the lowest for a presidential election since 1924.Dole simply couldnt get conservative democrats to pull the lever for him.He lost handily, both in the popular vote and the electoral college.Bill Clinton would go on to greater things in his second term, like Monica Lewinsky, the Clinton Foundation, and Jeffrey Epstein, but I digress.

Being First Lady doesnt qualify you to be the President of the United States.Close, but no cigar. <wink>But early on in his first term, Bill gave Hillary - who herself admitted to being totally unqualified for it - the job of remaking American health care. 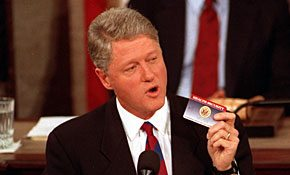 Of course, not only did that effort fail, but it led to national outrage, a $32 million bill for the project, and a $450,000 fine for Hillary.This disaster was probably most responsible for the 1994 red wave that kneecapped the final two years of Clintons first term.And while Clinton indeed beat Dole in 1996, both the House and Senate remained Republican.

When Daniel Patrick Moynihan retired from the Senate in 2000, Hillary Clinton decided to run for his open seat. This, despite never having resided in New York.Of course, she won, and with it became the first female senator from the state of New York. And for a little over two weeks, she was simultaneously First Lady and Senator, also a first.She voted for military intervention in both Afghanistan and Iraq.She voted against Dubyas two major tax cut programs.She voted in favor of the 2008-9 bailouts.Other than that, I can find a thing she actually accomplished as a Senator.

Its all Oprahs fault.Oprah chose her race over her gender, and Barack Obama was coronated as President.Hillary, crushed by that defeat, settled for Secretary of State.She didnt do much here, either. Maybe a Russian Reset? Nah.Just Benghazi, and then an exit after one term to prep her for her long-delayed ascent to the American throne.

Well, we all know what happened here.Trump beat her where it counts, in the electoral college.It was brilliant.That was that, wasnt it?I should have known better.In one way, Hillary Clinton is like Muhammad Ali. No matter how many shots she takes, she never goes down. 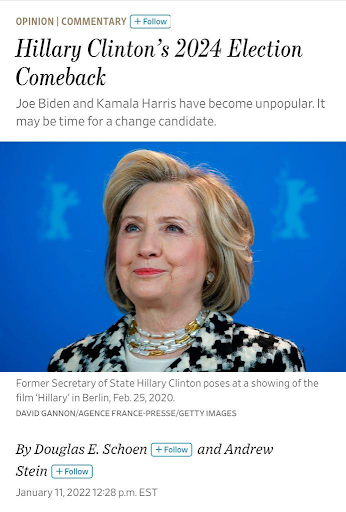 Biden and Harris have become unpopular?Seriously? They were never popular, to begin with.They were hastily picked candidates chosen to defeat a man who had lost his way during a hysterical reaction to a supposed pandemic.Joe Biden wasnt popular before he lost his mind or was elected president.If you want a compendium of Biden memes demonstrating this, have some fun here.In the primaries, Kamala Harris couldnt even win California, her home state.She was only chosen because shes a woman of a mixed-race background.It worked. Trump was defeated.But the Biden-Harris team, or rather the Biden and Harris teams, have been at each others throats since Day One.And thanks to Kamalas irritating personality, Biden has completely sidelined her.Shes not in charge of anything except staying out of the press.Biden himself continues to demonstrate his deteriorating cognitive state daily or whenever his team let him in front of the press corps.And whats worse for them is their teams now know there will be no Biden Conquered Covid headlines. Ever.Live by the virus, die by the virus.While Joe Biden claimed to have a plan, we now know multiple booster shots wreck immune systems. The WHO Director-General agrees.The Narrative is unraveling, and someone who knows what theyre doing must come in to save the day.

Though Hillary has no accomplishments to her name besides being Mrs. Bill Clinton, The Establishment may view her as a safe pair of hands.And thats where the Journal went yesterday.Sending out the feelers.Hoping, praying that the weakened masses would take the bait.Douglas E. Schoen and Andrew Stein write:

She is already in an advantageous position to become the 2024 Democratic nominee. She is an experienced national figure who is younger than Mr. Biden and can offer a different approach from the disorganized and unpopular one the party is currently taking.

If Democrats lose control of Congress in 2022, Mrs. Clinton can use the partys loss as a basis to run for president again, enabling her to claim the title of change candidate.

Hillary will be 77 when the 2024 election day rolls around. And shes not exactly spry.

And change candidate? Change back, maybe. And to what?

This is Democrat Desperation at its very best.

Right now, Im not sure Trump is going to run. And Im not sure hed beat Clinton in a second round.

So lets hope Ron DeSantis turns The Free State of Florida into a happy, rip-roaring economic and lifestyle machine before then.

Then, perhaps, he can get to work on the other 49 patients.

Lets get moving again. Stagnation isnt good. Motivation needs to be maintained and renewed. Time to break through the barriers to see new things or visit old friends.Happy Friday!I...