Good morning on this chilly Monday in Asti.

Yesterday was the Italian elections, and I actually voted.

No, I don’t think it mattered a bit.  But I wanted to experience the process.

Yes, you need a voting card… and an identity card to vote, unlike in America.

Amazing.  I had to prove who I was.

The idiots who tried to say the results were less than truthful were immediately poo-pooed.

It’s practically impossible to rig the vote in Italy.

My good friend and mentor, Addison Wiggin, always admonished me to write about one thing and one thing only.

And I usually stick to the Rule of One.

But today, I’ll slightly alter it.  The one thing I’ll write about is Europe.

While we’ll look at Europe mainly through the lens of the Italian elections, I’ll briefly visit the UK’s weak currency and a Dutch MP’s red pilling session.

The God That Failed and Inflection Votes

I’m not a Democrat and usually think voting wastes time.

But Brexit, Trump, the French elections, and the Italian elections are what I call “inflection votes.”

As in, they’re votes where you can - and should - stick your thumb in the establishment’s eye.

Here’s a picture of what happened in Italy yesterday: 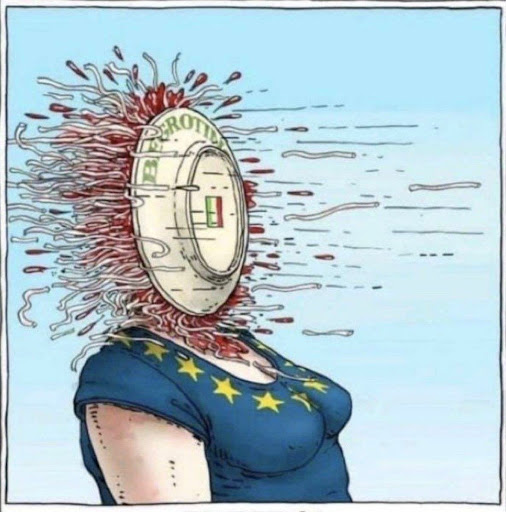 The effete French couldn’t pull it off.  Give me Italian machismo any day…

Italy: Now in the EU’s Crosshairs

Ever notice that the right-wing tends to make women prime ministers?

If you want an idea why the commies who run the EU hate her guts, watch this video.

Do I think Giorgia Meloni will swoop in and improve everything?

I’m too old and jaded to believe such a thing.  Or maybe I’ve seen too many false prophets.

But I’m more concerned the EU apparatchiks will undermine Meloni.

Italy's massive debt of roughly 150% of GDP, combined with Italy’s weak long-term growth record, makes the country vulnerable to bond-market selloffs if investors lose confidence in the soundness of Rome’s fiscal policies, and dependent on the European Central Bank to keep its bond yields stable.

In other words, the Berlusconi example of 2011 is still vivid - if Meloni's policies displease the ECB, Christine Lagarde will simply refuse (or forget) to buy Italian bonds, sparking Europe's next sovereign debt crisis at the worst possible moment.

And here’s why this is more a probability than a possibility: Meloni shifted gears during the election to become more palatable to voters.

(Marine Le Pen in France signally failed at this, which is why she lost to Macron this past May.)

However, the now-elected Meloni will probably revert to questioning the Russia sanctions, siding with Orban’s Hungary, and kicking up a fuss every time the EU tries to impose alphabet legislation (LGBTQ+) on the bloc.

She’s a white, heterosexual, Christian woman (though a single mother).

She’s everything the commies in Brussels hate - and Pooty Poot loves.

So there’s a not-so-small part of me hoping Meloni shows her true colors, pisses off the EU, and blows up the euro.

My goodness, what a sight for sore eyes that would be!

What Happens When the EU Dislikes Your Picks

And if you don’t think the EU is vindictive, I’ve got news for you. 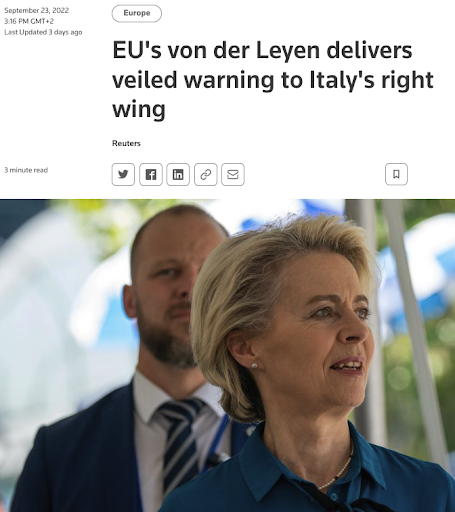 The Worst Woman in the World™, Ursula von der Leyen, the President of the EU Commission, talked about the Italian elections after giving a speech in Princeton, NJ.

Here’s what this champion of democracy had to say:

My approach is that whatever democratic government is willing to work with us, we're working together.  If things go in a difficult direction, I've spoken about Hungary and Poland, we have tools. 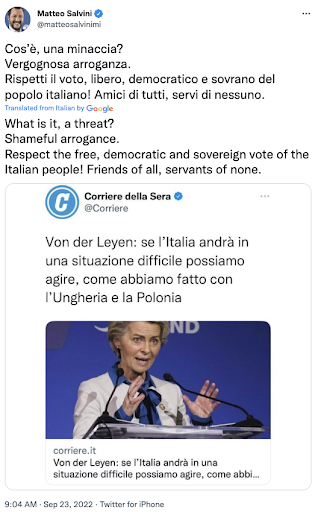 Polish Deputy Justice Minister Sebastian Kaleta was none too pleased about the remarks, either.

Here’s what he had to say: 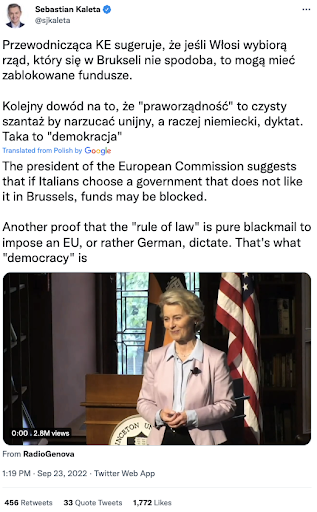 Ursula von der Leyen looks like the perfect vassal in front of that flag, come to think of it.

But it’s interesting to note that Italy is one of the EU’s largest net contributors.  That is, Italy pays into the EU far more than it takes out.

And with the UK no longer contributing to the bloc, von der Leyen should check who’s paying in beside her beloved Fatherland.

What Happens When the Market Dislikes Your Picks

Well, the market is rightly concerned that the new Italian government will try to buy off voters with bread and circuses.

Honestly, I don’t blame it.

It’s also concerned about the aforementioned ECB blackmail, should Meloni get out of line.

Since the right wing had been sniffing victory, the spread between Italian bond yields and German bund yields has blown out.

They’re not at the 2011 Sovereign Debt Crisis levels yet.  But they’ve roughly doubled in a year and show no signs of slowing down. 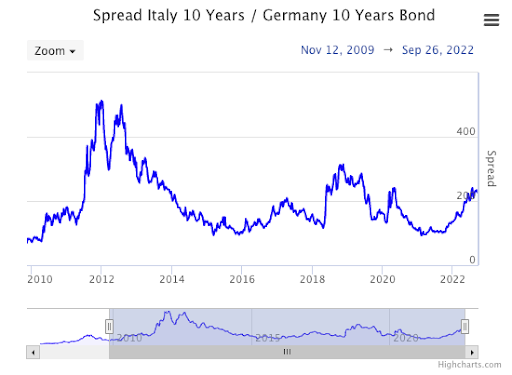 Why do we watch government bond spreads?

Because it tells us how much more expensive (yield-wise) our bonds are compared to the benchmark bond.

In Europe, the German bund is the benchmark.

So the Italian government must issue bonds at a much higher yield than the German government.

Because the market views the Italian government as riskier.

If they blow out much more, the ECB will have to buy more Italian bonds to keep their yields down.  (Prices up, yields down.)

A spread above 300 basis points, or 3%, would indicate big trouble.

The market?  Not so much. 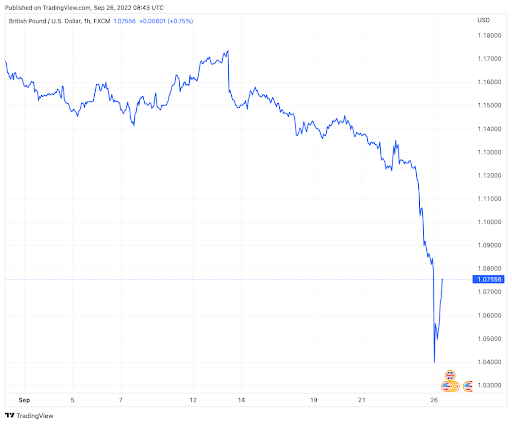 Famed trader and founder of the Options Trading Academy Simon Rees wrote this on LinkedIn:

Early hours of Asian trade we saw what can only be described as a "flash crash" in GBPUSD.

This comes hot on the heels of the surge in the yields of Gilts on Friday.

If you haven't traded FX before, such moves may not seem like a huge deal.

If you have ever traded FX, you will appreciate that moves like this in a major FX pair are almost unfathomable. I can only imagine the $billions in stop losses that were triggered. Someone got rekt...and we could see forced liquidation in other asset classes as a result.

Friday's drop on GBPUSD was already the 4th largest drop since the 1990s. Nearly the size of the move we saw on "Black Wednesday" when Soros famously "broke the Bank of England" which was forced to withdraw the pound from the European Exchange Rate Mechanism.

What we are witnessing is a COMPLETE LOSS OF FAITH in the UK government - and by extension the Bank of England - following Kwarteng's "mini" budget. The proposed tax cuts are resulting in a projected blow-out in public borrowing that the market is clearly uncomfortable with

Larry Summers and others have said the GBP is trading like an emerging market currency. Normally when a DM currency goes up, it tends to lead to capital inflows and a strengthening exchange rate. Whereas in EM, rising rates tend to signal desperation in the face of inflation. The UK keeps offering more yield but it's not stopping the bleeding in GBP

The UK is now faced with sluggish growth, high inflation, high debt levels and twin deficits. Truss' trickle-down proposals would seem to be a large step in the wrong direction at this juncture.

In the short term, I’m sure Rees is correct.  Long-term, I’m cheering for Heath and Mitchell.

One last thing: Watch this speech by Dutch MP Thierry Baudet.  It reminds me of that scene in Quantum of Solace when James Bond calls out the members of Quantum at the Opera.

Truly extraordinary.  And this was in Parliament. 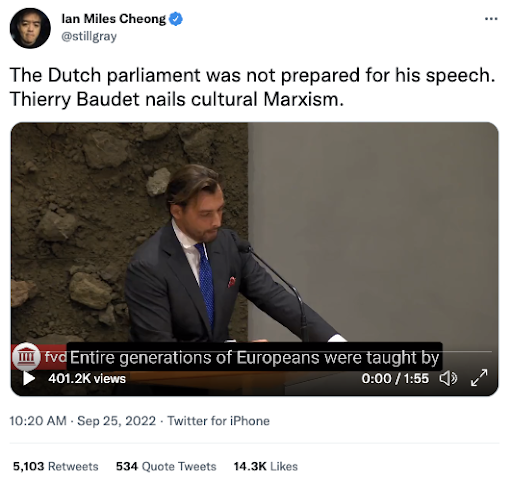 Europe seems to be coming apart at the seams.

In this unusually long Rude, I wanted to show you Italy’s, UK’s, and the Netherlands’ predicaments.

The continent is on fire, and there’s no water pressure in the firehoses.

Thanks for reading this long.