A Citi trader fat-fingered an extra zero onto a trade about a month ago.This sent the OMX Stockholm Index down over 100 points.From Zero Hedge:

Fast forward to today when we find that said shitty math'ed fat-finger will cost Citi losses of at least $50 million, according to Bloomberg, while adding that the bank is still tallying losses from the mistaken trade and the final figure could balloon even higher.

As we also reported before, the fat finger took place when a trader in the firms Delta One trading unit in London was working from home during a bank holiday on May 2 when the person incorrectly added an extra zero to a trade early in European market hours, sparking a furious five-minute selloff in the OMX Stockholm 30 Index which quickly spread across markets from Paris to Warsaw, wreaking havoc and wiping out 300 billion euros ($322 billion) at one point. 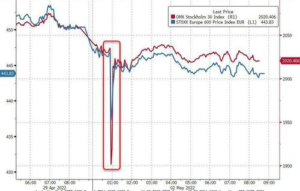 A few words from me on this.

Luckily, I was only a futures broker, so it was next to impossible for me to lose that kind of cash accidentally.

At least the first time.

However, a $50 million mistake will get you fired immediately.

Im sure this broker didnt mean to make this mistake.

Adding an extra zero when typing in a trade is surprisingly easy.

But clients trading this amount early in the morning, before the market is liquid, seems dumb to me.

Why You Dont Trade With Low Liquidity, Unless You Want To Set Off An Avalanche

Ill never forget this one time when a hedge fund manager called me up.

A market order is when a client specifies only the trade volume, but not the price. Market orders incur gap risk, which means the markets can move far from the initial market price. This happens when the market is illiquid.

As a broker with a fiduciary duty to my client, I said, Its 6:30 am London time, 1:30 am New York time. Theres no liquidity in the market right now.

I sold 2,000 10-years and sank the market one whole point. (Its an enormous move in that particular market.)

As a young broker, I didnt divine that this client wanted to tank the treasury market.

This client intended to set off all the sell stops to shake the weak longs out of the market.

It worked. You see it all the time in the gold market nowadays.

But most of the time, big moves like this are an accident.

Operational risk is defined in the capital framework as the risk of loss resulting from inadequate or failed internal processes, people, and systems or from external events. This definition includes legal risk but excludes strategic and reputational risk.

The people part is the problem.

And not just because people still input trades.

Now you may say, Well, just be more careful!

But things get dicey when a client is screaming down the phone to get his trade done.

Ill never forget when a trader blew up the German bond futures market.

I was sitting at my trading desk with my feet up, as it was that quiet

The next thing I knew, my dealerboard lit up like a Christmas tree.

At first, I thought it was a malfunction.

But then I saw my biggest clients button flashing.

I picked up the phone.

What happened to the bunds?

They had fallen off a cliff.

I had no idea why, but I said, Institutional selling out of New York.

I always said that when I didnt know precisely why something was happening.

I stood up from my desk to see my colleagues also standing up with their hands in the air.

No one knew what was going on.

About two weeks later, we found out it wasnt a fat finger.

It was an errant tray.

This trader was under a bit of stress.

Allegedly, his wife was pregnant and imminently due to give birth.

His dealerboard was flashing her phone number as he was coming back from lunch.

He caught the blinking button as he came around the corner with his lunch tray.

He put the tray down to pick up the phone.

It was his wife, calling to say everything was ok.

This trader was looking at his screen, seeing the German bond market tanking.

Since he was the German bond trader at his firm, he was puzzled.

Until he realized he inadvertently set his lunch tray down on the sell button.

He had sold nearly a quarter of a billion German bonds in a few microseconds.

His bank was sympathetic and didnt fire him.

The only reason why I dont mind reading about other traders misfortunes is that I didnt do it this time!

But these are the kinds of problems banks have been trying to solve for a long time, without much success.

Measure twice, cut once works for tailors because they dont have their clients screaming down the phone at them, WHERES MY GODDAMN SUIT!

Its much different when dealing with hedge funds, asset managers, and other banks.

In the meantime, bathe in your schadenfreude.

The so-called Masters of the Universe screw up regularly, with enormous consequences.

Inflation is a tax levied not by the government but by central banks. If they cant tax you to get what they want, theyll take it from you by...