“Excuse me, I Ordered a Sucker’s Rally…”

That means equities have two more sessions of ass whoopings before God rings the Friday bell.

I feel for you if you’re still long equity, smoking the hopium, and praying for Jay Powell to bail you out.

I hope you’re already out - and have been out a while.

As the English would say, this market is “whore’s drawers.”  (Up and down, up and down.)

I don’t mind a bit of volatility in the Nasdaq, as it’s a tech index, which means higher risk.

But when the SPX is all over the place, it’s wise to worry.

Mate, you’re on the money, I’m sure of that. I like Templeton’s 4-stages - I don’t think we’re even close to capitulation at the moment! And that always comes. This is just ‘sell in May and go away’ … October feels like when it will get really hard - as is often the case! I’m mainly cash and waiting!

Besides my overwhelming feeling of confirmation bias, I hasten to add Yorkshire Ian is very successful both as an entrepreneur and investor.

If you haven’t heard of them before, Sir John Templeton’s Four Stages of a Bull Market are pessimism, skepticism, optimism, and euphoria.

But Yorkshire Ian’s warning made much sense.  He continued:

🤔 there is an upside risk … war in Ukraine negotiates out before winter campaigning starts - as both sides reach mutually hurting stalemate over summer; energy prices fall; inflation headlines fall; large (dead cat) bounce - but it feels low probability for this year IMHO. Enjoy! 👍

I agree with that, as well.

Deep State has too much riding on this war to let the Ukrainians negotiate their way out of it.

Before I really get going, let’s look at the SPX.

I felt that Q2 would be awful and that we’d have a mild summer.

So far, Q2 has been an unmitigated disaster.

The SPX is down over 700 points since then.

And yesterday was the latest bloodbath in six weeks’ worth of them. 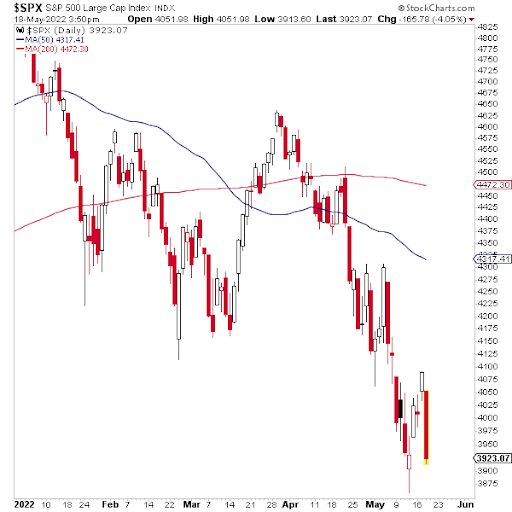 If you exclusively read The Wall Street Journal, you’d think it was all retail’s fault.

Yes, the same retail that yesterday reported an increase in sales for April.

As I wrote, it indeed was a rise.

But April’s number of up 0.9% was the smallest gain in a series of declining gains.

And whoever compiled the numbers clearly didn’t talk with Walmart or Target.

WMT was down a mere 7% yesterday…

…but it’s down nearly 20% in the last two sessions. 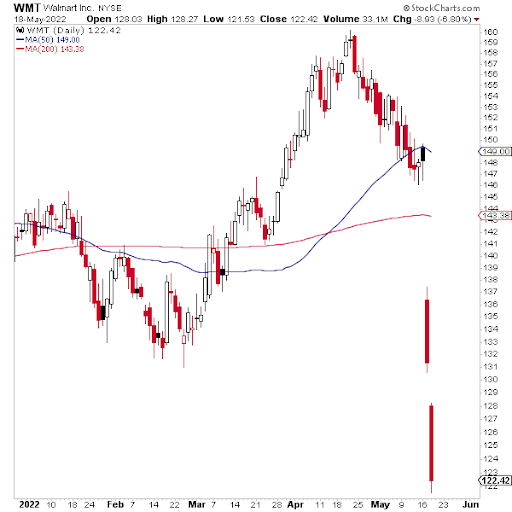 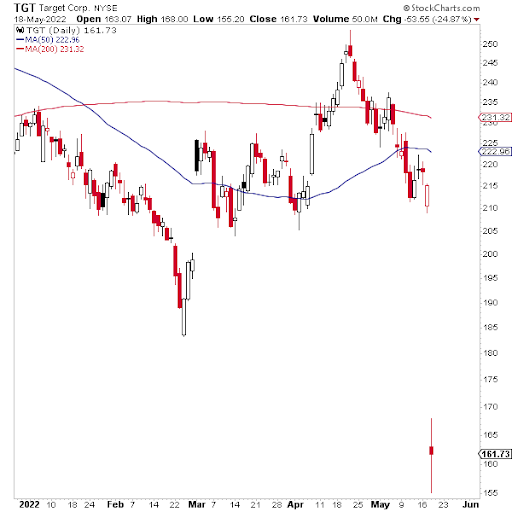 You can drive Philosopher-Truck Driver John Ring’s old Peterbilt through the gap in that chart.

It’s a damn superstore, not a tech stock!

To round out the retail rout, here’s Dollar Tree: 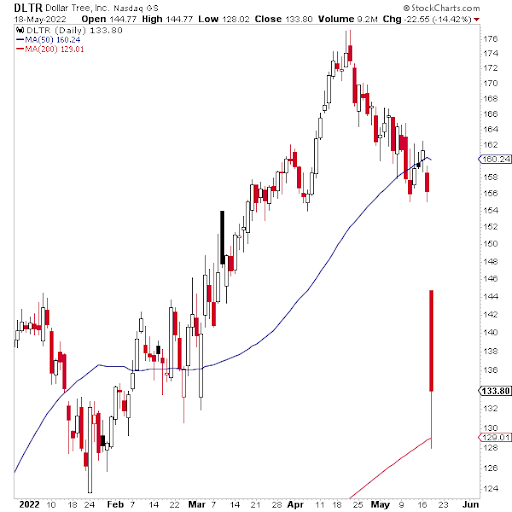 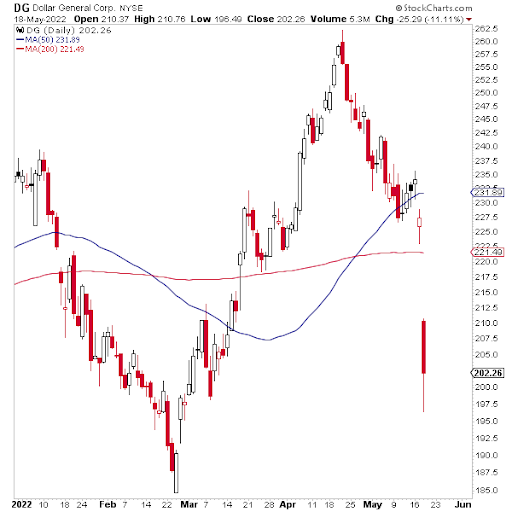 And Costco shareholders won’t be able to sit until next Tuesday: 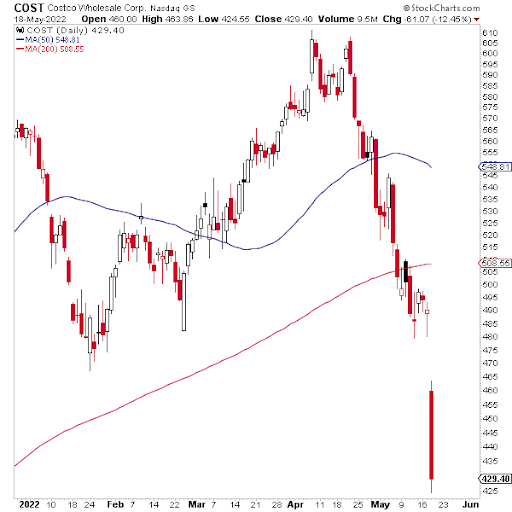 But enough about retail stocks. Let’s have a look at the real culprit. 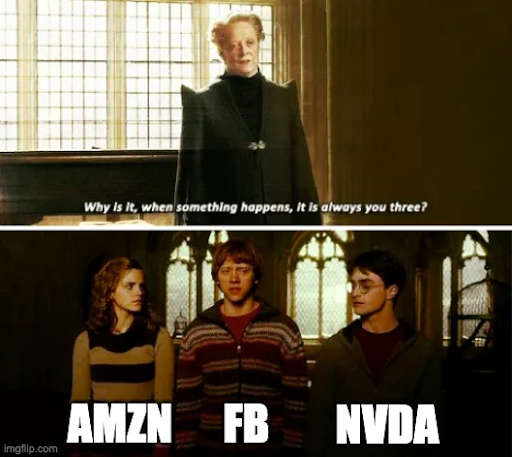 Sorry, I couldn’t help myself.

And right now, those three stocks could easily be AAPL, TSLA, and MSFT.

As Dow Jones owns The Journal, they write about the Industrial Average more than any other index.

Quick note: most institutional investors don’t care about the Dow because the WSJ editors pick the stocks that go into its price-weighted index.  The SPX is market capitalization-weighted, so it’s viewed as a more objective measure.

So when I looked a little closer, I noticed the Nasdaq was down 4.7%.

That was an even bigger drop than both the Dow and SPX.

Uh oh.  It was those tech guys again…

Don’t strain your eyes looking at this chart.

These are the FAANNGs plus TSLA and MSFT.

Since April 1st, the beginning of Q2 (the middle of the charts,) you can notice something.

They all go from the top left to the lower right.

That’s a simple downtrend, folks.  And it’s all of them. 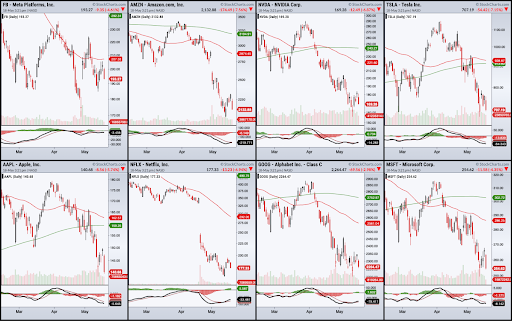 To make that point clearer, I went over to slickcharts.com.

There, they print the SPX constituent stocks, their weight in the index, and their performance for the day.

Every one of the top 20 SPX stocks, representing roughly 35% of the total index, was down. 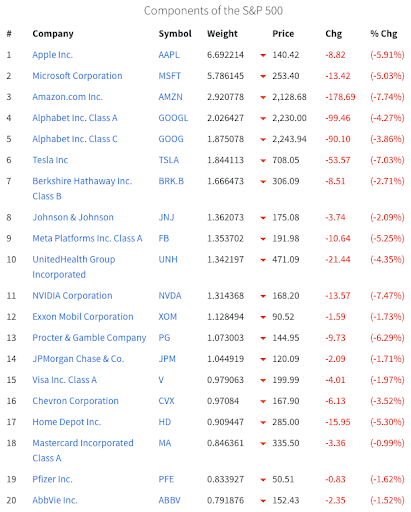 AAPL, MSFT, and FB were crushed as well.

Of course, Big Retail had a terrible day.

You can see PG and HD were hammered on the back of Walmart’s and Target’s earnings reports.

But this was a tech debacle, once again.

I never wanted to turn the Rude into a daily charting service.

People like JC Parets over at allstarcharts.com and Dr. Lev at thedailyshot.com are brilliant at it already.

But these wild movements demand an explanation.

With that said, let’s not miss the forest for the trees.

Then we can understand what’s coming home to roost.

I’ve talked about the Nixon Shock before.

That’s when President Nixon closed the gold window in 1971.

US dollars were no longer convertible to gold.

As a direct result of that move, we get distortions like this: 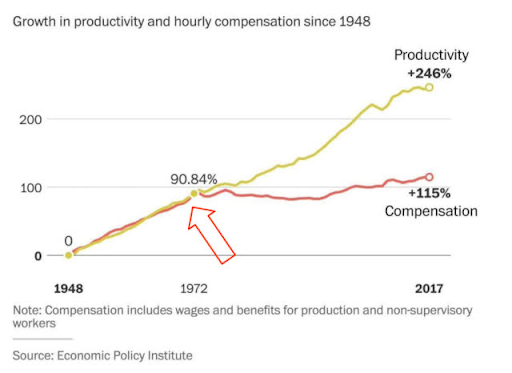 The productivity of production and non-supervisory workers has skyrocketed, but wages haven’t moved nearly in line with that.

Ben Prentice, one of the founders of the website WTF Happened in 1971?, put it as intelligently and succinctly as can be in this interview:

I think the greatest driver of inequality today is financial asset inflation, which is a direct result of monetary expansion.

When you increase the money supply, you're going to increase the costs of hard-supplied assets like stocks for example.

And the deterioration of the moneyness of money - because the store of value aspect of money is important - has led society to use financial assets as money, like stocks and real estate.

Many people hold their wealth in financial assets and every financial advisor will tell you, "don't hold dollars as a store of value."

My former colleague Nomi Prins has put together an entire series relating to this topic over at Rogue Economics.

I think it’s worth checking out if you have some spare time.

As Nomi is an economist, so her insights into the Nixon Shock and its subsequent effects on us are worth listening to.

At the Rude, we like to talk about getting a second passport, starting an online business, owning a bit of crypto, and getting in great shape.

Nomi has other exciting ideas on maintaining and growing your wealth that are worth listening to.

You can head here when you’ve got the chance.

Yesterday was an ugly day for stocks, whether it was retail or tech.

Inflation pressures are finally coming home to roost after both the 1971 decoupling from gold and the 2008 money printing extravaganza.

As the Fed hikes rates, inflation will come down.

But heavily indebted companies will have traded in old problems for new ones.

In the meantime, it looks like retail is in for a big downturn because folks can’t afford to shop as much as they used to.

This too shall pass… but when?

We were reminded of the bad old days when Dubya “misspoke.” Dubya mentioned the “brutal and unjustified invasion of Iraq.” He was speaking about a man he used to call “Pooty Poot.” Happy...