Get that fresh cuppa joe and enjoy it.  You deserve it.

Later, get that aged chalice of grape juice out.  You’ll need it.

The crisis, when it comes, will start on my side of The Pond.

But now - you’ll love this one - the Italians have blown up Europe politically.

Let’s call it “The Italian Job.”

And oddly enough, this time, life has imitated art. 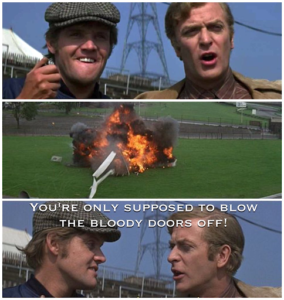 I’ll do a quick replay in bullet points first:

Thanks to Nancy in Hong Kong for sending me an excellent summary this morning!

Usually, the rest of Europe would sneer and laugh at the incompetence of the Italian Senators.

But this mess couldn’t come at a worse time.

Mario and His Amazing Technocratic Dreamcoat

Let me be plain: Mario Draghi is the embodiment of the Soros, Leftist, Globalist shill.

Mario Draghi OMRI is an Italian politician, economist, banker, former professor, and civil servant who has been serving as the prime minister of Italy since 2021. Prior to his appointment as prime minister, he served as President of the European Central Bank (ECB) between 2011 and 2019. Draghi was also Chair of the Financial Stability Board between 2009 and 2011, and Governor of the Bank of Italy between 2006 and 2011.

After a lengthy career as an academic economist in Italy, Draghi worked for the World Bank in Washington, D.C., throughout the 1980s, and in 1991 returned to Rome to become Director General of the Italian Treasury. He left that role after a decade to join Goldman Sachs, where he remained until his appointment as Governor of the Bank of Italy in 2006. His tenure as Governor coincided with the 2008 Great Recession, and in the midst of this, he was selected to become the first Chair of the Financial Stability Board, the global standard-setter that replaced the Financial Stability Forum.

Like Christine Lagarde, his ECB successor, he’s got many titles and almost zero accomplishments.

He’s most famous for doing “whatever it takes” to save the euro, a currency that would’ve died long ago if it were an economic and not political project. 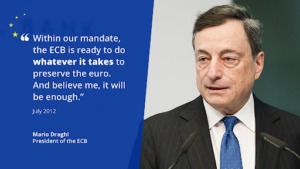 Much of the hardship Europe experiences right now are the result of his - and, to be fair, the entire European technocracy’s - monetary policies.

Lagarde has carried on those policies without hesitation.

And here’s the richly deserved result of that policy: 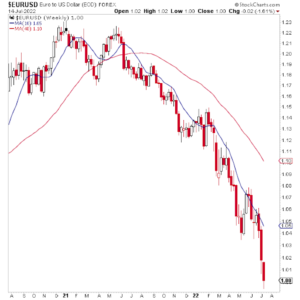 Now, he’s been hailed as the leader who put Italy to rights.

And the Oxford PPE majors who pen the practically unreadable Economist named Italy “country of the year” in 2021. 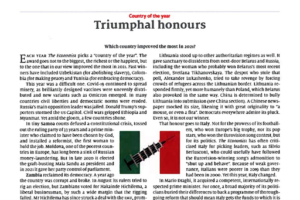 What’s With the Italian Coalitions?

In the United States, you’ve got two parties that essentially take turns running the place.

But in Italy and most of Europe, there are many parties to contend with.

Those parties form coalitions to govern their countries.

For all its faults, I prefer the US system.

At least you know which criminals are extorting you at any one time.

With Europe, you never know who’s running the show, with all the jostling and horsetrading going on.

Italy’s problem is that the Five Star Movement, a ragtag group of socialists, greens, and other drain circlers, has lost its way.

In the next election, they may well dissolve as a party.

Think of the Democrats without the established party apparatus.

To Red Europe’s horror, Italy’s right-wing is in a resurgence.

Opinion polls say that the Brothers of Italy, the Lega, and Forza Italia have 45% of the vote.

That’s unheard of, even in formerly fascist Italy.

Five Star has railed against Draghi’s economic policies as the last gasp.

They’re right to do so.

According to France24, Giuseppe Conte, the head of Five Star, said:

I have a strong fear that September will be a time when many families will face the terrible choice of paying their electricity bills or buying food.  We are absolutely willing to dialogue, to make our constructive contribution to the government, to Draghi, (but) we are not willing to write a blank cheque.

Still, Five Star is getting pilloried in the European press as I write this.

What Are the Knock-On Effects For Europe?

Common sense question: would you ever loan to the Italians at the same rate as you’d lend to the Germans?

If your answer is, “Of course not!” congratulations, you’ve got a functioning brain.

But this is, in a nutshell, the “Pan European” pipe dream.

One currency, one interest rate.

Except there are 19 finance ministries you’ve got to deal with.

That will increase to twenty with Croatia’s accession to the eurozone on January 1, 2023.

(My goodness, imagine congratulating Croatia on this move…)

So, there is no unified fiscal policy nor an automatic transfer mechanism like you’ve got with the United States and the USD.

Anyway, one of the things throwing Europe into fits right now is the spread between Italian and German ten-year bonds.

It has exploded lately, and rightly so. 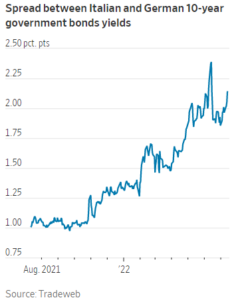 Italy is a far greater risk to your money than Germany is.

This is not to disrespect my country.

But since this simple economic truth is unpalatable to the European technocracy, they employ money printing to paper over the chasms within the common currency.

And here’s where it gets tricky for Europe.

If - when - the ECB decides to raise rates this autumn, it’ll bankrupt Italy.

But Italy is the third largest economy in the eurozone.

It’s one of the world’s great manufacturers, even with only half the country at work (the northern half).

But the crux of the matter is Ukraine.

Like most Americans, most Italians couldn’t give a toss less about Ukraine.

Russia was a friend of Italy and supplied it with cheap, plentiful natural gas and oil.

But Draghi, the aforementioned shill, just had to go all Atlanticist and Globalist on his rather apathetic population.

He was a “hero” during Covid, but the “political mortal” thanks to European unity on the Ukraine issue.

Even if he stays in for a while longer, he’ll only be in office, not in power.

Along with replays of the 2000 dot-com crash, the 2008 credit crisis, and the 1997 Asian currency crisis, we can now throw in the 2011 European sovereign debt crisis

Except this time, it won’t be the Greeks that set it off.

It’ll be an economy much, much larger, also in Southern Europe.

Let’s hope Italy relieves the world of the euro and doesn’t destroy itself in the process.

In the meantime, have a great weekend!

P.S. I’ll be writing live from the Big Apple for the next four weeks. I’m teaching three graduate programs in two different banks. Please forgive any hiccups, though I’ll do my best to ensure none happen. SR

We’ve been talking about the energy shortage for a while now. But one important group of minerals for fertilizer comes mainly from Russia and Belarus. Because of the sanctions, that mineral isn’t...