A Perfect Bullseye: The CPI Splits the Arrow.

It’s pizza day in the Ring Household, as it is every Friday.

But not before coffee… and then a crisp, cold beer with Mrs. Ring for lunch.

As you know, I love old movies. Casablanca, To Catch a Thief, and Raiders of the Lost Ark… all masterpieces.

But I’ve never mentioned my love for Errol Flynn.

Flynn was the one old movie star I could take watching with Philosopher-Truck Driver John Ring as a young boy.

And that’s because he played heroes.

Don Juan, Captain Blood, and, of course, Robin Hood were my favorites.

There’s this wonderful scene in The Adventures of Robin Hood where Robin enters the archery contest against all advice. The greatest archer in England would surely win the contest and give himself away.

But such is Robin’s hubris that he thinks he will win and manage to escape.

The poorly disguised Robin, who didn’t have a hope of fooling the great Basil Rathbone’s Guy of Gisbourne anyway, looks as though he’s lost the contest after all.

The archer before him shot a perfect bullseye.

Undaunted, the coolly arrogant Robin walks up to his shooting position, takes aim, and pulls back his bowstring. He lets fly his arrow… and against all probabilities, he splits the previous archer’s arrow.

In the movie, the announcer shouts, “He split the arrow!”

Robin is declared the winner but gets arrested immediately.

Of course, the Merry Men rescue him, and they all live happily after all.

But it was odd today. As soon as the CPI numbers came out, I swear I heard someone yell, “He split the arrow!”

This is a snapshot from MarketWatch:

Here’s a look over time: 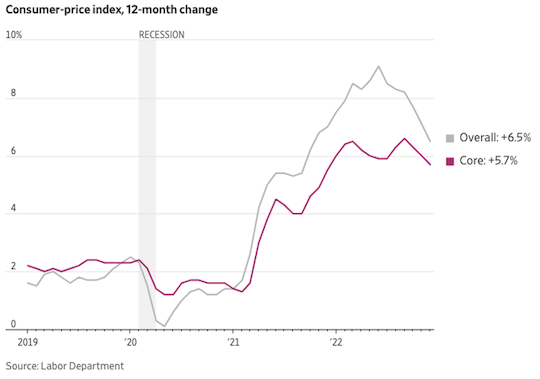 Since the numbers were right on the consensus, I expected equities to take off. But they didn’t, really.

It was a snooze fest, to be honest. The SPX barely moved, while the Nazzie and Dow were each up 0.64%.

However, the energy complex rocketed, with some stocks over 3% up.

But I couldn’t understand why the equities market - especially the Nasdaq - wasn’t zooming or why energy stocks were flying (with a seemingly low inflation number).

I proclaimed my confusion on Paradigm’s Slack channel and asked someone to explain the market reaction to me.

Enter Alan Knuckman to the rescue!

Crude is last of the assets to find bottom base...reality of rate hikes at end can’t help Dollar so only move is DOWN DX...
Crude 70-90 for six months closing in on 80 pivot for pop
MONEY MAKING energy stocks holding only 5% off fall top though crude is down 40%

Ah, that makes much more sense.

But I think I will have to reevaluate my dollar index thesis, at the very least.

At the end of the day, at least inflation looked like it was “tamed.”

Blindsided By the Jobless Claims

Let’s look at the numbers again, but focus on the ones in the green box:

Now here’s the interesting part: jobless claims came in much better than expected, with only 205,000 claims being filed versus the 210,000 consensus number.

Also, continuing claims edged down from 1.7 million to 1.63 million.

That probably means the labor market is still hot.

And that means Chairman Pow may have other ideas in mind.

What Will the Fed Do Now?

This is where we enter into the area of conjecture.

If you look at the chart below, the Fed and the market still disagree on when the Fed will stop hiking rates and start cutting them. 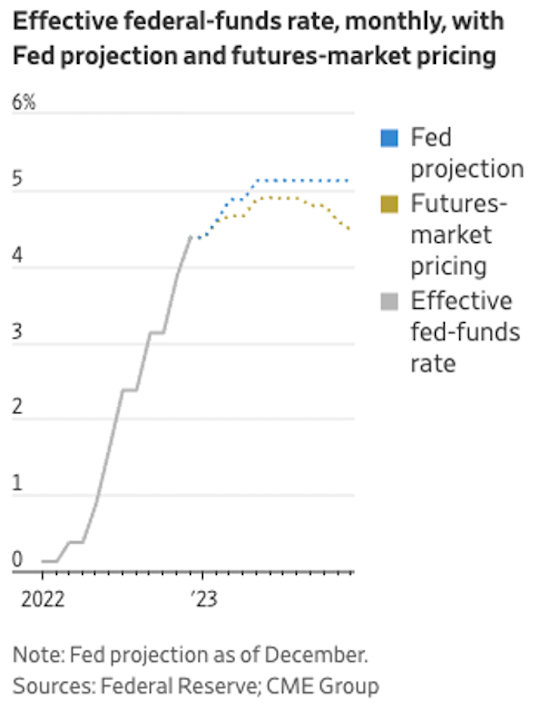 Do we still trust Chairman Pow to get to 5.25%? We must allow that it’s a higher probability that he will if the labor market continues to show the strength it has been.

And if we have genuinely seen the equities bottom, as men like Alan Knuckman think? Then surely Powell will keep his foot on the hiking brake.

However, are the bond vigilantes back? Will they force the Fed’s hand and make him cut?

That, too, is a possibility.

The futures market has the fed funds rate peaking at under 5% and cutting far before the Fed does.

This discrepancy between the Fed and the bond market must be resolved somehow.

Akane Otani and Nick Timiraos - affectionately (or not) known to The Street as NikiLeaks - write:

At their meeting last month, Fed officials projected interest rates will continue rising through the spring, to around 5.1%. None of them penciled in cuts this year. They have generally signaled a somewhat more aggressive path for interest rates either because they are less optimistic than investors, who see a speedier slowdown in inflation this year, or because they are less pessimistic about the probability of a serious recession.

This he believes because he is confident the economy will soon enter a recession — likely a severe recession — and it will be obvious even to the Federal Reserve.

They will therefore be compelled to execute the June about-face.

This forecast, also incidentally, rhymes very nicely with our own.

My money’s on Jim and Brian.

Either way, get out the popcorn.

As there’s a US holiday on Monday, there will be no Rude.

So, I wish you a wonderful, restful long weekend.

The next leg in equities looks up, not down, thanks to sheer market will.